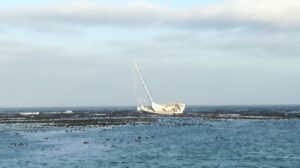 Greenings aground.
pic by NSRI Kommetjie

But early on, and within hours of the start, the winner of the first 2 leg, Greenings, ran aground.

The NSRI report stated:
At 22h34, Tuesday, 31st October, NSRI Kommetjie duty crew were activated following a report from MRCC (Maritime Rescue Coordination Centre) of a yacht run aground at Olifantsbospunt, Cape Point with 18 crew onboard.

The Clipper Round the World Race yacht CV24 (team Greenings) requested assistance reporting her 18 crew were in no imminent danger but the yacht had run aground on rocks at Olifantsbospunt, Cape Point. 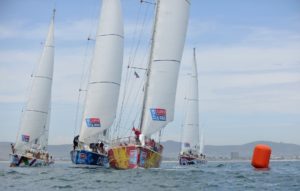 Close racing in Table Bay after the start.
pic by Bruce Sutherland 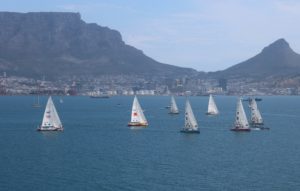 Table Bay is always a unique place to start a yacht race.

Clipper Round the World Race yachts had departed Cape Town earlier on the day on leg 3 of the race.

NSRI Kommetjie dispatched the sea rescue craft Spirit of the Vines (Rescue 26) and a sea rescue vehicle towing our mass casualty trailer to the scene.

NSRI Hout Bay was activated and their sea rescue craft Nadine Gordimer (Rescue 8) and Albie Matthews (Rescue 8A) was launched.

NSRI Simonstown were activated and their sea rescue craft Spirit of Safmarine III (Rescue 10) was launched.

The Clipper Round the World Race yacht CV21 reported to be in the vicinity and reported to be planning to attempt a rescue operation, but we ordered the yacht to stand-off, despite their good intentions, and to continue sailing.

On arrival on the scene we found the yacht hard aground on rocks and all casualty crew onboard were in life-jackets on the yacht and safe and in no imminent danger in an onshore 14 knot North Westerly wind and 1.5 metre swell in a rising Spring High tide.

MRCC, TNPA, Metro Control (WC Government Health EMS) and CoCT DRM were informed and no additional resources were required on the scene and all remained on alert.

We looked at the option to pull the yacht off the rocks but it was decided instead to put all casualty crew into their two life-rafts.

All casualty crew were assisted into their 2 life-rafts under the supervision of the NSRI Kommetjie rescue swimmer that was onboard the casualty yacht.

The life-rafts were left to drift ashore.

The operation was completed after 03h00.

Back to the start of the leg. First to cross the start line, ahead of a triangular course in Table Bay, was Capetonian Dale Smyth’s Dare To Lead team, closely followed by Visit Seattle, led by youngest ever Clipper Race Skipper Nikki Henderson, and HotelPlanner.com, Skippered by Conall Morrison from Derry-Londonderry.

Sanya Serenity Coast was first to the next mark with its kite up, followed by Greenings, Unicef and HotelPlanner.com.

This Southern Ocean stage of the Clipper Race is seen as the first major test of nerves and courage as the teams head into the notorious Roaring Forties, an area laying between 40 and 50 degrees latitude which is respected by sailors as one of the best places to fully appreciate Mother Nature in her most raw and powerful glory.

One participant, David Marige Moroko, 26, also known as Sello, is from Dennilton, 30 km away from Groblersdal in a village called Lenkwaneng. Incredibly he had never seen the sea before he started his Clipper Race training a couple of months ago in the UK.

Joining the Dare To Lead team for this leg, he said: “It’s already been an incredible journey. From someone who had no sailing experience at all until just recently, to this point today when I am about to sail to Australia, it has been non-stop learning. My team seem great and I’m excited about all the experiences we are going to have together and looking forward to the effect that it will all have on me, as a sailor and as a person too.”

Early tactical decisions will need to be made after leaving the fickle winds of Table Bay, and passing the Cape of Good Hope, as the twelve teams negotiate a potential wind hole when crossing the Agulhas Bank, an area notorious for very disturbed seas where the Indian and Atlantic Oceans meet.

Once reaching the strong easterlies, spinnakers are likely to appear and ocean racing tactics will be in full flow as the matched fleet of Clipper 70s will aim to reach downwind surfing speeds of more than 25 knots as they steam towards Australia.