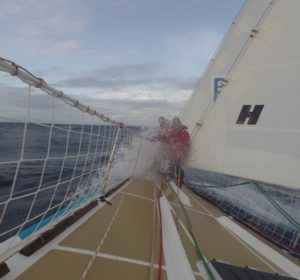 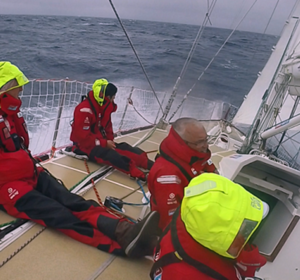 There have been leader board changes with shifting winds and variable conditions resulting in teams experiencing some of the most demanding on board conditions of the race so far.

Unicef, which had enjoyed four consecutive days in the lead, has now slipped behind Sanya Serenity Coast and Visit Seattle which now take first and second place respectively.

Nikki Henderson, Skipper of Visit Seattle: “It’s been our toughest 24 hours yet.

“The crew worked their socks off yesterday in very shifty winds. We’ve been tacking a lot to keep making ground south and west.

“We have done three headsail changes, having begun yesterday with the Yankee 1 up, then we saw 30 knots and pouring rain so went down to the Yankee 3. Wind gradually decreased over the cour se of the day – so the Yankee 2 made an appearance and now we are back up to the Yankee 1.”

For the teams that decided to stick to the easterly route, the front is still moving through which will be associated with deep cumulonimbus cloud formation, which bring strong but short-lived gusts of wind, which Liverpool 2018 Skipper Lance Shepherd described as “squalls, dunkings and fruity conditions overnight.”

Whilst the conditions are keeping Skippers and crew busy, they are also proving to be pretty enjoyable.

Garmin Skipper Gaetan Thomas says: “Every day the level is rising and we had another busy 24 hours. During the day, the wind was picking up speed and waves were falling on deck. The water is warm so each bucket of water on our face created a lot of smiles on deck and was often followed by a big apology from the helm.”

For teams that took the westerly route, tactics are starting to pay off with Liverpool 2018 now sitting in seventh position and HotelPlanner.com in eighth.

Commenting on the past 24 hours, HotelPlanner.com Skipper Conall Morrison reports: “We have sailed from the centre of a high to the centre of a low in about 36 hours, going through each gear change, taking each of the three Yankee sails up and down, and each of the reefs in and out as the wind increased and decreased on our chase west – it’s great fun!

“After the passage of the low, when boats get into the NW airflow, we will see how positions have changed and who comes out best.”

Andy Burns, Skipper of GREAT Britain, currently in ninth place, said: “We are continuing to work our way west towards those westerly’s which we hope will take us rapidly south.

“Given the unpredictability of the winds, though, we will not know for certain if this will work for a few days. The game of Ocean Racin g is certainly a complex one.”

The tactical game also took a new turn yesterday when PSP Logistics became the first team to activate ‘Stealth Mode’, a 24-hour period during which a team can choose to become ‘invisible’ to its competitors and Race Viewers.

Mark Light, Clipper Race Director, commented on the decision: “Stealth Mode can be used to hide an important tactical decision from the rest of the fleet and with changeable weather conditions, it will be interesting to see what Roy Taylor and the crew of PSP Logistics decide to do in this 24-hour stretch.”

For the cluster that chose to take the westerly course, making the bold decision to add extra miles to their route, the gamble is beginning to pay off, as they enjoy favourable wind conditions and begin to advance on the leaders.

Andy said: “Things are hotting up on the GREAT Britain boat as we try harder and harder to chase the pack at the front of the fleet. Hopefully our tactics of staying further offshore will start paying off soon.”

However, for those who chose the more direct route to the east, initial success has now been stalled as they suffer through another painful day of low winds in the centre of a wind hole, all the time watching their leads disappear. Wendy Tuck, Skipper of Sanya Serenity Coast, which is currently clinging on to first place, comments: “It’s always a bit tough to see your lead chipped away, or should I say smashed to smithereens!

“We are now just waiting for the morning heartbreak, otherwise known as the position report. I did have it all planned out how to go around the weather system, but we just lost speed a tad too early and never got a chance to use my cunning plan.”

This was a thought echoed by Skipper Dale Smyth on fourth placed Dare To Lead.

“Well a tough day yesterday as we watched all our hard work slip away as we sat in a windless hole.”

Maintaining a positive outlook, despite slipping further down the rankings, is Bob Beggs, Skipper of Unicef. Unicef is now in fifth place behind Visit Seattle (second ), Garmin (third), and Dare To Lead, but Bob said: “The focus onboard is good, and with just over 5,000 nautical miles to push, the race is just getting warmed up.”

The weather ahead looks promising, with some stable conditions on offer for those to the west and some wind on the way for those stuck in the wind hole yesterday.

After Greenings Skipper, David Harsthorn, suffered a serious injury to his left hand which requires emergency medical attention, the Greenings team has stopped racing and is diverting to Porto, Portugal.