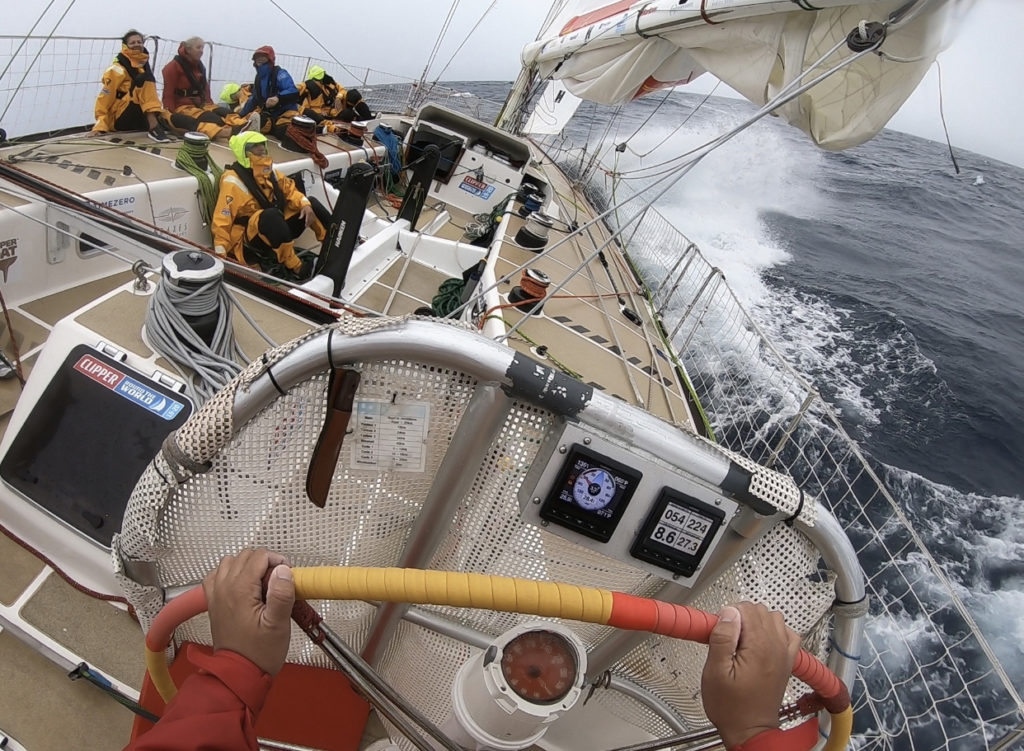 Our two local RSA skippers did not have the best of legs with Nick Leggatt bring in ‘Zhuhai’ in 6th, and David Immelman bring ‘GoToBermuda’ in 10th. So no doubt these two will be scheming ways to bring their trusty steeds in to Cape Town at the top of the fleet. Let’s hope so.

The race has been a tough one, with vastly contrasting conditions creating an experience the crews will remember forever. With around 40 percent of crew having never sailed before completing the Clipper Race training programme, their newly acquired skills were put to the test in strong winds left in the wake of fierce tropical storms. In contrast, the teams have enjoyed idyllic sailing conditions, spotted the wildlife they will have dreamt of and crossed the Equator in their own unique way.

Despite his lowly finish, ‘GoToBermuda’ enjoyed some close racing and Skipper David ‘Wavy’ Immelman was upbeat with the progress of his crew: “It’s so great to see the crew develop and become better, not just in sailing ability, but in confidence and personal growth.” 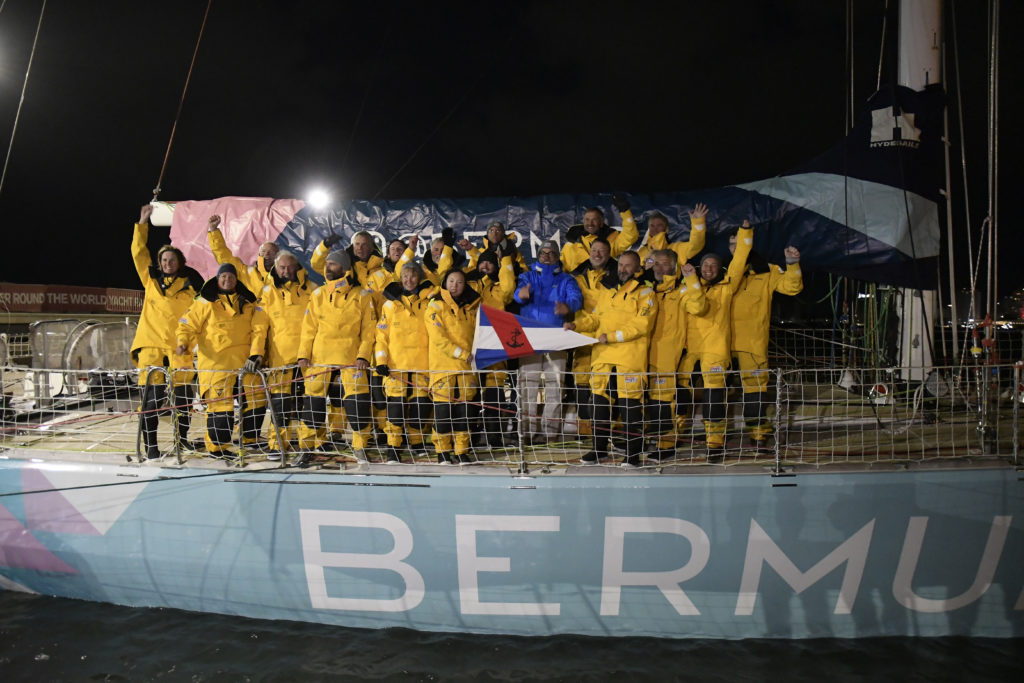 The day before finishing, David Immelman penned this report:
One hell of a day and night. The wind was a lovely south-easterly, however it turned east and we started to see the first of the squalls appearing on the horizon. By 15h00 boat time, we had been hit by our first. Driving rain, 40 knots plus wind speed and wind direction all over the place, followed by the post calm. Two or three more during daylight, then the disaster. We had managed to get the Code 2 Spinnaker down and packed earlier and it was then brought back up for the hoist after the squall died down. So, down it died and as we started to get ready for the hoist, a swell hit us and over we went, full guard rail in the water and boat at 80 odd degrees over. Of course the spinnaker came straight out of its bag with the water rushing down the deck and into the ocean. That in itself would not have been a problem, but all the lines were attached for the hoist, so it tried to sail under the water… rip… tear… holes… horrible. We have been looking after our sails very carefully and to get a tear while it was not even up, very disappointing. After much struggling we got it back on board and just in time.

As the sun was setting we saw two squalls ahead and one coming down on us. We got caught right in the middle and all hell broke loose. The next squall hit… The biggest of the three we were trying to avoid, but now could not as we were dragging a spinnaker underwater. A very quick reef and we managed to get the main into second reef, a drop of the Yankee 1 and we could ride out the worst. Lightning everywhere, wind up to 65 knots over the deck, driving rain, followed by hail, now that hurts at 60 knots. The crew were cowering in the cockpit, like the clever folk they are, but Heather and myself were driving and on main sheet. The hail was hitting my face from the beam on the left hand side. Each tiny and not so tiny bit of ice hurt like hell. What was worse is that I was called on deck in a hurry when the spinnaker went over so I was not dressed for the occasion. Shorts and a spray jacket. Legs pummelled, my hands on the wheel felt over exposed and after the hail, the rain ran right through everything I was wearing. And still the squall persisted… An hour later, very long for a squall (you never mentioned that Simon) we emerged, none the worse for wear, and with a relieved, if not a little, wide eyed crew. So, for the rest of the night I have gone for the “safe” option of keeping the reefs in and Staysail. There is still a sky full of lightning, and some very dark areas that look, well nasty, as well as I am expecting a dramatic shift in the wind. 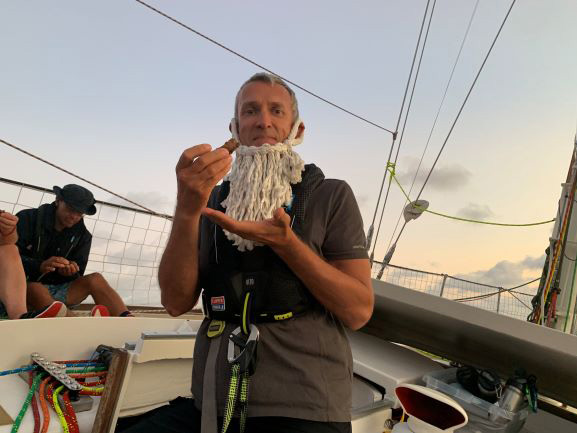 So, what about the race you might think? Good question, but my crews safety come first and foremost and with the weather like it is, I am not willing to put anyone on the mast trying to pull a reef in, at night, in another 60 knot wind. Let’s see what the morning holds, and we can make ‘GoToBermuda’ start to race hard again. And keep Mike and his team behind us.

So, with daylight two hours away we are making the most of a rest, but still moving at 10 knots, before back to full on. So, from me and my tired but exhilarated crew, cheers and chat later.

From that report one can quite easily how tough the role of skipper on these boats, with inexperienced crew, really is, as Gerry Glover, a ‘GoToBermuda’ crew member, wrote this:
I am currently sitting in the saloon and its 23h00. I am feeling totally exhausted, but have to be back on deck in one hour. I cannot believe the last 36 hours and what the weather has thrown at us. Multiple spinnaker changes, which means packing them away, a 30 minute job at best. Squalls which have us sideways in the water, lightning in the sky all around us that has gone on for two hours and driving rain and hail, disrupted sleeping routine due to the extra workload not to mention winds topping 65 knots per hour! This has been life on board for us, but we are so tantalisingly close to the finish line and everyone is secretly hoping that we get in in the next 24 hours.

Once we get in then we’re faced with big decisions – beer then shower or shower then beer? I do think the beer will be a stronger pull for us! Then a long-awaited shower.

This has been a mammoth leg for us, especially the novice sailors on board. The weeks out training had been the longest most of us had spent on a boat until this race. What will I feel at the end of this race … well, Caroline and I have had this conversation just yesterday. And yes Greg and Fergus agreed that we might shed a tear or two once we cross that finish line. Pride and a huge sense of achievement will be at the top of my list that’s for sure.

I am not yet thinking about Leg 2 and what that might have in store for us. I need to get through tonight first, as I can hear from the deck that we have more squalls ahead. So it’s looking like an early watch start, better get my wet weather gear on and head up to make sure we will get through this one ok, and watch the continuing light show while I’m up there. 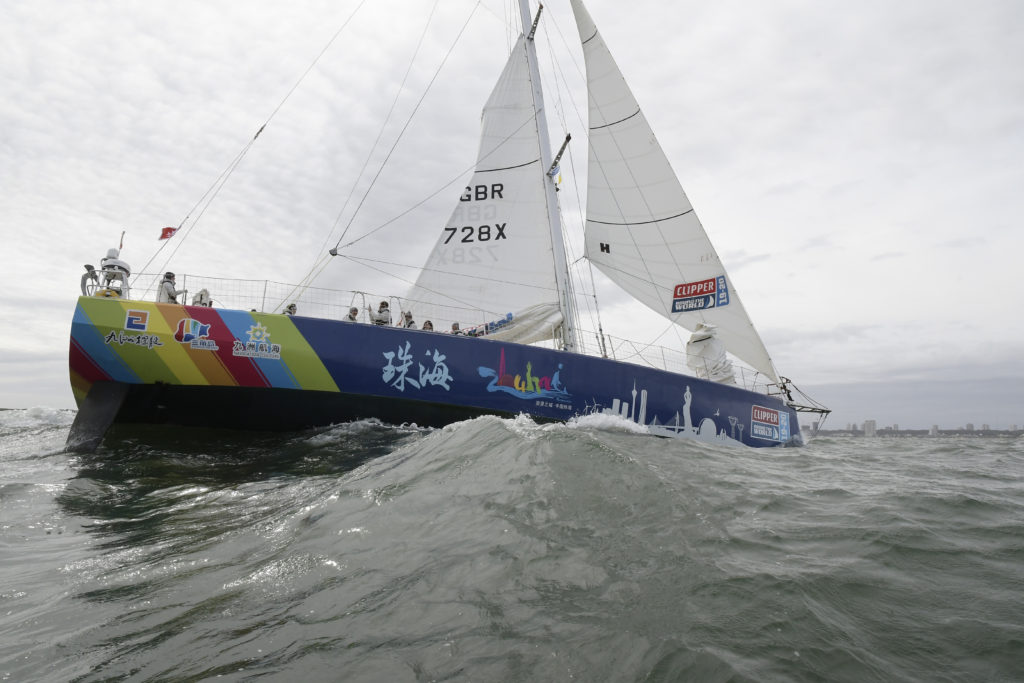 Highly experienced racing skipper Nick Leggatt has had experience of the weather described above many times over, so his take on things is extremely interesting as one can read below:
Less than 250 nautical miles to go and conversation automatically turns to talk of our ETA in Punta del Este. Thankfully the ‘Zhuhai’ team has remained quite focussed on the racing and not been too obsessed with thoughts of arrival times. This is probably because I had already given them my standard lecture about the fact that they can have any combination of the letters E, T and A while we are racing, except ETA. They can discuss whether they would prefer coffee or TEA, what they just ATE, or even what they would like to EAT, but the ETA is what it is. We will get there when we cross the finish line. Up until then, we are in full race mode.

And full race mode has meant some pretty hard work these past 24 hours, since our exciting broach and spinnaker change this time yesterday.

We spent the remainder of last night surfing under full Main and Yankee 1, and then soon after first light, the wind began to ease off and we swapped the yankee for the Code 2 Spinnaker again, exactly as the weather forecast had led us to expect. With a good breeze blowing, we were treated to a spectacle of albatross aerobatics that never ceases to impress anybody.

At lunch time “Happy Hour”, we were discussing strategy for the final few miles when a very unusual cloud appeared on the southern horizon. Luckily, I have had past experience of the roll clouds that usually precede what can be severe gale force “Pampero” winds that blow across the South American Pampas. So, I knew we were in for an unusual change in the weather. None of the forecasts have been predicting a gale, but a fast moving roll cloud could only mean that at the very least we could expect a major change in the weather in a very short time. And sure enough, as the cloud passed over, there was a strong gust and a wind shift of almost 180 degrees.

The Code 2 was quickly changed for Staysail and Yankee 1, and then we began a series of tacks as the wind shifted all over the place for several hours, before dying to a faint north-easterly breeze, necessitating a change to the Windseeker for a while and then back to the yankee as it veered to the east. Who knows which way it will go next? But the crew are up for the challenge of changing sails or trimming day and night to keep Zhuhai moving to the finish line.

During the darkness of the night we were also treated to a display of a huge pod of dolphins playing around the boat while we were changing sails. A very welcome distraction. 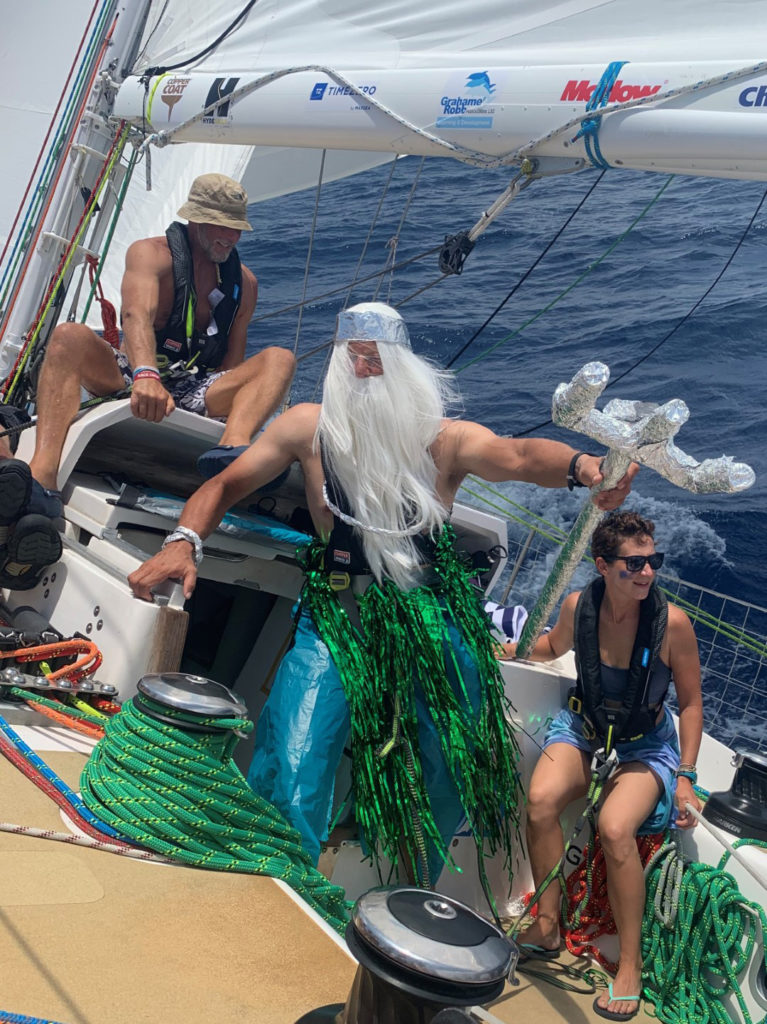 ‘Zhuhai’ crew Ina Baum shares her emotions and her new happy place:
Another busy day with lots of activities and spinnakers changes, three before elevenses. Us ‘Zhuhai’ girls Soph, Harry and I have a really great system going for wooling and packing our spinnakers, and were quick and efficient – total code ninjas! Not so long ago we used to check what we were doing and even ask the boat hunks to help with the heavy lifting, now we do this without batting an eyelid! So I find myself in the sail locker, knee-deep in sail material and sweat, we are working hand in hand, listening to our favourite playlist, singing along, joking and giggling, it came over me, this tremendous happiness boost as I am a newly found happy place and at the same time I had tears in my eyes realising that the two people I work so seamlessly with are leaving us in Punta del Este, even though neither of them want to. I mumble: I will miss you so much, and start crying. We huddle, hug and cry together and I realise I made two new friends. And you know what? I will miss them dearly and so look forward to seeing them again, as both will come back for another leg. These unexpected but treasured moments are what make this already the race of our lives! Lucky me.

As the fleet were all safely in port, the prize giving celebrations took place, but before the formal prize giving got underway, 48 Race Crew who will be leaving the race after completing the first of eight legs, were called to the stage to celebrate their remarkable achievements.

This leg saw 220 Clipper Race crew, who come from all corners of the globe and walks of life, push themselves to their physical and mental limits through fierce storms and extreme heat whilst racing each other to South America. Lifetime memories for all aboard the Clipper fleet. 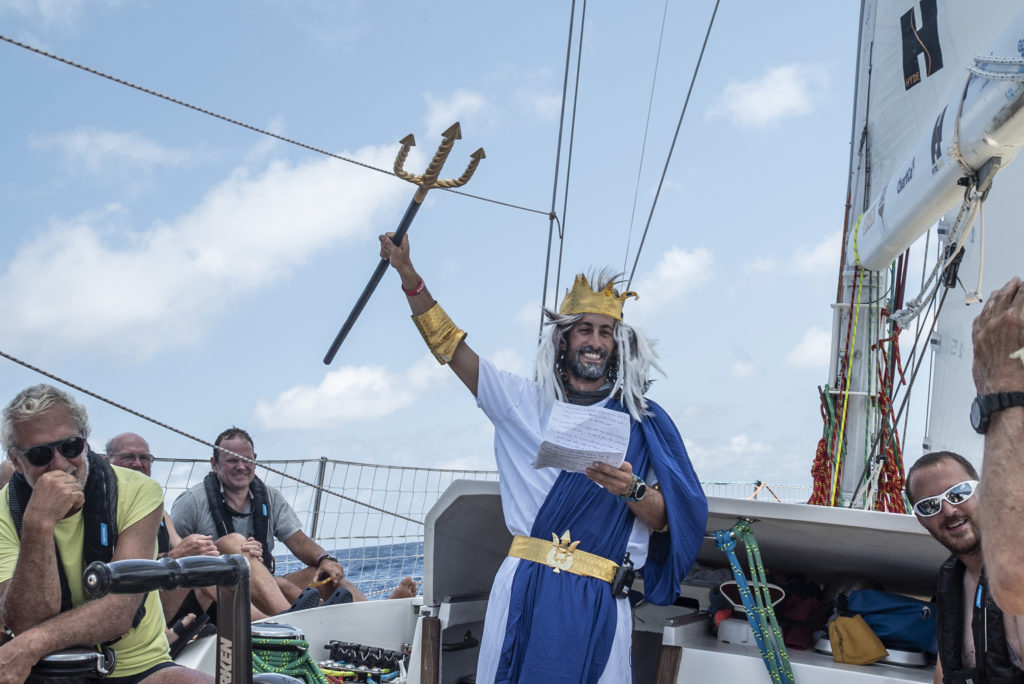