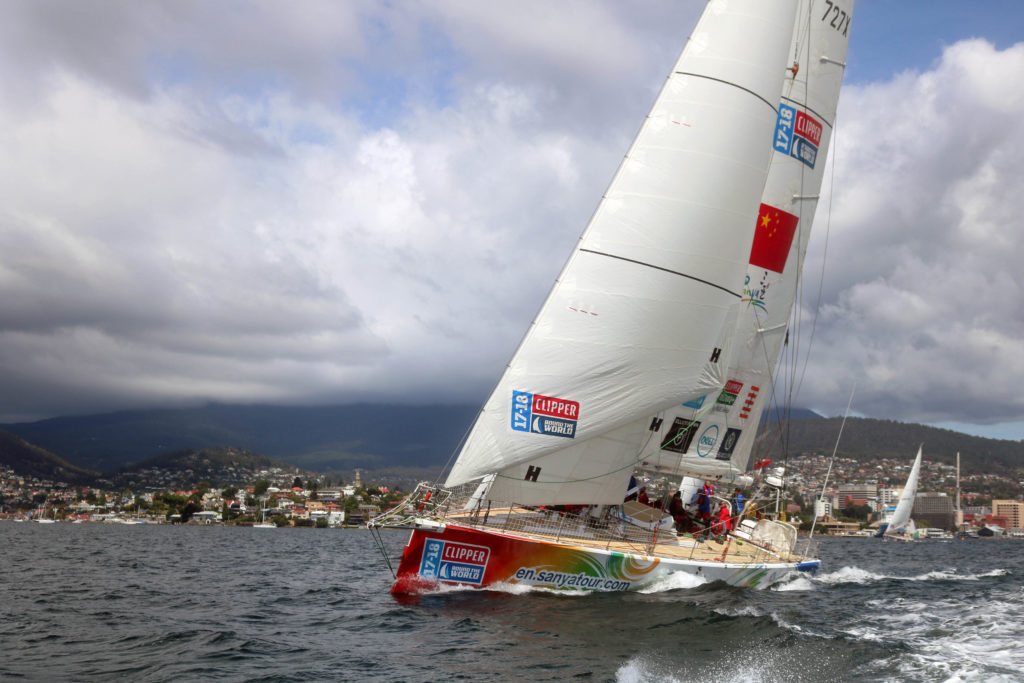 The final stage of the All-Australian Leg in the Clipper 2017-18 Race, officially known as Race 6: The Wondrous Whitsundays Race, is now underway from Hobart, Tasmania to Airlie Beach, in the Whitsundays.

Overall race leaders Sanya Serenity Coast, Skippered by Australian Wendy Tuck, was the first across the line, followed closely by Visit Seattle and Dare To Lead, continued to lead the fleet up the River Derwent.

The fleet is expected to face a predominantly upwind race with crews needing to negotiate the dominating Eastern Australian Current (EAC). Speeds in the core of the EAC, an oceanic current which moves warm water from the tropical Coral Sea, are some of the strongest in the South Pacific and each team will need to agree on the best race tactic; staying closer to the current, where speeds are stronger, or heading further offshore where the effects of the current are weaker, but will add extra miles to the sprint.

Teams will also need to think tactically about both the Scoring Gate and Elliot Brown Ocean Sprint. These virtual gates offer the chance to pick up bonus race points, but could make the race route longer and teams could risk losing valuable leaderboard places.

The addition of headwinds from prevailing Easterlies could make the race a bit of a slog for Skippers and their crews. Luckily for the Clipper Race fleet, the stunning surroundings of the Whitsundays will be the reward.

Garmin Skipper Gaëtan Thomas has sailed much of the Whitsundays solo and also completed his RYA Yachtmaster Offshore qualification in the area. Speaking on his tactics ahead of the race as he aims to challenge Wendy and the other nine teams, he says: “We played our Joker Card (single use card which doubles a team’s points for one chosen race stage) because it’s a short race, we’ve got the same team as the previous two races so we are working well together and because I also have some local knowledge in the Whitsundays. We felt it was the right time.”

Sanya Serenity Coast heads up the Overall Race Leaderboard even though it has not yet played its Joker Card and the team’s Australian Skipper Wendy Tuck is looking forward to the final stage of the All-Australian Leg, where she hopes to extend her lead. She says: “I’ve done a lot of sailing up and down this coast so I’ve done a fair few miles but, at the end of the day, it’s the current that we’ll all be looking at on the charts and getting the information on that, so who knows if it will make a difference.

“Fortunately, the team is really good at upwind sailing. The boat sails really well upwind, too. We look forward to upwind conditions because we normally do well. Even though its cold, wet and uncomfortable, we normally do well in it.”

Race 6 follows a thrilling Sydney to Hobart campaign with all eleven teams crossing the line at Constitution Dock within 90 minutes of each other, proving how well matched the competition is in this race edition.

Teams are expected to arrive into Airlie Beach, the Whitsundays, between 13-15 January 2018, where the fleet will be berthed at Abell Point Marina and the region is expected to come alive for the inaugural Whitsundays Clipper Race Carnival.