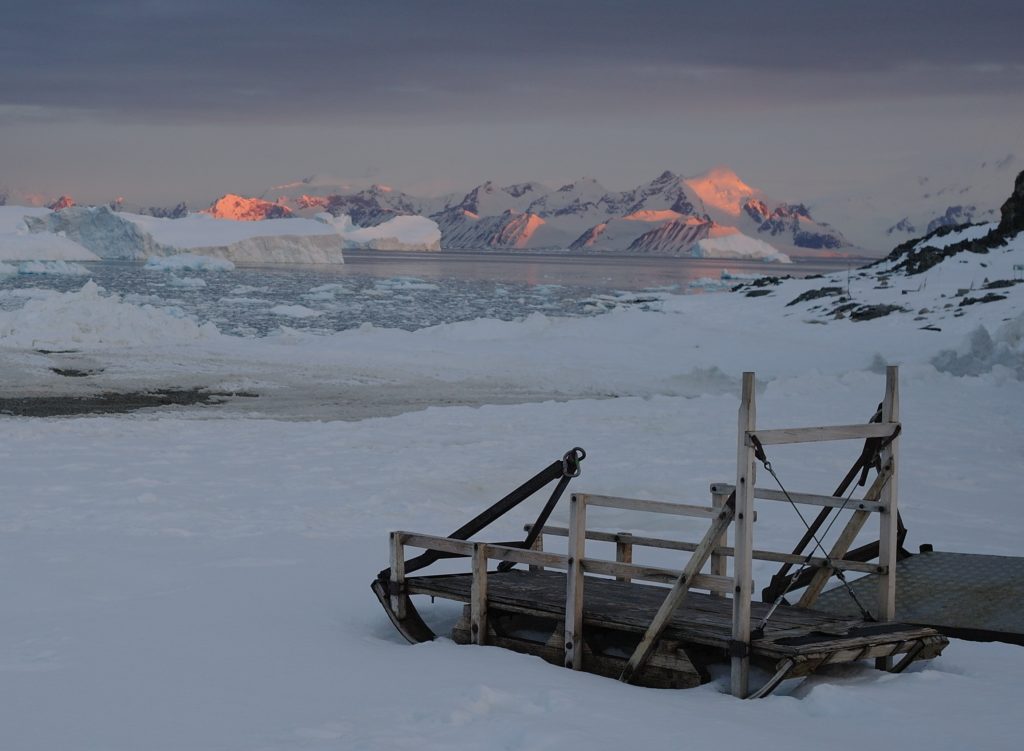 The late summer sun sets over mountains and icebergs around Adelaide Island, Antarctic Peninsula, as 24-hour daylight gives way to the long polar night of winter.
pic by BAS/Hamish Pritchard

Ice losses from Antarctica have tripled since 2012, increasing global sea levels by 3 millimetres in that time frame alone, according to a major new international climate assessment funded by NASA and ESA (European Space Agency).

According to the study, ice losses from Antarctica are causing sea levels to rise faster today than at any time in the past 25 years. Results of the Ice Sheet Mass Balance Inter-comparison Exercise (IMBIE) were published Wednesday in the journal Nature.

“This is the most robust study of the ice mass balance of Antarctica to date,” said assessment team co-lead Erik Ivins at NASA’s Jet Propulsion Laboratory (JPL). “It covers a longer period than our 2012 IMBIE study, has a larger pool of participants, and incorporates refinements in our observing capability and an improved ability to assess uncertainties.”

This latest IMBIE is the most complete assessment of Antarctic ice mass changes to date, combining 24 satellite surveys of Antarctica and involving 80 scientists from 42 international organizations. 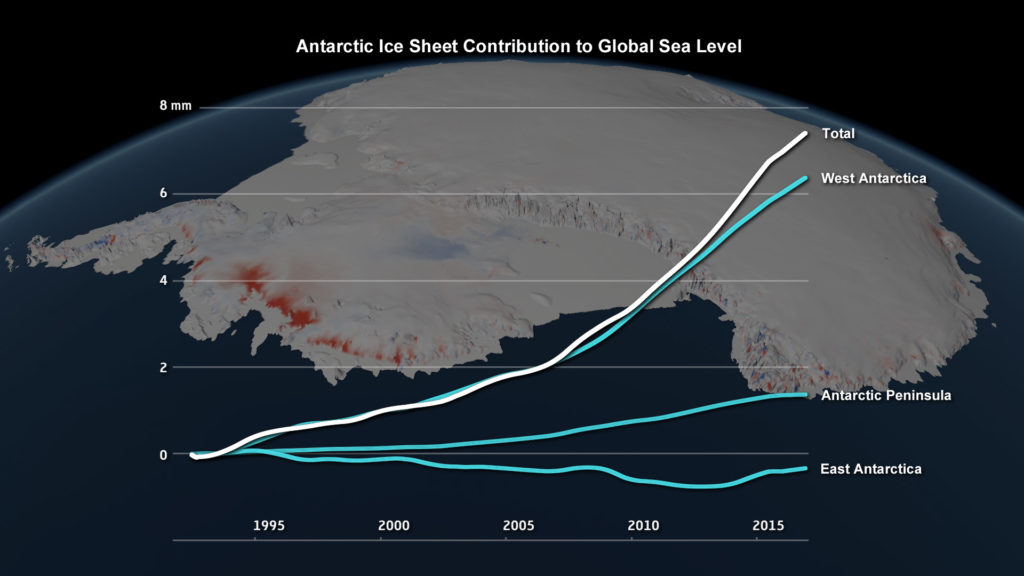 Changes in the Antarctic ice sheet’s contribution to global sea level, 1992 to 2017.
pic by IMBIE/Planetary Visions

West Antarctica experienced the greatest recent change, with ice loss rising from 53 billion metric tons per year in the 1990s, to 159 billion metric tons a year since 2012. Most of this loss came from the huge Pine Island and Thwaites Glaciers, which are retreating rapidly due to ocean-induced melting.

At the northern tip of the continent, ice-shelf collapse at the Antarctic Peninsula has driven an increase of 25 billion metric tons in ice loss per year since the early 2000s. Meanwhile, the team found the East Antarctic ice sheet has remained relatively balanced during the past 25 years, gaining an average of 5 billion metric tons of ice per year. 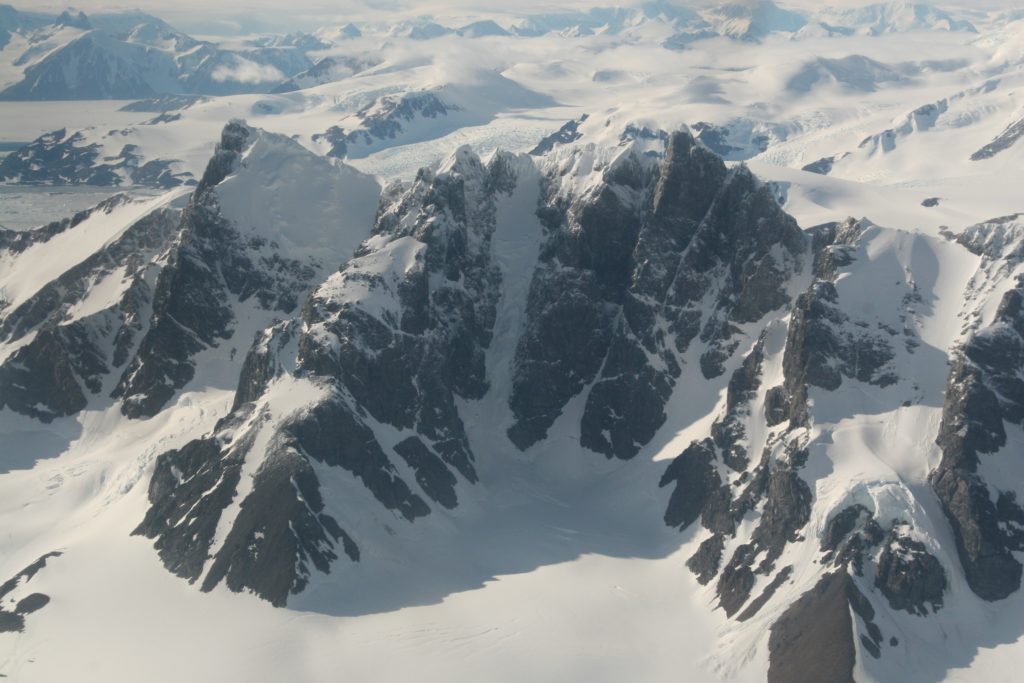 The Antarctic Peninsula from the air: although the mountains are plastered in snow and ice, measurements tell us that this region is losing ice at an increasing rate.
pic by University of Durham/Pippa Whitehouse

Antarctica’s potential contribution to global sea level rise from its land-held ice is almost 7.5 times greater than all other sources of land-held ice in the world combined. The continent stores enough frozen water to raise global sea levels by 190 feet (58 metres), if it were to melt entirely. Knowing how much ice it’s losing is key to understanding the impacts of climate change now and its pace in the future.

“The datasets from IMBIE are extremely valuable for the ice sheet modelling community,” said study co-author Sophie Nowicki of NASA’s Goddard Space Flight Centre. “They allow us to test whether our models can reproduce present-day change and give us more confidence in our projections of future ice loss.”

“Data from these missions will help scientists connect the environmental drivers of change with the mechanisms of ice loss to improve our projections of sea level rise in the coming decades,” Wagner said. 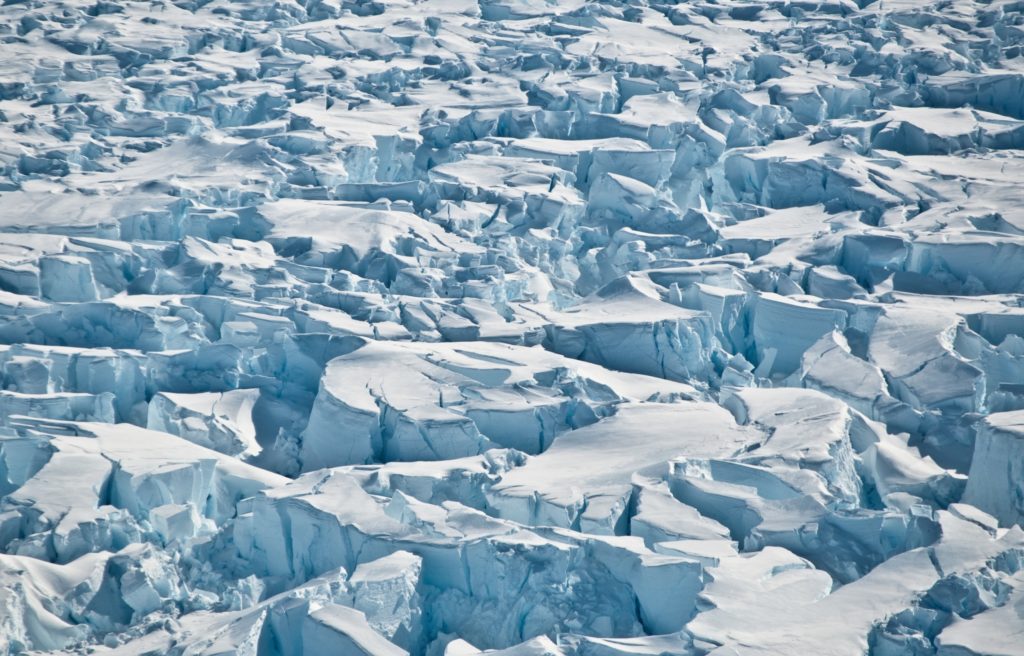 Crevasses near the grounding line of Pine Island Glacier, Antarctica.
pic by University of Washington/I. Joughin