Conditions were tough out on Table Bay for racing on day 2.
pic by Ashleigh de Villiers

Day two was a rather subdued day compared to day one as the winds were lighter bringing a more tactical element to duels on the water. Yet that did not deter the top boats who fought it out fiercely and in close quarters for much of the time. 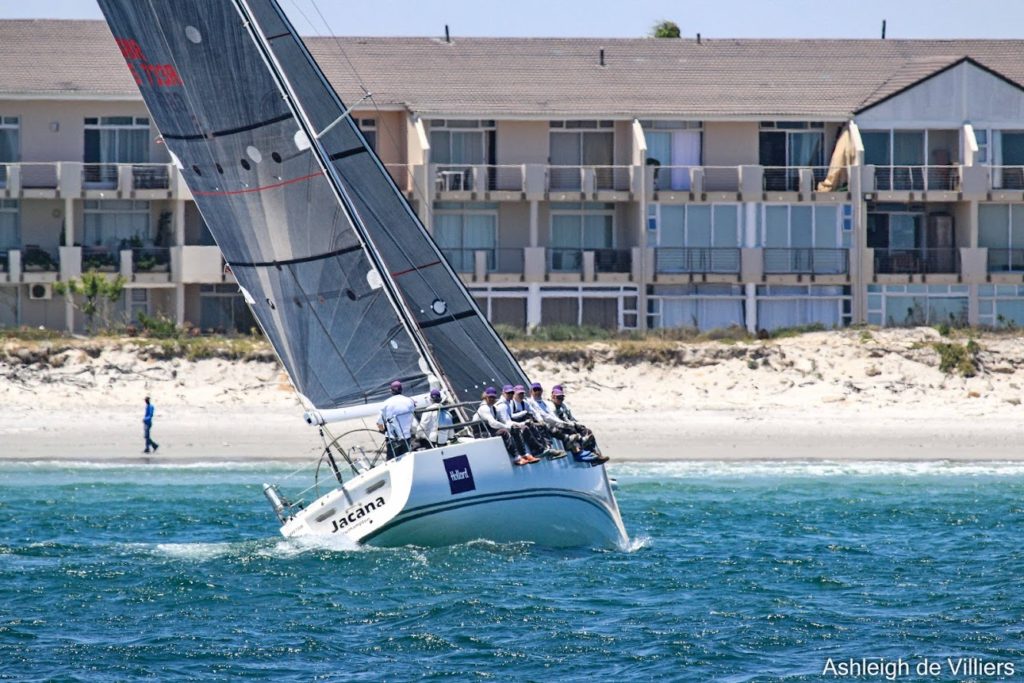 Hollard Jacana going in as close to the beach as possible.
pic by Ashleigh de Villiers

Class A Report by Neil Gregory aboard Hollard Jacanca
The Class A boats headed out with no wind in parts of the bay and a brisk SE along the beach. The Simonsberg mountain was covered in cloud which generally indicates huge pressure arriving.

The 10h00 start unfortunately did not work as the fleet eventually started at 11h00 in a SE with lots of light patches across the bay.

The start was dominated by Cape Fling and Windpower who were on the pin and challenging each other right to the gun. There was a loud bang as the two yachts made contact. Both yachts carried through their penalties.

After the start, the key was to remain in the pressure or lose out.

It began to look as though the promised SE was going to materialise as on Hollard Jacana we were seeing wind speeds of 22 knots. Unfortunately this wind did not last and the Westerly started to push through again.

Race 1 certainly had its challenges as the Bridge boat was anchored in a no wind zone. The leg down towards Blouberg was all about who could get closest to the breakers where the South Easterly was still blowing. The wind remained light and constant all the way back to Harken, then downwind for a short distance until the wind dropped completely until swinging to a NW.

It was a hot and exceptionally interesting day on the water, sailing in Southerly and South-Westerly winds with periods of zero wind. 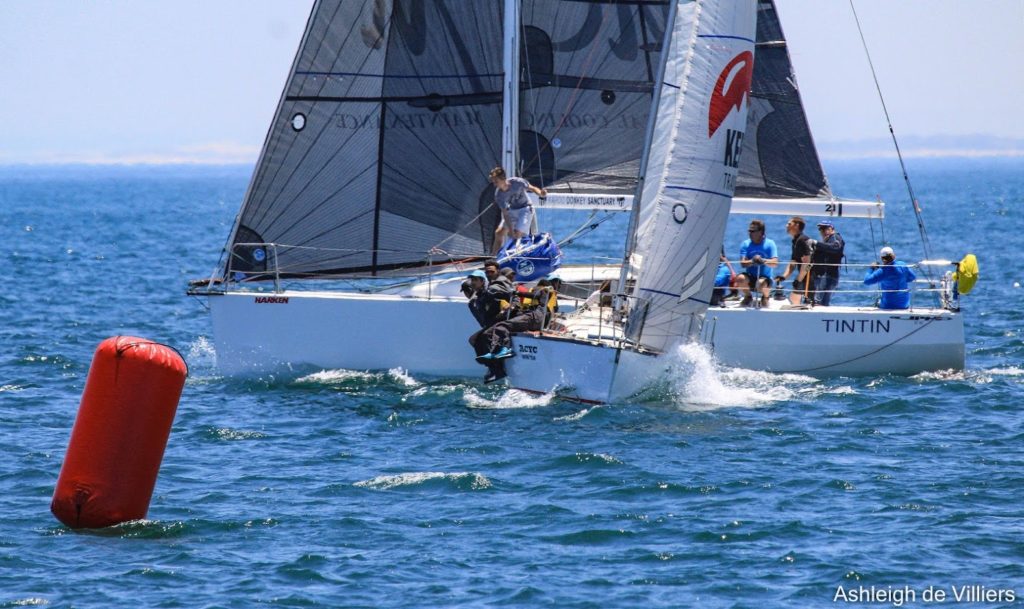 Tin Tin had a tough day on Day 2 as they simply could not replicate their winning ways from day 1.
pic by Ashleigh de Villiers

Class B Report from Tin Tin
With three bullets behind our name on day 1 of the CTRW, and despite us trying to contain the complacency, day 2 proved to be a challenge of note – and we have had better days to comment on the race in public!

The same tricky conditions were there for all, and well done for the race committee for their bravery of sticking to a solid game plan.

The lighter SE conditions in the morning made for trying conditions to get the start sequence going. The Coastal group went off well and appeared to have found a gap of stable breeze to tack up the shore before heading to Robben Island.

After a short intermission by the Race Officer, and fluctuating conditions, the Easterly was fighting the South Easterly with a small band of SE looking promising to start the fleets off with.

The AP (postponement flag) had clearly created some excitement as the class A start saw some fierce fighting at the pin end between Cape Fling and Windpower, resulting in Cape Fling being over the line, and Windpower shooting low and missing the pin, so both yachts had to return to re-take the line.

Similarly the Cape 31 start was a boost of enthusiasm with only one boat out of the impressive fleet being behind the line at the gun. The second run was much cleaner with the X-flag calling only two C31’s back, but in a tight fleet like this, it was costly.

Fleet B had solid stable SE for the start with pin end being the solid favourite end due to lack of breeze at the start end. The left side of the course looked good and delivered. The excitement got to us as well and we had to double tack at the pin end to stay inside, causing a foul. Damage was averted due to good seamanship on the racy RCYC Academy L-26.

The first beat saw the SE staying strong all the way up to weather mark, giving hope for a straight downwind leg, which was not to be. The Easterly pulled its force and turned the downwind into a fetch under jib, although many different variations of hoisted sails where observed on this short leg. This was an announcement of what the weather had in stock for later.

By now it became clear that the left side was favourable as this was where the SE was still around. Even on the second downwind leg unusual lines paid off, by sailing away from the bottom mark and to the small band of wind that was narrowing by the minute. Monkey’s in the Mist made the best of it in Class B and had pulled away fro the rest in her fleet “to binocular distance’! Learning from what was ahead the two RCYC Academy boats and Far-Med, made sense of it all, and sailing 90 degrees away from the bottom turn mark put them in a winning position that they would eventually not give up.

A quick swoosh SE took the fleet through the S-bend of Milnerton, Woodbridge to Harken, and then all were faced with yet another transition zone between the two forces.

The SE held better in the offshore segment, yet again needing yachts to sail away from the mark to gain an advantage and tack into to the new breeze after the transition to make the finish.

There are worst things to do on a Sunday than spending time on yachts on a blue ocean with full sun as the 120 degrees wind shifts and 4 to 25 knots variance in wind strength challenged the state of mind.

For us on Tin Tin day 2 was a humbling experience. We look forward to going back to bullet mode for the last day of racing.