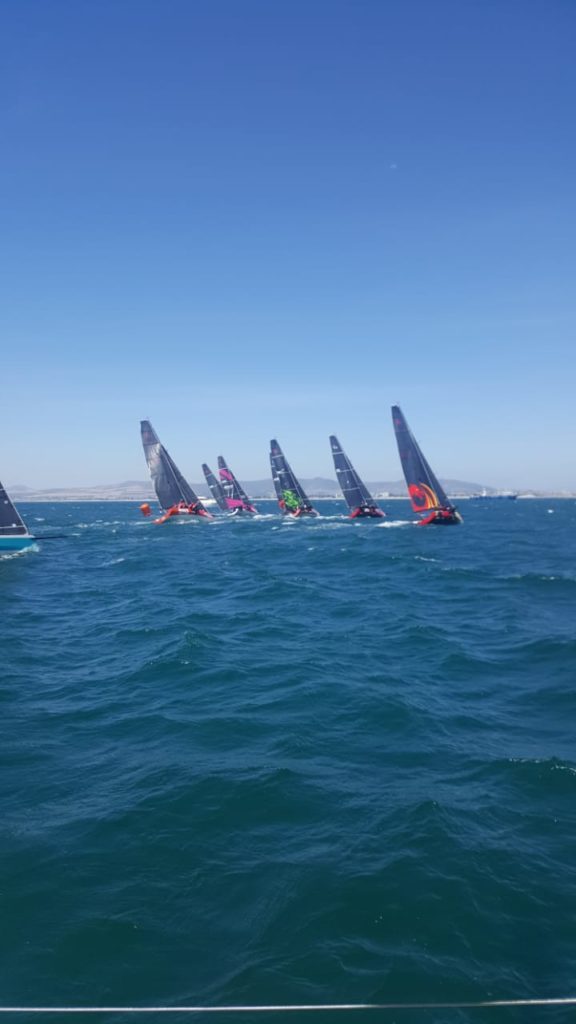 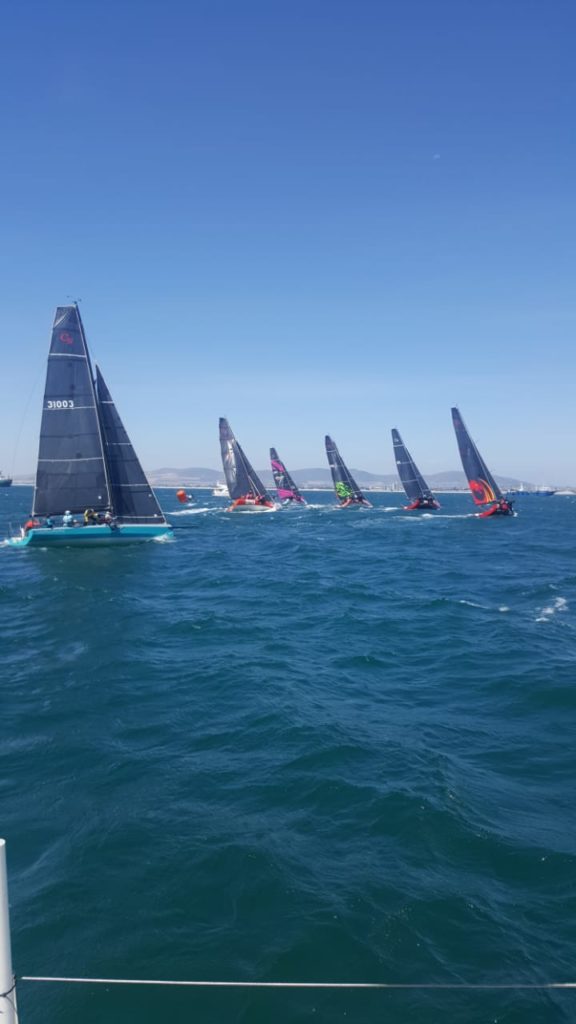 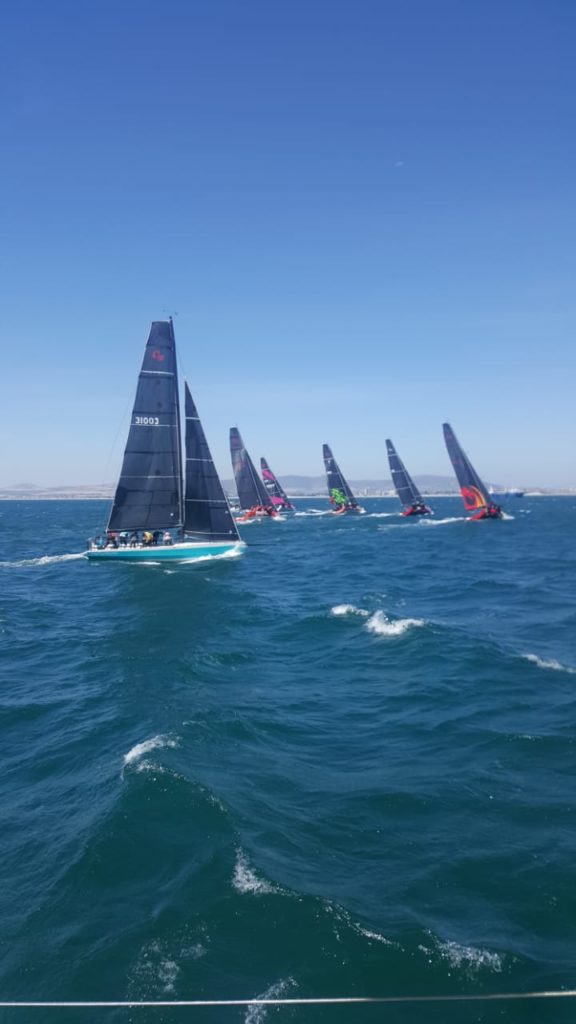 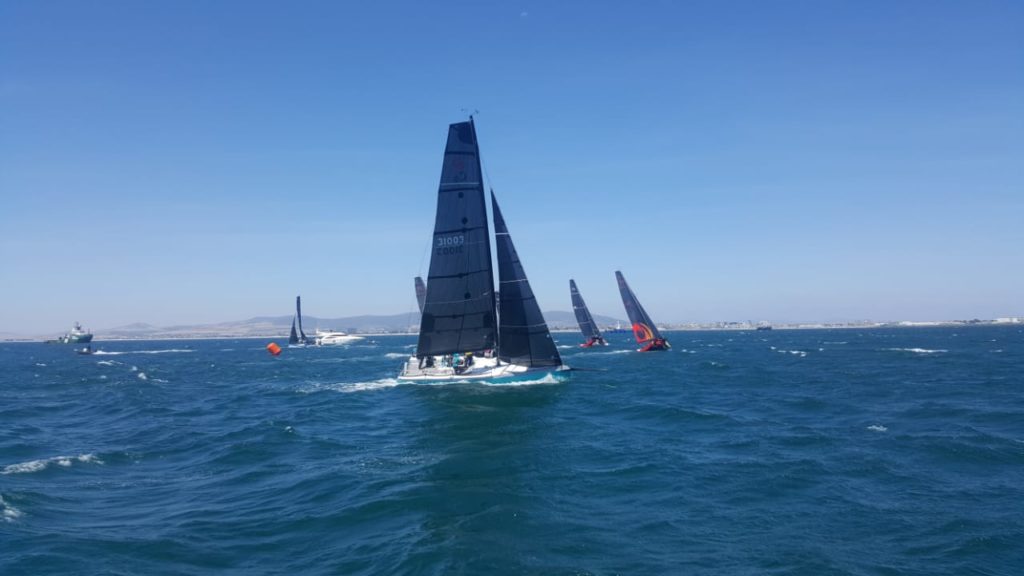 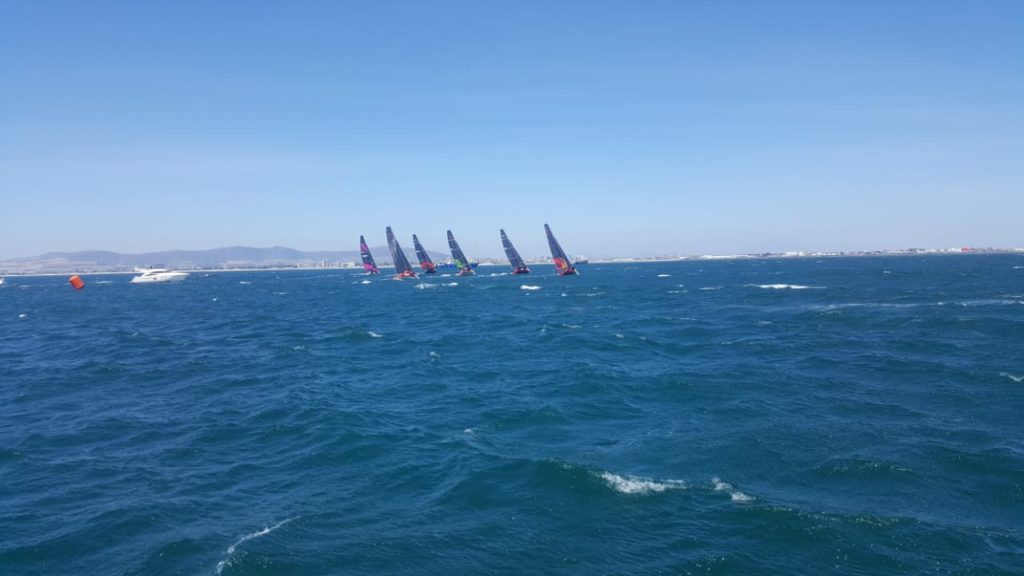 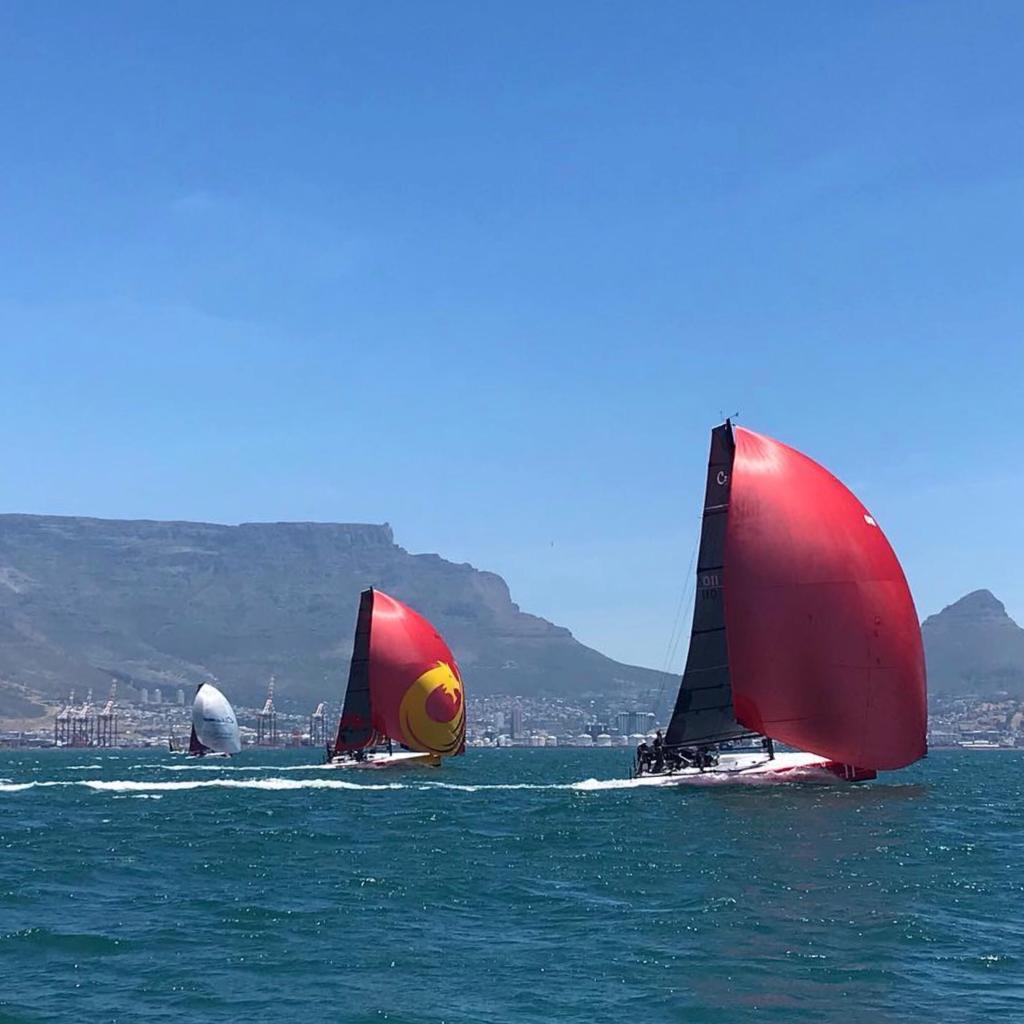 Cape 31s in action during day 1 of the Cape Town Race Week.
pic from Eric Bjerring on the Nitro chase boat

After a 90 minute wait, the south-easterly eventually won its battle over the westerly, and the breeze filled in from a more easterly angle than earlier, and was in the mid 20s with a beautiful flat sea. This last race of the day was going to be a treat!

The same course as the first two races was used.

The boats lined up closely at the start, with one boat which (looked like Nemesis) returning to restart. The boats tacked off from starboard one by one, as soon as they were clear, and came towards the mountain, before tacking back to the heavily favoured starboard lay-line. In those conditions, it was incredibly easy to overstand the lay-line as the wind bends around the mountain and one has a dramatic lift all the way to the south east corner of Table Bay. Some boats did overstand and foot off for the last couple of hundred metres into the weather-mark.

At the weather-mark, it was Nitro, followed by MB, who pinch hard in the final metres to make the mark, with Magic hot on their heels, followed by the footing TnT, Scud, CuAl, Nemisis and Ski.

There was action aplenty on its way with strong downwind breeze.

TnT broach after the gybe, but recovered well. Scud look to have chosen their A3, with all others on the A2 – so there could be interesting times ahead for her! Nemisis spun out hard and looked to have lost a halyard as after some time they dropped the kite and looked as if they had retired from the race.

There was a heavily favoured port gybe at the gate, and all but one boat (Ski) took a port gate rounding.

At the bottom mark it was Magic followed by MB, Nitro, TnT, CuAl, Scud, then Ski. The A3 choice didn’t seem to pay off for Scud, and Nemisis were definitely no longer racing.

On the last lap most of the boats played under the starboard layline more aggressively and rode the starboard tack lift to its maximum, with a short tack to port under the weather mark.

It was very close at the front and the wind was up making this last leg appear as if it may be a showstopper!

Magic, Nitro, MB round close together and clear ahead of TnT, then further back there’s Scud, who overhauled CuAl on the beat, and then Ski.

The front three were close as Magic gybe-set and spun out letting Nitro blast through on port gybe. MB boldly held onto their starboard gybe much further than the others, and as they gybed on to port one wondered if the gamble would pay? TnT were on fire this leg and are were reeling in MB, Nitro and Magic who were all on port.
The gybes were tricky in this wind with a number of boats struggling.

Nitro and Magic need to gybe back onto starboard to finish letting MB ghost through ahead with a photo finish between TnT and Nitro, then Magic who had rounded the top mark in first place. A really dramatic last leg!!! MB will be thrilled.

Race 2. The same course as Race 1 was sailed – two lap windward/leeward into a 20 knot SE wind.

The wind seems to have settled around 20 knots from the SE and was much closer together up the beat. At the weather mark, it was MB, Nitro, Scud, Magic and TnT all together in a line on the short leg from the weather mark to the offset mark.

It was fast and furious stuff downwind. A slow hoist cost many boat-lengths, with TnT and Magic quickly overtaking Scud, and Nemisis having a difficult time with the hoist. Ski rounded the offset boat-lengths from the mark – is their a problem aboard?

The fleet split up the next beat with MB, Magic, TnT and CuAl going right; Nitro defending the middle; and Scud and Ski going left.

A call came in from the weather mark boat that the breeze had dropped and that a transition was developing.

The boats still lined up to round for an uncertain last leg!

At the weather mark, there were three distinct groups: ahead were Nitro, Magic, MB Racing, then in the middle there’s CuAl, Scud and TnT, and at the rear, it’s Ski and Nemisis.

The boats squeezed the last of the rapidly retreating south easter on starboard gybe downwind, before dropping kites and beating into the new westerly to the finish line.

Race 1
Race 1 was a two lap windward/leeward course with an offset at weather mark and leeward gate.

With the building southerly moving to south-easterly breeze freshening from 20 into the mid-20s, the fleet peeled right off the start and hard towards the mountain before tacking onto the starboard layline and rounding in this order:
Nitro followed by Magic; well clear of a close group of CuAl, then Scud and TNT; Nemesis and MB, and then Ski.

Nitro and Magic open a healthy lead downwind, with Scud broaching out, taking some time to recover and eventually retiring. TnT and CuAl rounded opposite ends of the gate simultaneously. MB showing very good downwind speed just behind. Nemesis struggled to hoist and lost loads of ground.

All boats except CuAl took the port rounding at the gate and banged the Mountain. CuAl lost loads of ground upwind by going left, to the extent that MB caught them up and at the weather mark it was TnT, MB and CuAl fighting for third well behind Nitro and Magic. MB twisted their kite on the port gybe layline which ended their charge up the fleet.