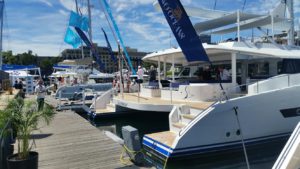 The CTIBS boasts the widest range of boats on the water, there’s a craft to suit every taste and pocket.

Now in its 17th year, the Cape Town International Boat Show will be building on a winning formula: keeping the event to one location at the V&A Waterfront Marina and increasing the on-land exhibitor space due to increased demand.

“Last year was one of the most successful events, reflected in the number of large vessels sold during the show,” said organiser Dana Whiting. “There’s no doubt that shows really work when it comes to selling, particularly with life-style items like boats. The prospect is able to walk on board, see, touch, smell and almost taste what it’s like to own a luxury yacht or catamaran.”

The Boat Show has been moved out by one week to accommodate exhibitors and buyers who may be attending the US Sailboat Show in Annapolis, and will take place from 20 – 22 October 2017. In addition to expanded water moorings the on-land component will be bigger, allowing for even more marine and boating-related exhibitors. 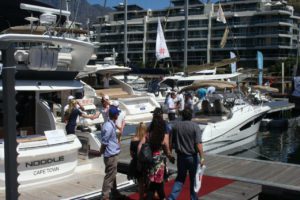 Visitor attendance at the show is high.

Also of interest is the fact that one of the world’s largest trade fair companies – Messe Frankfurt – have purchased the event from the current owners effective 2018. This is great news for the local boating industry as Messe Frankfurt is heavily committed to the sector – they already own and stage the Johannesburg Boat & Water Show as well as Automechanika Johannesburg. The latter is the premier automotive industry event in sub-Saharan Africa.

The Western Cape is home to a large number of small and medium-sized craft manufacturers. This includes Robertson and Caine – based in Woodstock Cape Town – recognised among the top three manufacturers of luxury catamarans in the world. On the small craft side, Gemini has established itself as a leader in the military, rescue and recreational market for rigid inflatable boats.

“The list of exhibitors for the 2017 iteration is growing. With limited space on land and on the water it makes sense to get in early and secure desirable positions,” said Whiting. “We are delighted with Messe Frankfurt coming on board. Their marketing muscle and reach to other markets on the continent will no doubt expand the exhibitor as well as visitor base going forward.”