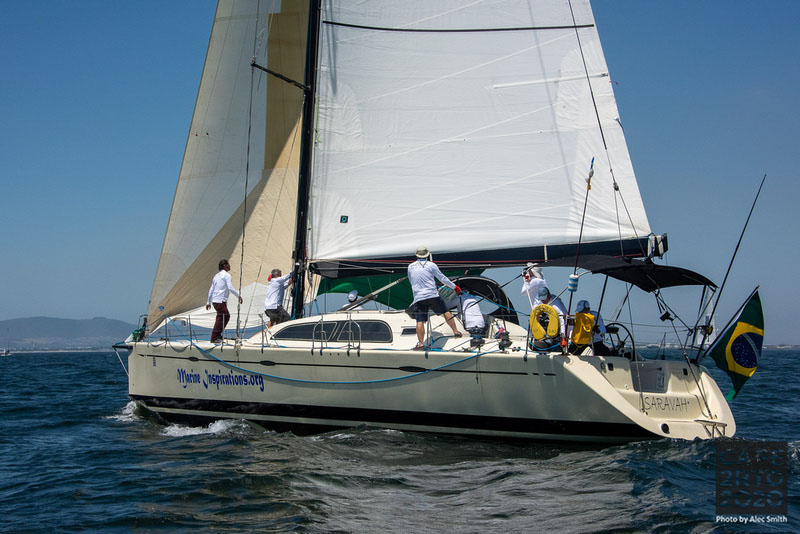 Saravah has been nibbling away at the leader board for days, and now lies in 2nd spot.
pic by Alec Smith

I cannot help but feel that the crew aboard ‘JM Busha 54′ are sailing to win this race on handicap – no more, no less.

They are sailing just south of the 20 degree parallel, and into the oncoming storm, and sailing fast too as in the last 24 hours (06h00 update) they covered 193nm – the highest in the fleet, and they are the smallest boat!

Similarly, ‘Haspa Hamburg’ is taking the shortest route and heading just north of Rio, and she now wears the leaders crown on handicap.

So some bold moves have been made and intentions made clear.

More interesting is the fact that the estimated overall handicap time is reducing quite dramatically right now. A few days ago the ‘JM Busha 54′ team were 5 days or so off the pace. Right now they are less than 2 days off the pace, sailing fast and making good miles with a VMG of 8 knots – again the highest in the fleet.

The slowest in the fleet was ‘Sulanga’, the most northern boat at 17degrees South, with just 65nm in the last 24 hours.

Noticeable too is the fact that ‘Zulu Girl’ has chosen to alter her course back to a more westerly course, rising back up the leader board to second overall again.

That was all shown at the 06h00 update on YB Tracking.

The JM Busha 54 crew sailed the furthest in the last 24 hours.
pic by Alec Smith

The 10h00 update shows very little alteration of the courses chosen, but big shifts on the monohull handicap leader board, and a complete change in the race dynamic for overall honours.

Lets’s look at the weather quickly as this has concerned many people in the last few days. “Windy” shows that the bad weather should pass to the south of the fleet, so hopefully all the doom and gloom has gone and the fleet can continue to race for the finish without obstacles in their way. But, light winds may plague the fleet as it closes Rio. Cabo Frio, at the entrance to the bay in which Rio lies, is notorious for its fickle winds and having dashed the hopes of many an overall race contender in past races. From now to the finish the navigators and weather strategists will be doing a lot of soul-searching to weave the best route through the light patches – with possible victory or a podium place the bonus. The smartest of them will win the race.

‘Mussulo’ has snatched the leader’s crown on handicap from ‘Haspa Hamburg’ whose position at the top of the fleet was very short-lived. ‘Saravah’ continues to be in the mix, while ‘Zulu Girl’ has dropped back to 4th overall – and ‘JM Busha 54′ has dropped out of the handicap race again, with her projected corrected time being 4 days greater than the top 4, and 2 days greater than the 5th placed boat being ‘Ballyhoo Too’.

All the contenders for the leader’s crown have between 500 and 750nm to go to finish, so the race is really hotting up. Potholes and mirror-like seas are not what they want – just enough good steady breeze and calm seas to enable them to get all the big sails packed with wind to pile on the miles all the way to the finish line – and create a thrilling close finish.

It’s certainly not over yet, and there could quite easily be some big changes on the leader board – so don’t stray or go away, stay glued to YB Tracking HERE