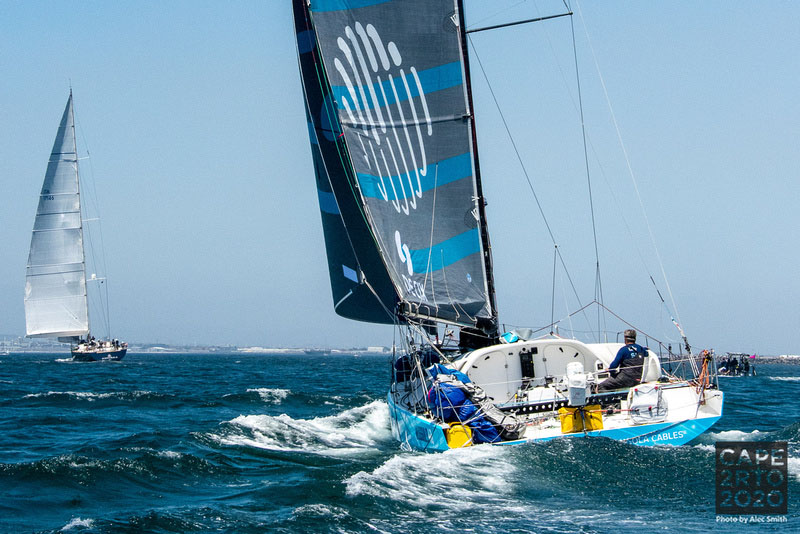 Mussulo 40 and Haspa Hamburg have been sailing within 5nm of each other for some time now.
pic by Alec Smith

Even for this old hack there’s lots of head scratching today as not much has changed in terms of boat positions in the last 24 hours making it difficult to scribble an overview. And the long-range weather forecast still weighs heavily.

Okay so lets attack it like this. ‘Haspa Hamburg’ had the best 24 hour run of 211nm followed by ‘Mussulo’ with 207nm, ‘Zulu Girl’ with 199nm and then ‘JM Busha 54′ with 189nm. This tells us very little other than the crew on ‘JM Busha 54′ seem able to keep reeling off good runs day after day – and as the smallest in the fleet, along with her sisterships, that’s pretty impressive. And ‘Haspa Hamburg’ and ‘Mussulo’ have been about 5nm apart for a long time now.

The weather warning issued by the Race Committee does not appear to have galvanised anyone into taking drastic action just yet. Well not according to the tracker. Their advice was to head to 20degrees South, but the courses of the southern fleet specifically have not deviated much in the last 24 hours. This means that they have either ignored the advice given, or their navigators have done their homework and don’t believe the system forming near the coast will affect them unduly. Or, maybe they are waiting and watching as that system is 600nm or more away – or 3-plus days sailing?

I know that I would not like to be the navigator right now.

Ahead of ‘Zulu Girl’, about 90nm NNW, are ‘Mussulo’ and ‘Haspa Hamburg’, who together with ‘Sulanga’ are estimated to finish around mid-afternoon on 27 January, and ‘Zulu Girl’ in the early hours of the following morning. So amongst the three monohulls there is a massive tussle going on for supremacy – and the honour of winning the race overall on handicap. ‘Zulu Girl’ is hanging onto the transoms of ‘Mussulo’ and ‘Haspa Hamburg’ like a dog with a bone, and they have hardly been able to shake her off. But ‘Zulu Girl’s’ course always tends to be a bit lower than her rivals, and if this does not play against her long term, it may consolidate her position as the overall leader.

So to put things in a nutshell, this is who wears the leaders crowns as at 06h00 this morning:
Double Handed – Mussulo
Monohull – Zulu Girl

What does interest me right now is that ‘Zulu Girl’, ‘Mussulo’, ‘Saravah’ and ‘Haspa Hamburg’ are the four contenders for handicap honours with 18 hours separating them. 5 days behind, also on corrected time, is ‘JM Busha 54′!

The only thing that may change the above is the weather up ahead – and that ocean racing can be a very cruel game to play! 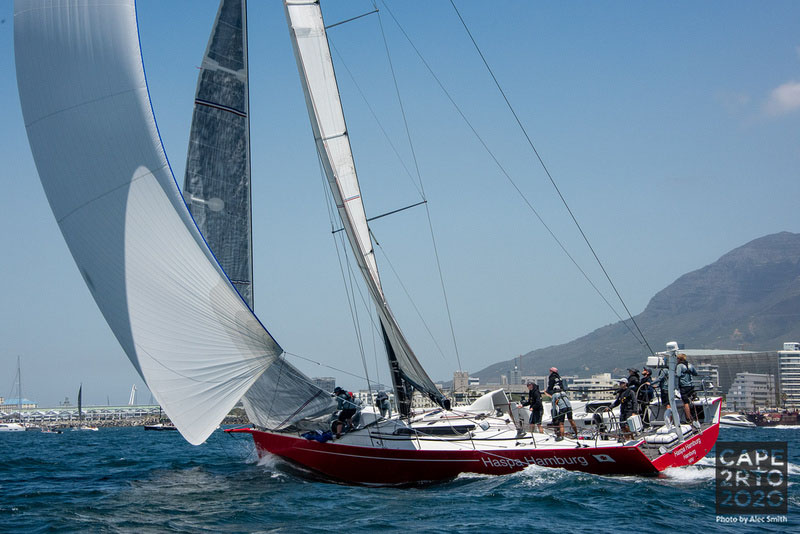 Haspa Hamburg is having a classic duel with Mussulo 40 who is just 5nm away.
pic by Alec Smith