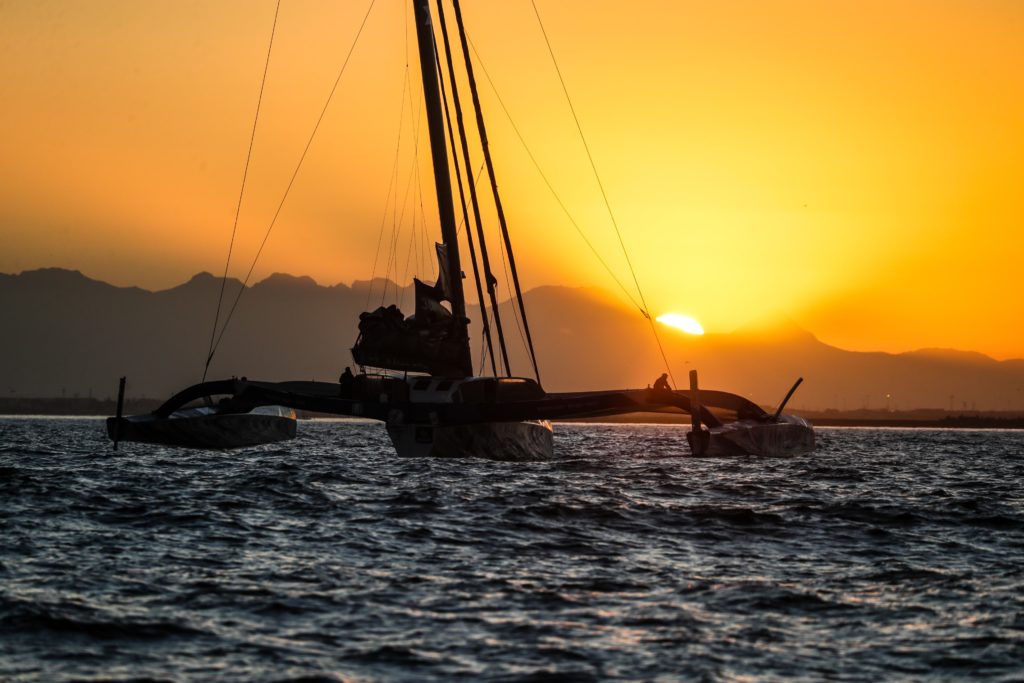 MACIF made a pitstop off Cape Town during the night.
pic by LIesl King

Cape Town has once again lived up to its reputation of being the “Tavern of the Seas” as all four trimarans have either passed by or made a pitstop in preparation for the final leg.

Maxi ‘Edmond de Rothschild’ got the ball rolling, leaving Robben Island on Wednesday evening at 19h16. During the night, ‘MACIF’ made a pitstop before setting sail again at 9h20 yesterday morning, hot on the stern of ‘Actual Leader’. Last but not least, ‘Sodebo Ultim 3′ has been docked at Cape Town since 10h00 yesterday.

After 15 days, 9 hours and 16 minutes at sea, having covered a distance of 9161 miles at an average speed of 24.8 knots, Maxi ‘Edmond de Rothschild’ was the first trimaran to round the Robben Island course mark. It was smooth sailing into the night for Franck Cammas and Charles Caudrelier, who were nevertheless able to enjoy the sunset on Table Mountain. Franck tells us: “We went from 30 knots of wind to zero in less than a minute, and we wondered how long this would last. The wind then came back from the opposite direction and we were able to get moving again. Now our eyes are set on Brest.” 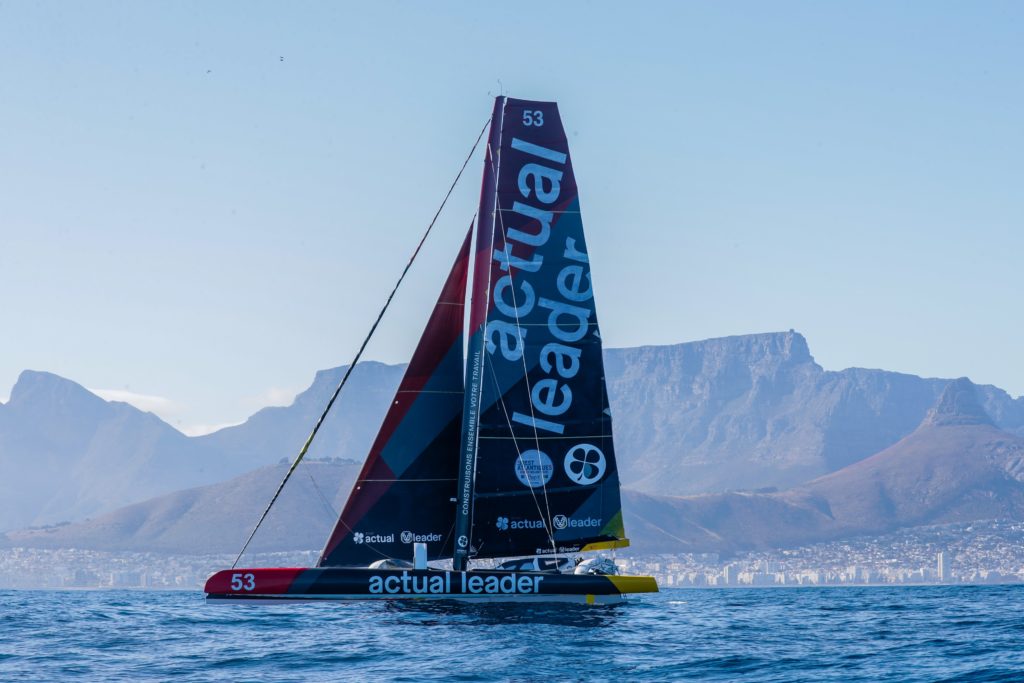 Actual Leader passing the ‘Taverrn of the Seas’.
pic by LIesl King

A little less than eight hours later, ‘MACIF’ arrived in Cape Town at 02h55am for a pitstop, which lasted 6 hours and 25 minutes. Returning to the race, François Gabart and Gwénolé Gahinet rounded Robben Island 24 minutes later in third place, after Maxi ‘Edmond de Rothschild’ in first, and ‘Actual Leader’ in second. 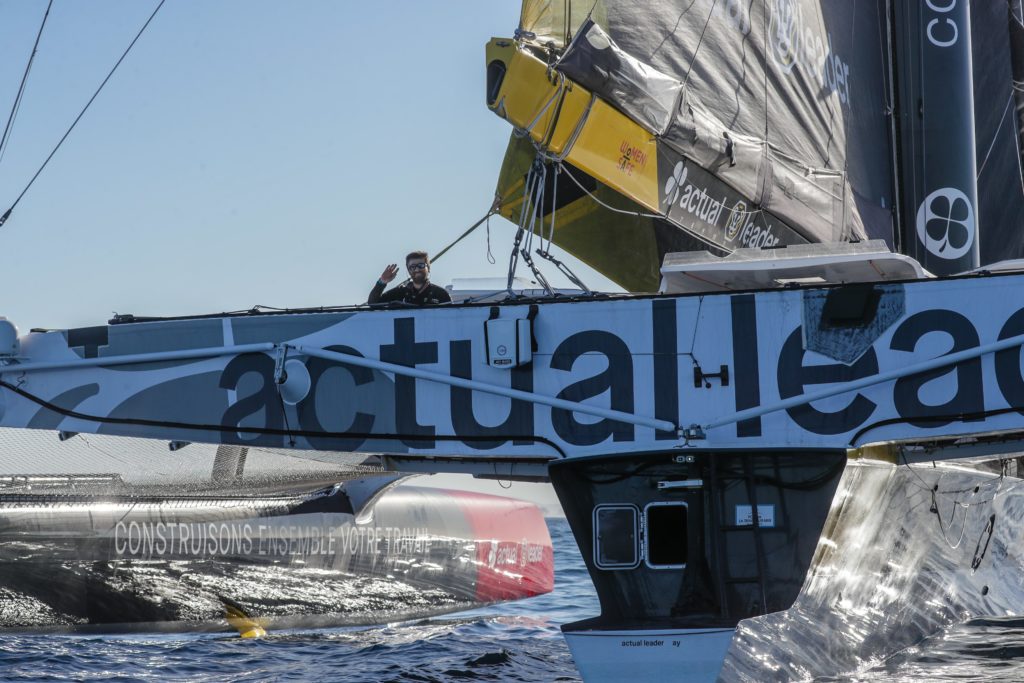 This pic gives an idea as to just how big these trimarans are.
pic by LIesl King

In a video sent by the MACIF media man Jérémie Eloy, François Gabart commented on their second pitstop: “We had a few problems that made it difficult to manoeuvre the boat, so we made the most of being near the coast to make a short pitstop. We arrived just as day was breaking in Cape Town. We didn’t have much time to appreciate the beauty around us, we just wanted to set sail again as soon as possible. The good news is that the boat is fully repaired.”

Thomas Coville and Jean-Luc Nélias also made a pitstop just as ‘MACIF’ was setting off again. Once they arrived on land, Thomas Coville explained: “We crossed ‘MACIF’ as we were arriving. We then checked the damage to our three different rudders, and we are still yet to confirm whether the boat will be in full race mode. We’ll know more tonight.”

As of this morning, Friday, ‘Edmond de Rothschild’ has a 303nm lead over ‘Actual Leader, which is a mere 11nm ahead of ‘MACIF”. ‘Sodebo Ultim 3′ is still docked in Cape Town.

Edmond de Rothschild is humming along at 23.5 knots, with a VMG of 23 knots! 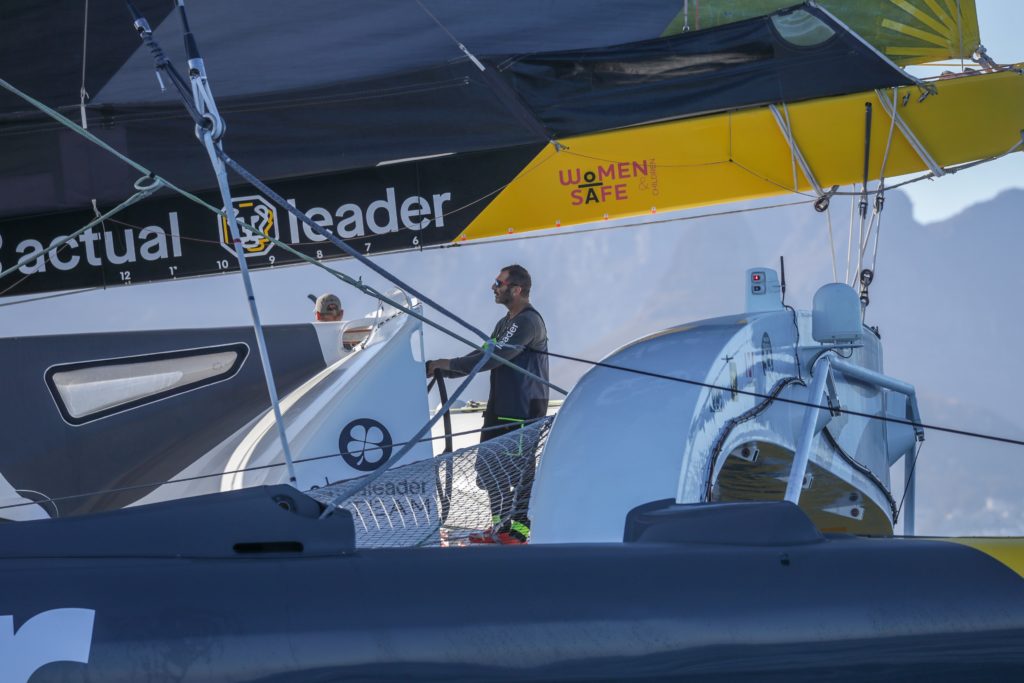