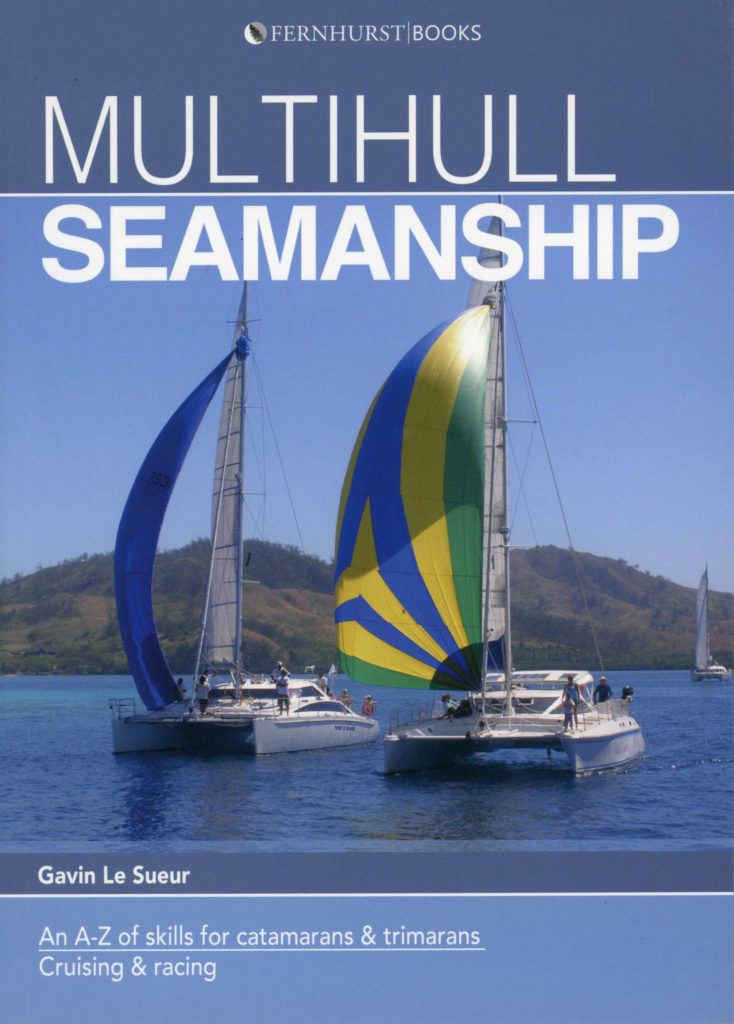 This book has been one of the most popular books SAILING Books has ever had as multihull sailors are starved of good info on this aspect of their boats and the sport.

This new volume has been updated and republished in a completely different format – now a smaller more user-friendly sized book.

The sub-title is an A-Z of Skills for Catamarans & Trimarans.

Multihull Seamanship is about sea-going catamarans and trimarans and the skills needed to understand and enjoy them to their utmost. Both racing and cruising yachts are catered for, as are trailer-able multihulls.

Over the past 35 years, the author has owned 7 different sea-going catamarans and trimarans. He has cruised and raced them, he has holidayed in them and lived on them with his family. He has faced high seas, dismasting, capsizes, helicopter rescue and had a lot of fun too.

It is those experiences which make up Multihull Seamanship.

As Gavin says: “I have had my share of disasters which has given me an insight into things that can go wrong. Others have also shared their experiences, and where this knowledge has benefit for everyone else, I put it down in the book.”

Seamanship is not a black and white skill. It is an evolution of knowledge; a building of information through experiment, thought and experience. There is no definitive word on an evolving skill. Multihull Seamanship started
as Gavin’s personal index of ‘how-to’s. It has grown through experience and others sharing their knowledge.

As a result it should be on the bookshelf of every sea-going catamaran and trimaran.

This book is for people who are already multihull sailors, or for those who are contemplating multihull sailing. It has served this community for over 20 years and this second edition is fully updated. It is illustrated with delightful line drawings by Nigel Allison.

About the Author
Gavin Le Sueur built his first multihull, a 16 ft Mosquito catamaran, while at high school. After graduating in Medicine from Melbourne University, he purchased and moved aboard a 35′ Hedley Nicol ‘Wanderer’ trimaran.

To learn as much as possible about multihull sailing he decided to compete in the two-handed bicentennial Around Australia Yacht Race with his future wife. For this adventure they obtained the then fastest offshore
racing catamaran in Australia – a 37′ Crowther Super Shockwave named D Flawless which they raced in many Southern Ocean races. In one of these they sailed through the eye of a cyclone and completed the race only to be struck by a whale when sailing back home and forced to abandon ship. They were lent another catamaran for the gruelling Around Australia race which they completed, getting engaged on the finish line.

Since then they have owned 5 different catamarans in which they have cruised and raced in Australia and explored the Pacific and south-east Asia.