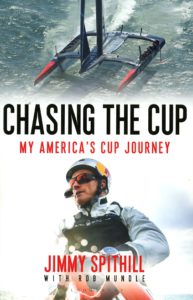 My America’s Cup Journey
by Jimmy Spithill, with Rob Mundle

Born with physical disabilities, Spithill was bullied as a child at school, yet this made him even more determined to succeed in everything he did.

Born into a poor family, he did not have the ‘nice’ things other kids had, but what he did get was a good grounding in having to overcome adversity – and an opportunity to learn to sail. At a very early age he made it quite clear that his ambition was to win the America’s Cup!

He has both won it and defended it, and has done six America’s Cup campaigns. Few people have such lofty dreams come true, but as one reads about this remarkable man, one realises that his determination and drive to succeed is what creates his successes.

His journey to the cup was not an easy one, and certainly not one handed to him on a platter. Rather he had to work damn hard every inch of the way, and hard work is something he never shies away from.

His first ever dinghy race was in a ‘clonker’ which the other kids laughed at when he turned up. But he won his first ever race, and continued his winning ways in virtually everything he sailed. He worked hard on his sailing, put in long hours, and never sat back waiting for invitations or sponsors to get his to events. And he became Australia’s Junior Yachtsman of the Year.

He made it on the match racing circuit too, and quickly his name was becoming highly recognisable, and with this recognition came opportunities and many life lessons too. Yet his determination and will to succeed always saw him through, as did his personality and sportsmanship.

On sportsmanship, few know that after the final race of the recent America’s Cup when his Oracle Team USA lost to Emirates Team New Zealand, he took his crew to share a few beers with the victors in their base – something unheard of, and appreciated by the victors.

He may come across as brash, and that’s certainly the Jimmy Spithall I got to see and know, especially in the 35th America’s Cup. But this was simply his way of dealing with the opposition – unnerving them, psyching them out and doing what he could to put them off their game, which is all part of sport today.

Spithill, in his own words, has lived the dream. He has done 6 America’s Cup Campaigns. He has the most America’s Cup race wins as skipper and is on par with Sir Russel Coutts. He was skipper when the greatest comeback in the history of sport was made. And, he has both won and defended the America’s Cup.

It’s good reading as one gets a very good insight into a man who has achieved so much in sailing, but more importantly the sacrifices made and the time devoted to his sailing to succeed are all good lessons – whatever your age.

This book is available from SAILING Books.