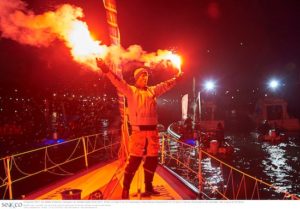 The winner of the Vendée Globe has had a double success taking the title of IMOCA world champion for the second time, for the period 2015-2016, which ended with the Vendée Globe.

This is the second time Armel Le Cléac’h has been crowned champion after his first win in 2008. The skipper of Banque Populaire follows in the footsteps of Jean Le Cam and can now happily move towards new horizons with the feeling that he has accomplished all he set out to do. Proving that the standard in this IMOCA championship is very high, Armel ended up ahead of Alex Thomson, Jérémie Beyou, Yann Eliès and Jean-Pierre Dick in the rankings.

Armel Le Cléac’h: “A great way to leave the IMOCA circuit”
“I’m very pleased with this second world championship title, which has rewarded my consistency and is a great acknowledgment of what we have achieved,” said the overjoyed skipper of Banque Populaire. “I’d like to share this award with the whole of my team, who worked so hard to get here. We adopted a method, which involved pacing ourselves to achieve our goal, which was to have a fantastic Vendée Globe and win it. The Banque Populaire IMOCA project began back in 2011 and everything worked well throughout that time with two great boats, including one we built ourselves. We have left our mark coming second and then winning the Vendée Globe. This World Championship title is a nice way to leave the IMOCA circuit, before we take up new challenges in the Ultime class, where we hope to do just as well.” 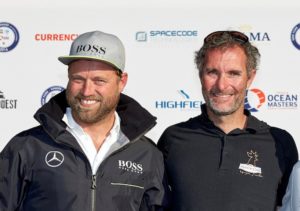 With a total of 351 points, Armel Le Cléac’h finished some twenty points ahead of the runner-up, British sailor, Alex Thomson (331 points), who really put the pressure on him during the Vendée Globe. Just two points behind Alex, we find Jérémie Beyou (329 points), who made it to the podium with a single point more than fourth-placed Yann Eliès (328 points). While the usual suspects in the IMOCA circuit were there in the top ten in the 2015-2016 World Championship (like Jean-Pierre Dick, Jean Le Cam and Nandor Fa), there were some pleasant surprises, such as sixth place going to Fabrice Amedeo, followed by Louis Burton (7th) and Eric Bellion (8th).

President of the IMOCA class, Antoine Mermod is very enthusiastic about the names of the sailors making up the podium in the 2015-2016 Championship: “Armel Le Cléac’h had a great championship over the past two years, always up there at the front showing remarkable consistency. The 2015-2016 championship has crowned one of the biggest names in the history of the IMOCA class, who was runner-up twice and winner of the Vendée Globe. The IMOCA class is very proud that Armel is its World Champion. The Championship shows its worth and this is reflected in the high quality of the skippers making up the podium. The class would also like to congratulate Alex Thomson and Jérémie Beyou on their performance. Alex is one of the most experienced IMOCA skippers and maybe next time he will make it to the top of the championship… As for Jérémie, he made it to the podium of the major races aboard a boat that didn’t belong to the latest generation. His new boat has to make him one of the favourites for the next title.”