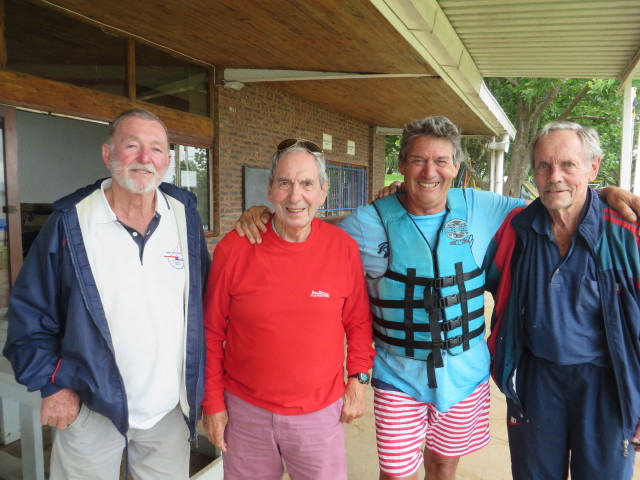 I do love the history of our sport, especially the personalities involved and the vivid memories of sailing in ‘their days’ which they recall with great gusto, enthusiasm and a touch of nostalgia.

We have a wonderful sport. Regrettably its history is being trashed every single day as mementoes, pics, newspaper and magazine cuttings on the sport are tossed into trash cans – instead of being preserved.

So when John Wright sent me some the info below, and the pic which was taken at Midmar Dam during the Sprog Nationals in late December 2017, I was unable to contain myself and share it as far and wide as possible.

This is what John wrote:

“In the pic of the left is Chris Duff, a many times National Formula One Champion and my former Sprog crew for many years.

“I am next to Chris, and a former National Sprog champion on 3 occasions, and the oldest sailor to ever win the Nationals.

“Next is Walter Davy, a Springbok Fireball sailor and also a former Sprog sailor.

“On the right is John Barry, a former Spearhead sailor and Chairman of SAYRA (South African Yacht Racing Association) for many years.

“All of us used to be the team sailing with John Sully on the Vaal Dam back in the ‘70s.

“We are quite a band of extremely old friends with a total age in excess of 300 years.

“Interestingly, John Barry at 82 had to give up playing squash two months ago because of a damaged ankle, but is still managing to play tennis!”