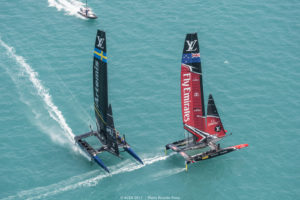 LVC day 3. Artemis vs Emirates Team New Zealand. What a tight and close race that was.
pic by ACEA 2017/Ricard Pinto

America’s Cup Race management is responsible for managing and administering the sporting and competitive rules of the 35th America’s Cup. ACRM is headed by the Regatta Director, Iain Murray, who has been appointed by a majority vote of the Competitors. Iain Murray has independently established ACRM in consultation with the Competitors to serve as the entity responsible for overseeing the functions of the 35th America’s Cup Regatta Officials.

How do ACRM & the teams communicate?
A) ACRM is in radio contact with all teams.
B) Flashing lights on yachts themselves. 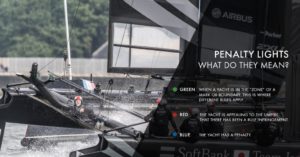 Wind measurement:
Unless the Regatta Director considers conditions too rough, the average wind speed must be between six and twenty-four knots to race. This is measured as an average true wind speed, for the whole of the period between eight and three minutes before the start of each race, the wind speed is an average over a 30 second period.
The wind measurement is taken on the race committee signal boat at approximately five and a half (5.5) meters above the water, overseen by Regatta Director Iain Murray.

Frequently Asked Questions
Q: What happens if a yacht starts too early?
The yacht has to get 2 hull lengths behind the other yacht to complete her penalty.

Q: What happens if a yacht capsizes?
The race will be stopped by way of a black flag. This means someone is going to be disqualified (DSQ). If the capsize is NOT due to the other yacht breaking the rule, it is the capsized yacht that gets DSQ. If the other yacht caused the capsize, then the umpires ‘black flags’ the guilty yacht.

Q: What happens if a yacht goes beyond the boundary?
In pre-start = nothing. After starting = penalty (lose 2 lengths to the other boat).

Q: What happens if a yacht fails to get to the start time due to technical failures?
That yacht forfeits the race.

Q: What happens if there is disturbance from a spectator boats or other non competitors?
ACRM has the right to abandon the race for safety purposes.

Q: If a sailor falls off, can the yacht finish and win the race?
Yes.

Q: Why is there an upper and lower wind limit?
For fairness, ability to race and safety.

Q: What is the process for a rule change?
This is voted on by teams.

Q: Any time when the points are shared?
If the measurement system (which measures to 1/10th of a second) cannot split the boats at the finish, it is a re sail. If both are disqualified in the race – zero each.

Q: If the race starts and the wind goes beyond the wind window (6-24 knots), does the race continue?
Yes.