America’s Cup Match day 4. Can the Kiwis Do it Today? 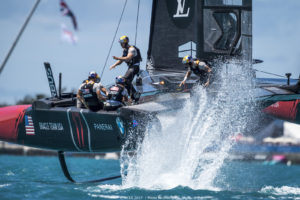 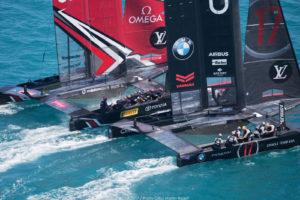 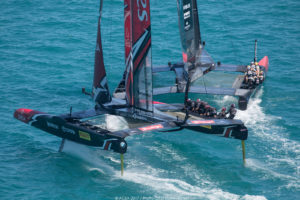 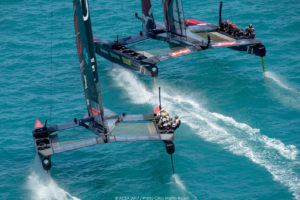 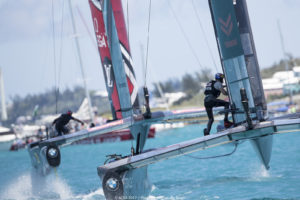 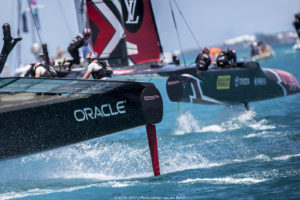 By Richard Crockett
There were two really good tense races last evening – with the Kiwis winning both and needing just one more win to claim the America’s Cup.

It was a day that belonged firmly to Peter Burling and the New Zealand team. I would not say that they had comfortable wins as they had to work very hard for them, and too me they did not really look as formidable nor as fast as they had done previously.

It was again their calmness under pressure and superior tactics and boat handling which saw them through, rather than pure boat speed.

Who really cares what it is that keeps them winning, as long as they can go into tonights races with enough reserves to win just 1 more race – as they are simply 1 race away from lifting the coveted America’s Cup.

For me the best moment was when Peter Burling annihilated the Americans in the pre-start of the second race – or the 8th race of the series.

Jimmy Spithill is obviously feeling the pressure as he was asked if there might also be changes to personnel on the ORACLE TEAM USA boat ahead of day five, to which he replied, “Anything is on the table. Every single team member in ORACLE TEAM USA will do whatever they can to help the team win.

“Once again we will go away and review everything and tomorrow we will put out the boat, the configuration and the team we feel will give us the best possible chance to win some races.

“We don’t need to think too much about the end result, all we need to focus on is winning one race, and one race at a time. We have to learn from our mistakes and come out fighting stronger tomorrow, that’s it, that’s all we will be thinking about.”

Here’s how the racing went:

Race Seven
It was a drag race over the start line in race seven as both teams made clean getaways over the line, Emirates Team New Zealand just ahead as they rounded mark one. Spithill blinked first, making the turn before Burling and slowly inching closer to the Kiwis as they headed towards gate two. On leg three there was very little between the two teams, but the Kiwis extended their advantage again as they headed upwind, giving themselves a 32 second lead as they headed into leg four.

Despite the growing gap, ORACLE TEAM USA did not give up, continuing to try and claw back the advantage the Kiwis were building, but it was largely to no avail. The New Zealanders put on a dominant display, extending their lead to 40 seconds by gate four and then slightly back to 35 seconds at the fifth gate.

On leg six it looked as if Emirates Team New Zealand would wrap up the victory cleanly, but a bad jibe gave ORACLE TEAM USA a glimmer of hope. Spithill and his crew did everything they could to stop the leader board ticking round to 5-1 to Emirates Team New Zealand, reducing the deficit to 13 seconds at the sixth gate, but they were unable to bridge the gap completely and that left the Kiwis two wins away from claiming the America’s Cup.

Race Eight
The second of Sunday’s two races started with Emirates Team New Zealand putting clear air between them and ORACLE TEAM USA well before the start line after Spithill had failed to box in his rival, having to watch Burling accelerating into a 13 second lead before Spithill had even crossed the start.

“We thought we would be able to pull a manoeuvre off, but clearly we couldn’t, it was a big mistake,” admitted Spithill on the poor pre-start. “That really handed it to Peter and these guys were in a pretty easy situation to hook us and that’s game over really.”

By gate two that lead was already up to 24 seconds and Spithill chose to split the course, a decision that appeared to pay dividends as the gap started to decrease, but a penalty on leg four as ORACLE TEAM USA sailed outside the boundary effectively ended their hopes in race eight.

Again, Emirates Team New Zealand continued to extend their lead, reaching 36 seconds ahead at mark four, sailing their America’s Cup Class (ACC) boat perfectly. This was in contrast to ORACLE TEAM USA whose minor issues kept increasing the difference between the two teams on the racetrack.

Finally, another dominant display by Burling and the New Zealand team culminated in a 30 second win in race eight over ORACLE TEAM USA, putting them on the brink of winning the 35th America’s Cup.

Peter Burling. “We were absolutely delighted with how the day went,” said Peter Burling after claiming back-to-back victories to take his team on the verge of their first America’s Cup success since the year 2000. “We were disappointed to give away a race yesterday but we certainly made up for it today.

“We’ve got a fantastic team and you can see that out on the water. We’ve all got the same understanding of what we want to achieve and we are all on the same page.

“Despite the lead we won’t get ahead of ourselves because we still know we have a job to do and it’s still an incredibly tough ask.

“A lot has been said about what happened four years ago, but I love the pressure. If you want to come all the way to Bermuda and win the America’s Cup then you have to deal with immense pressure. As a group we feel the pressure is bringing the best out of us and I think we’ve more than answered those questions.
Jimmy Spithall. “They (Emirates Team New Zealand) sailed better than us today and made a lot fewer mistakes,” conceded Jimmy Spithill on what was a disappointing day for ORACLE TEAM USA.

“They deserved to win both of the races because we clearly made far too many mistakes out there. We’re in a tough situation now and all we can really do is take this one race at a time.

“The plan certainly wasn’t to be in this position again, I can assure you of that, but we are here now so it is up to all of us to respond and react.

“You wouldn’t have been surprised to see a bit of a bad reaction out there today, but the boys kept fighting and that’s great. Potentially, in a situation like this you could see a team split apart, but when we got ashore everyone pulled together because we know this isn’t over.

“I still think we can win races with this boat. We’ve proven we can races against these guys if we sail well but if we make too many mistakes like we did today then we won’t win races.”