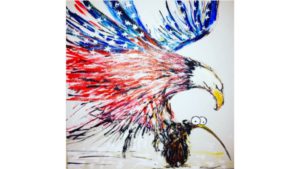 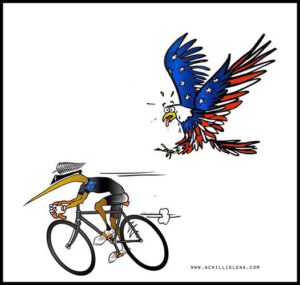 Will anyone ever forget the Oracle Team USA (OTUSA) comeback in the last Cup when they reversed an 8-1 defect. No-one, and particularly the OTUSA supporters who are using this as a psychological weapon against the Kiwis. Will it work? I doubt it as the Kiwis are a completely different team this time round, with virtually new crew, so the scars of their last defeat are unlikely to weigh on this new team.

If anything there will be a renewed determination to win The Cup and take it back to New Zealand.

First shots fired in the Battle of Bermuda
ORACLE TEAM USA skipper Jimmy Spithill fired the first salvo – an instagram post with an American Eagle swooping down on a hapless Kiwi.

But Emirates Team New Zealand didn’t take long to fire back. Cyclor and fight control specialist Blair Tuke, who won a gold medal in Rio with helmsman Peter Burling, quickly responded with his own shot of a Kiwi pedalling a bike at speed, with an astonished eagle struggling to keep up. The message was clear – we’re fast and we’re not going to be intimidated.

Both posts carried the #BattleofBermuda hashtag.

In the previous America’s Cup much was made of Spithill’s confidence in the press conferences, even when trailing by a seemingly insurmountable 8-1 score, when he told a questioner: “”I think the question is, imagine if these guys lost from here, what an upset that would be. They’ve almost got it in the bag, so, that’s my motivation.”

That was but one example of what would be a daily dose of Spithill one-liners and zingers, apparently aimed as much at motivating his own team as at destabilizing the opposition. Did he get into the heads of the Kiwis? Did it have an impact?

It’s impossible to tell. But it certainly raised the entertainment level and engaged fans in a way that hadn’t happened in the America’s Cup for years.

For Emirates Team New Zealand it’s the culmination of a long and difficult journey along which they’ve had to overcome all manner of obstacles.

As Peter Burling told the world’s media: “It’s taken a massive effort to get this far. We’ve faced a lot of adversity over the last couple of weeks with things like the capsize, but our shore crew really dug deep to get us a boat that is fully back to 100 per cent, and we are just really excited to get into it.”

The 26 year old helmsman, paid tribute to the support the team has been getting from New Zealand: “Having the Kiwi fans back home supporting us and getting behind us is something we really appreciate and it really inspires us to keep fighting hard and keep pushing forward, and I am sure it is going to be one hell of a battle out there on the water.”

And thanks to the level of competition through the Louis Vuitton Challenger Series, the team is feeling battle-hardened: “We feel we are a much harder team after the racing we’ve had and it’s full credit to the challengers for the way they pushed us in the series. And we definitely feel that we are a lot tougher than we were a few weeks ago.”

Burling also touched on the disappointment of four years ago in San Francisco and alluded to the fact that only one sailor from the 34th America’s Cup is still on the boat…skipper Glenn Ashby…and the other five first-choice crew are all under 30 years of age: “We all remember San Francisco and how close we did get,” he said. “And we definitely learned a lot of lessons and we are a lot stronger and different team now than we were back then.”

“For ourselves the America’s Cup is one of the unique sporting trophies where it’s all about who wins the last race not the first and that’s what we’ve been set up to do.”
Jimmy Spithill, helmsman on OTUSA sees a battle ahead, and not a walk-over, as the day before the first race he said “We’re ready for the Battle of Bermuda”.

The last meeting between these teams in the America’s Cup Match saw Spithill and his team complete one of the most remarkable comebacks in sporting history to win the 34th America’s Cup in September 2013.

“I think we’re going to see one of the best sporting events of the year here over the next two weekends,” said Spithill.

“These are the best boats, the two best crews and we’re both highly motivated to win. It’s going to be sport at its best.”

Spithill and his team beat Peter Burling’s Kiwis twice in the Louis Vuitton America’s Cup Qualifiers a couple of weeks ago. In the second contest, the winner would earn a one point advantage heading into the America’s Cup Match. Spithill and ORACLE TEAM USA won the race and the advantage.

With the Qualifiers victory, the defending champion starts the Match on 0 points, while Team New Zealand is on -1.

The first team to earn 7 points wins the America’s Cup.

“I definitely think this bonus point advantage is going to be important,” Spithill said. “Look at what happened last time when it all came down to one point.

“We worked had to get this, all the way through the Louis Vuitton America’s Cup World Series in 2015 and 2016 and then in the Qualifiers a couple of weeks ago. I know we’re much happier starting where we are, without being down on the scoreboard.”

Previewing what fans in Bermuda and those tuning in around the world should expect to see, ORACLE TEAM USA helmsman Jimmy Spithill, a two-time winner of the America’s Cup, said, “I think you have two of the best teams in the world going head-to-head in a real heavyweight battle, it’s going to be one hell of a fight.

“I would like to congratulate Peter and Emirates Team New Zealand for getting through a really tough qualifying process. It has been hard sitting on the sidelines and watching that racing, it exceeded all of our expectations but I think we are now going to see it go to another level. We are very excited and can’t wait to get it on.

“We are expecting very tight and very aggressive racing and there’s a reason both teams have got to this point. It is fitting that the top two teams from the Louis Vuitton America’s Cup Qualifiers are through to the America’s Cup Match, presented by Louis Vuitton. It will be close, the teams are at a very high level and you will see us both push it very hard.

“We’ve put in a lot of work, as well as watching and learning a lot about these guys. We have our race boat, is a very competitive boat, the guys have done a lot of work upgrading it and we feel we will be competitive.”

In reply, Emirates Team New Zealand helmsman Peter Burling said “It has been a massive effort to get this far. We’ve faced a lot of adversity in the past couple of weeks with things like the capsize but our shore crew have dug in really deep to get us a boat that is fully back to 100% and we are all just really excited to try and reward the Kiwi fans back home supporting us,” said Burling.

“As Jimmy said I’m sure it is going to be one hell of a battle out there. That’s what we are here for and that’s what we’re excited to get into.

“From how close we got in San Francisco, we’ve definitely learnt a lot, we are a much stronger and a different team from the one we were back then, we are just really excited to get out there and race.

“The America’s Cup is one of those unique sporting events where it is all about who won the last race and not the first. If history is anything to go by then the deficit didn’t mean anything at all going into the Match last time out and I can’t see it mattering too much this time round either.

“Myself and Jimmy are both only a small part of massive teams and we both have some great team members who have won a lot of things. We believe we have pulled together a great team but so have ORACLE TEAM USA and I just think that makes it all the more exciting to get out racing.”