A Historic Race. The Queen Mary 2 vs Ultimate trimarans 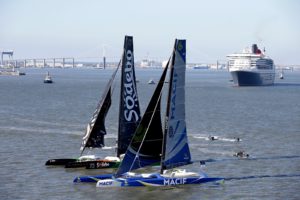 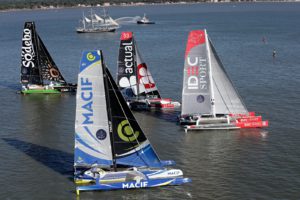 THE BRIDGE promises a thrilling transatlantic race which is an event reserved for ultimate trimarans over 81 feet (24.68 metres) and the Queen Mary 2.

Yesterday (25 June, 2017) – 100 years to the day after the arrival of the Sammies on the French coasts the waters of the Loire estuary bubbled with activity when, under the bridge of Saint-Nazaire, three cannon shots fired at 19h00, kicked off this 3,152 nautical mile oceanic race to New York.

With its unique course, THE BRIDGE opens a new route across the North Atlantic against the prevailing winds. The crews entered in this great symbolic first race will have to fight at the highest level tactically, in terms of pure speed, to establish the first reference time between Saint-Nazaire and New York. It is expected that there will be a 24 to 30 hours’ gap between the first sailboats and the Queen Mary 2, which crosses the Atlantic in a straight line or thereabouts.

Four sailors experienced in oceanic crossings have signed up to compete on THE BRIDGE. They are the Queen Mary 2’s first opponents to race across the Atlantic. Together with their crews, these offshore racing machines will race intensively on the playing field of the open Atlantic.