A Case of Sound Seamanship 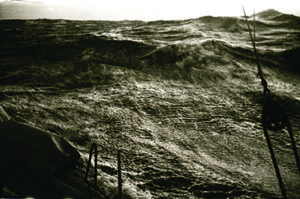 On board Assegai during the 1984 Vasco da Gama Race storm.
pic by Richard Crockett

As most South Africans know, Durban was devastated by rains storms, big wind and flooding yesterday.

And one man, Neville Bransby, bore the brunt of it singlehanded aboard his Shearwater 45 ‘Ocean Spirit’.

Knowing that there was inclement weather coming, Bransby who likes sailing singlehanded, decided to go sailing and test himself and his boat in some strong conditions. Just how strong and how bad the conditions were revealed only as the storm hit.

Bransby has done 3 Vasco da Gama Races to Port Elizabeth, he was once a professional diver, has spent much of his life on the sea and is a self-proclaimed adrenaline junkie.

In a telephone interview with him this morning he was quite open as to why he went out. “I, and my boat were 100% prepared, and I went out to test myself, the boat and my gear” he said.

The weather forecast he received showed winds of about 40 knots, and he was prepared for this.

The first thing the storm did was to blow his anemometer clean off the top of his mast so he never had an accurate measure of windspeed. A pity that!

“I have never experienced wind like that” he said. “With 3 reefs and a storm jib set I was knocked down completely with my primary winches under water, and water pouring into the cockpit. My duck boards were in and I never had a drop of water below” he said.

I setting his storm jib on an inner forestay, he found that the bottom hank was interfered with, so he added a Spectra strop to lengthen it a little. “I tied a bowline and then a round-turn-and-two-half-hitches with the tail for good measure” he said. “The wind was so strong and the jib flapped wildly a few times and literally blew my knots undone so I had a storm jib flaying half way up the mast”.

Taking this in his stride, Bransby headed for the foredeck, and despite being chest deep in water, he managed to take control of the storm jib and drop it and secure it.

He described the seas as being massive, and waves at least spreader height.

I asked him weather he felt intimidated and wishing for a few extra hands? “No, I went very prepared in every aspect, and felt totally in control. But, at the height of the storm I did a mental check on all my safety gear, and how I would deploy the liferaft should I need it, a check to see that the EPIRB was ready to be deployed at a moments notice, and that anything else in terms of safety gear I may need was close at hand just in case.”

As he was forced to dropped his storm jib, the boat was uncomfortable with 3 reefs so he dropped the main as well as drifted for two-and-a-half hours as he was unable to motor and make way in that seaway.

He eventually closed the coast at the stadium, and could only motor 15-20 degrees off the wind as he headed to the harbour entrance.

“I had a pair of goggles with me, and thankfully I did as without them I would not have been able to see.”

The irony of this whole saga is that when he arrived at the marina he saw the devastation as marina fingers and pontoons had broken free, and yachts had been damaged – some even sunk. Yet he was out at sea and taking the full force of the storm – and suffered absolutely no damage at all other than the anemometer that had blown off the top of his mast.

When back, he posted this on social media: “Just in case people think I’m nuts for sailing offshore in the gale today, it was planned. I left port with a storm jib and three reefs in the main. The gale was much heavier than predicted in Windguru, I had to drop all sail and still I was blown flat with water pouring into the cockpit, washboards prevented water entering the accommodation. At no stage was the situation out of control – money can’t buy this kind of experience. I got back to the harbour to find a MSC container vessel blocking the harbour entrance, but managed to squeeze past the bulbous bow with a metre clearance under my keel. When I got back to the marina I was met with chaos, the walk-on moorings had broken and the cat next to my mooring had sunk. Fortunately for me I was at sea and missed the carnage, let’s hope the moorings are insured!!!!”

Bransby coped flack from some quarters, as his act of going to sea to test his boat was described as ‘irresponsible’.

Naturally Bransby is upset by these comments as he feels he knew his limitations – and his boat, and never felt threatened or overwhelmed by the conditions in any way, and is much richer for the experience.

In fact, in my view, he acted responsibly by wanting to test himself, his boat and his gear in tough conditions – conditions that no one knew would deteriorate to the extent they did so quickly.

His only mistake was not to tell enough people what he was doing – and not taking any photographs!