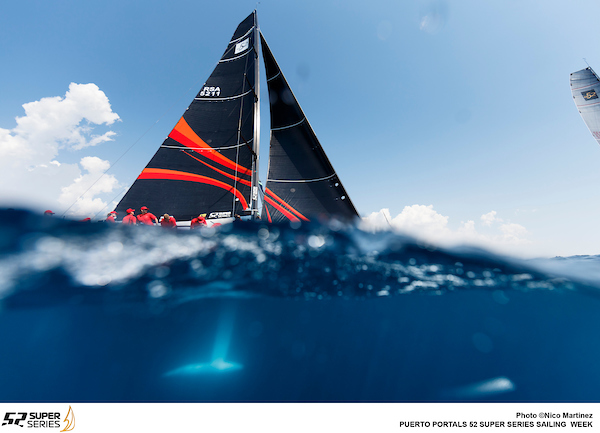 A great shot of Phoenix.
pic by Nico Martinez

Both Quantum Racing and Phoenix mastered the unusual Palma Seabreeze Conditions yesterday, and are now the top two on the podium. It may have looked like a relatively straightforward summer sea breeze on the Bay of Palma, but yesterdays two races contested by the ten TP52s at the Puerto Portals 52 Super Series Sailing Week proved particularly hard to read.

The fact that is was difficult to retain a high level of consistency across both races is perhaps best illustrated in the results of the usually super consistent Sled, who won the first race, but finished tenth in the second, and in those of the Italian America’s Cup challengers Luna Rossa, who came back from a weighty ninth in the first race to win the second race.

Over the two races, which take the regatta past its midpoint, the best were the circuit leaders Doug DeVos’s Quantum Racing, and Tina Plattner’s Phoenix. Both scored an aggregate seven points over Races 4 and 5, and so lie first and second on the event leader board.

Although the Bay of Palma has a reputation for usually being very regular and almost boringly predictable due to its reliable sea breeze, yesterday – once again – it was very “unlike Palma”. The sea breeze came in at 12 knots at the peak in the second race. It was patchy, streaky, and there were changes in wind pressure from one side of the course to the other, which clearly made it difficult for the tacticians. The explanation given by many is that the super hot temperatures have warmed up the sea so much in recent week that the air over the warmer water is not drawn in with the same force as the land heats up, the temperature differential being less pronounced. 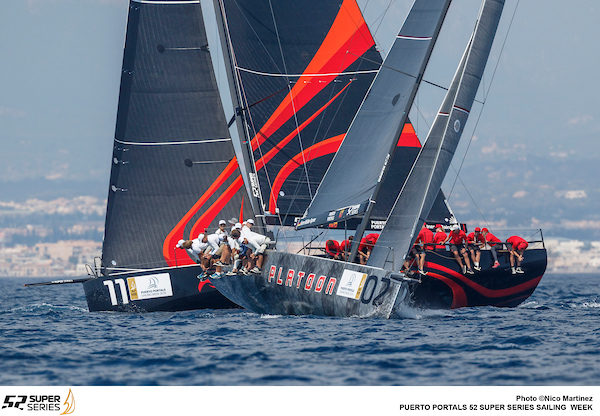 Phoenix duelling at the top of the fleet.
pic by Nico Martinez

Tina Plattner, Ed Baird, and the Phoenix team have been quietly replicating the form they showed in Zadar when they so nearly won the Royal Cup, pipped only by Luna Rossa on the last day. Tactician Ed Baird has done an almost equally fine job of keeping out of trouble and managing the risk-reward equation, whilst clearly having a fast, well set up boat.

Baird summarised: “We’re very happy to be in the position we are. Certainly a lot has changed here from Zadar, and the fleet has a couple more regattas under its belt. This is only Tina’s (Plattner) second event and its great to see her doing so well. So far, the key has been staying out of trouble. There has been a number of boats that have, for whatever reason, made choices or gotten into situations that could’ve made trouble, and its hard to get back out. The challenge is staying out of trouble, we’ve been really trying to get off the line clean, and we’ve had two good starts, and two not-so-good, and then another average one.

Tommy Burnham has been looking around the race course, and talking about the next breeze situation, and its not the normal Palma deal where you have to just go into one corner, and I think that by being able to have a little more open course it gives us more options.” 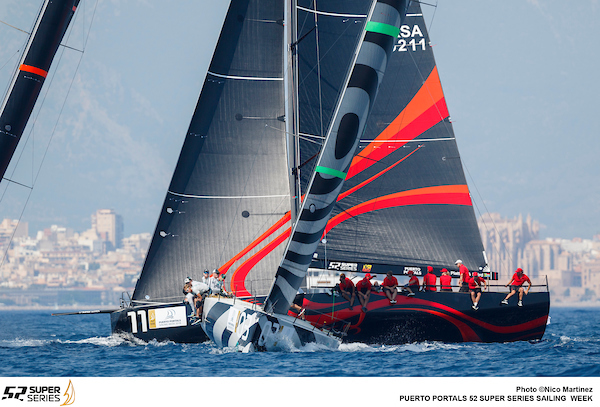 Tommy Burnham says of helm Tina Plattner who is still just at her second ever 52 Super Series regatta, he says: “Tina is doing great. She is really going to be a great competitor in the sport as the years go by. She told us at the early part of the season that she hoped that in five years she would be able to compete at this level and that would give her another five years before she got too old! I told her, ‘its not going to take that long and you’re very far from being too old’. She’s doing great, I think she’ll be pretty strong in five years. She’s having a lot of fun.”