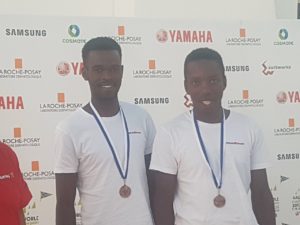 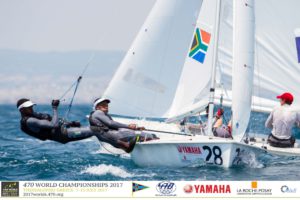 Asenathi Jim (helming) and Sibu Sizatu on trapeze in action on day 1 of the 470 Men’s Worlds.
pic by Nikos Alevromytis

Today (Wednesday) is the first day of the Gold Fleet racing, and the very first time that Asenathi Jim and Sibu Sizatu as a sailing crew compete in the gold fleet against the very best 470 sailors in the world.

They will be up against Olympic medalists, World Champions and a host of other up-and-coming sailors all hoping to make their mark in this highly competitive fleet.

The Gold Fleet is where the top sailors reside, and are those who have eliminated the balance of the fleet who sail separately. So this is cutting edge stuff!

For Asenathi, this may be old hat as it is his 6th consecutive World Championship Gold Fleet start. That’s very impressive for someone so young, but this man can sail – and sail fast too. So while it may not be daunting for Asenathi, it may be for Sibu. One hopes that their coach and mentor, Roger Hudson, has prepared Sibu sufficiently for the occasion – and calmed his nerves sufficiently to ensure he is not intimidated by the occasion.

This is a proud moment for this young team, yet they have the ability to be serious contenders in the 470 fleet for some years to come.

Roger Hudson shared some inside info about their performance yesterday.

“The boys struggled a bit yesterday. Upwind pace was down, seemingly because of some set-up issues which we have solved. Perhaps also a bit to do with the size of the effort they put in on day 1. Still, we are well poised and there is a lot to come.”

“Gold Fleet for a new combination is impressive. Of course we want more out of the regatta and we’re looking forward to today” he said.

Although there is no live tracking, the results are posted promptly.

So follow Asenathi Jim and Sibu Sizatu, as well as Tammy Holden and Lea Smit who are in the Women’s event.