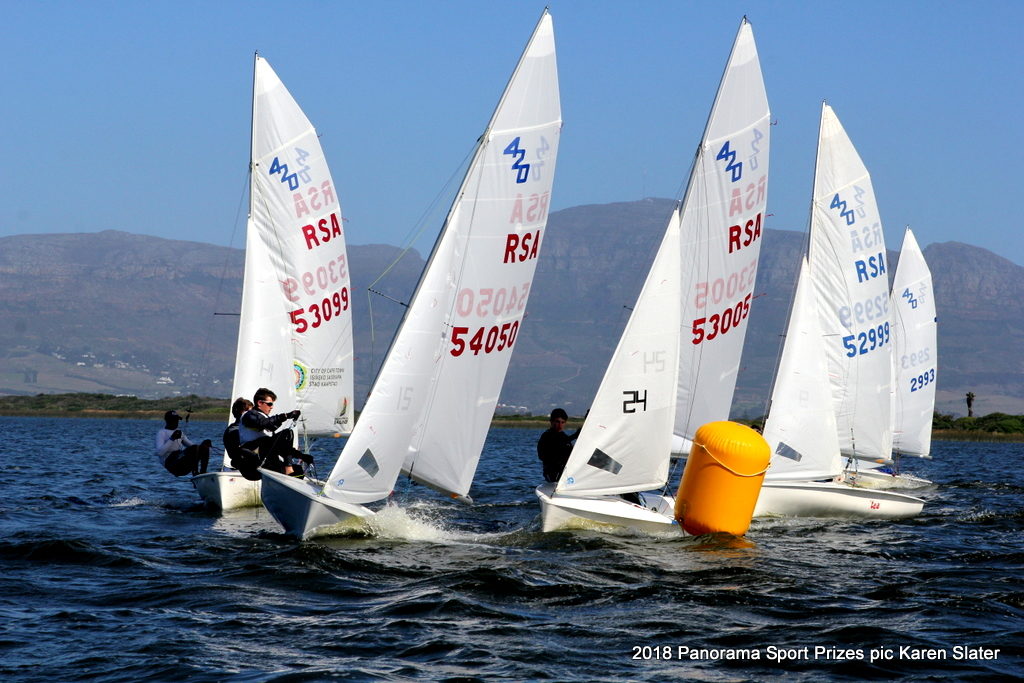 The Heritage Day weekend nationals was a bit of a homecoming, with ZVYC having been instrumental in the introduction of the 420 in South Africa over a decade ago. It was a very well attended championship with 21 boats.

We had a very good mix of young and old sailors, girls and boys, newcomers to the class and experienced sailors, and, important for the South African sailing community, we had a good representation of all race groups.

It is safe to assume that everybody likes the 420, because when the plan was hatched to run this championship everybody wanted to be part of it. Lorna Norris (class secretary for many years at the beginning of the class in SA), Dave Hudson, Craig Leslie, just to mention a few, all wanted to be involved. Never during the event have we had a shortage of volunteers. 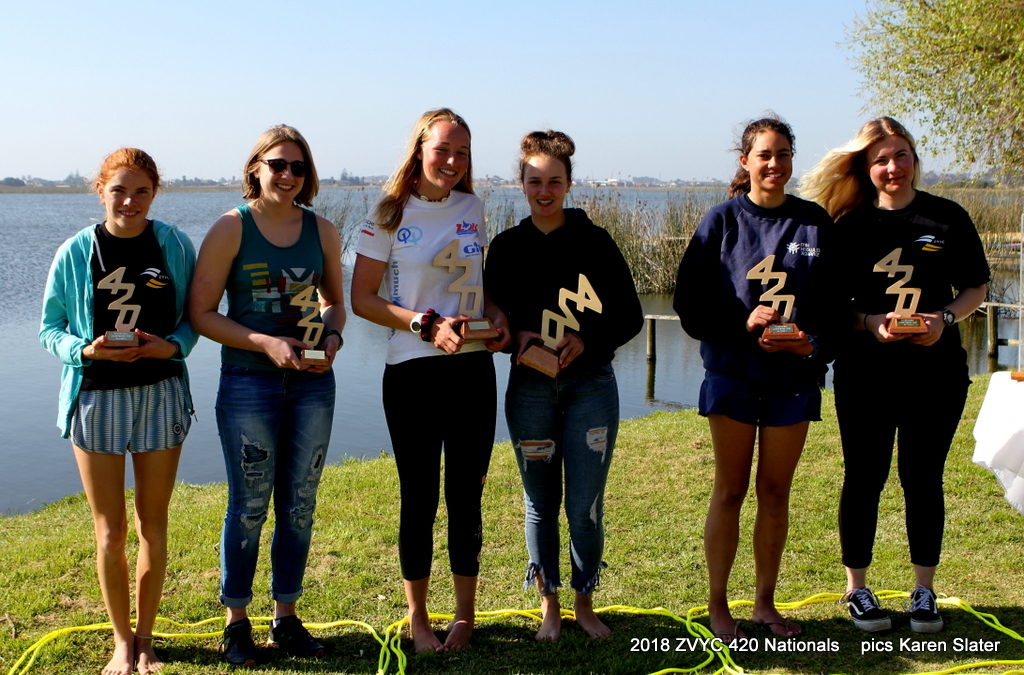 Thanks to the hard work of Stefania and Karen we were able to secure some sponsorship. Southern Ropes, North Sails and Ullman Sails provided us goodies for the prize giving and lucky draw, The Shell Garage in Grassy park sponsored us with petrol for our rescue boats, De Grendel wines came and did a wine tasting session for us after our AGM and provided wine for our braai, and Belbon Hills Wines provided us wine for the prize giving and for all our (over 18) volunteers.

There were three different courses that were alternated throughout the event, a normal windward-leeward course, a slalom downwind course (Zeekoevlei is too narrow to have a triangular course in SE winds) with a beat, and a triangle that the Bridge was able to squeeze in for the more southerly winds of Monday morning. Wind strengths varied over the three days, from 15- 18 knots on Saturday to 20 and over on Sunday to 12-15 Knots on Monday. 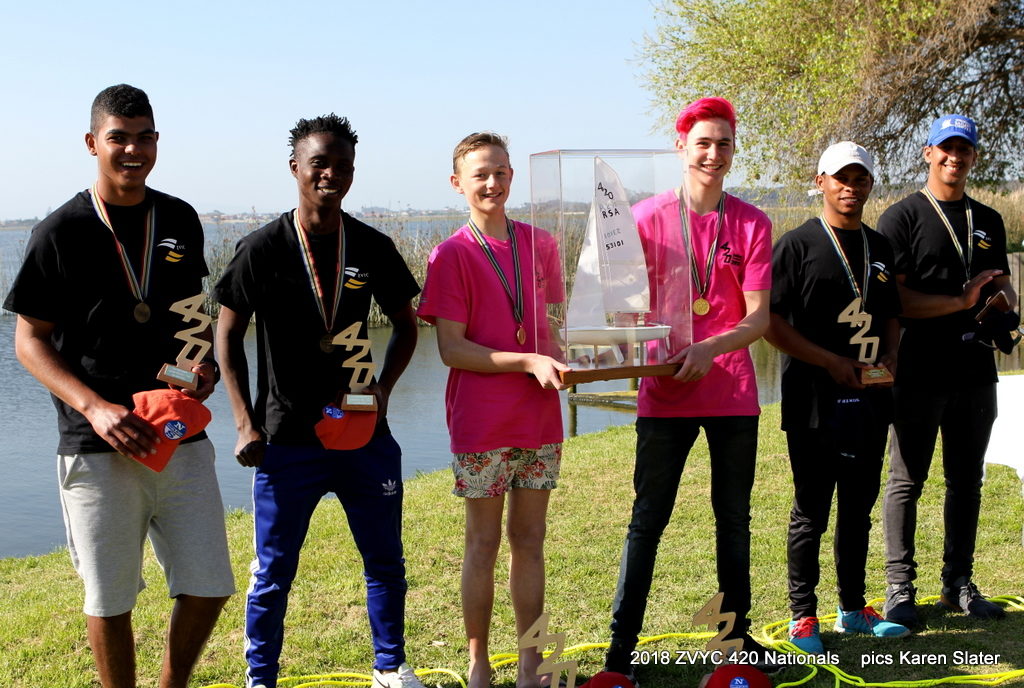 Matt Ashwell and Oscar Duys, neither quite out of Optimists yet, struggled in the heavier wind, but in the lighter breeze of the last day they took three bullets. Unfortunately for them it was too little too late to climb up the results sheet, but enough to clinch the lowest podium step in the U17 group. The only other sailors to have three bullets were Howard Leoto and Lance Curtis, who got their firsts in the stronger breeze of Saturday and Sunday.

Other 2 race victories went to Ross Mackinnon-Alex Falcon and one more race victory each went to Duane Petersen-Fayaad Shaik and to Tristan Tomlinson-Thomas Raynham. 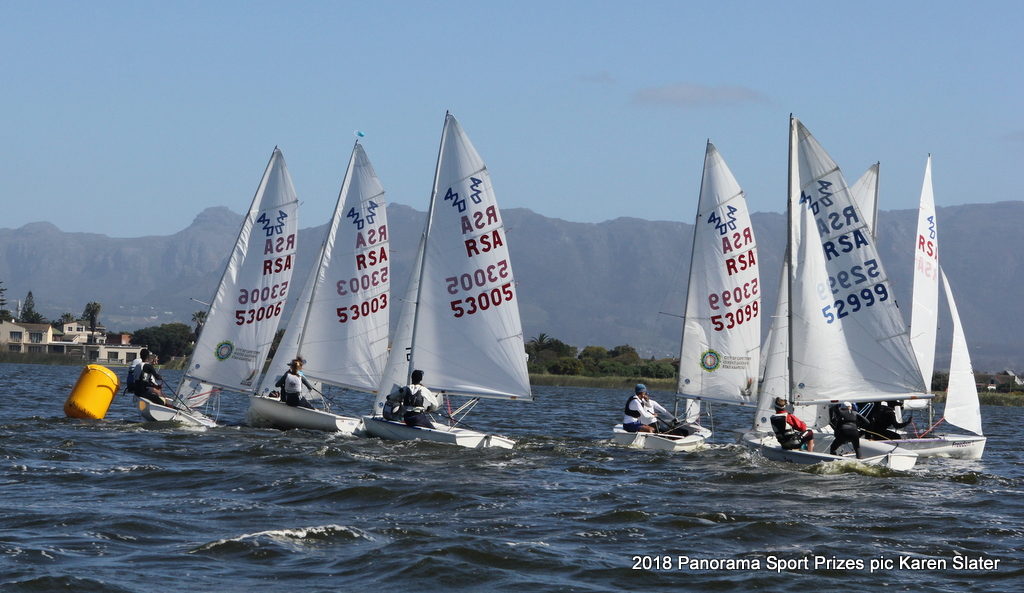 The competition at the top of the fleet was so fierce that the top 6 teams all had first places to show. In the end, with so many good sailors, it was consistency that paid off. The first two teams are the ones that sailed more consistently regardless of the wind strength and the course type. Neither of them dropped more than 5th in any race. In fact the playing field was so level that the winner and runner-up entered the last race of the series on equal points after discards.

Ross Mackinnon with Alex Falcon on the wire and Duane Petersen with Fayaad Shaik doing bow went into the last race all out. The third contenders to the title, Howard Leoto and Lance Curtis still had a chance to win, being only one point behind, and they mounted an aggressive pre-start duel with Mackinnon-Falcon believing that the battle with Petersen-Shaik could be fought later on the course. For five long minutes before the 420 class flag came down it was like watching two cats chasing each other in the traffic.

Unfortunately for Leoto-Curtis the wind dropped a couple of knots right after the start, and the two younger sailors got away purely on boatspeed. They acquired an early lead and maintained it until the finish line. Any chance for Howard and Curtis to chase the runner-ups to the title in the dying breeze quickly evaporated and they limped to the finish line in 7th place, a result they could not discard due to a prior OCS. It was still enough for them to secure 3rd place on the podium, behind Petersen- Shaik in second place and Mackinnon-Falcon Overall and U17 National champions.

The lighter winds of Monday also played against Tomlinson-Raynham who had still been in contention for the title the evening before. Four ‘not as good as yesterday’s’ places relegated them in 5th place overall, but still 2nd U17 team. 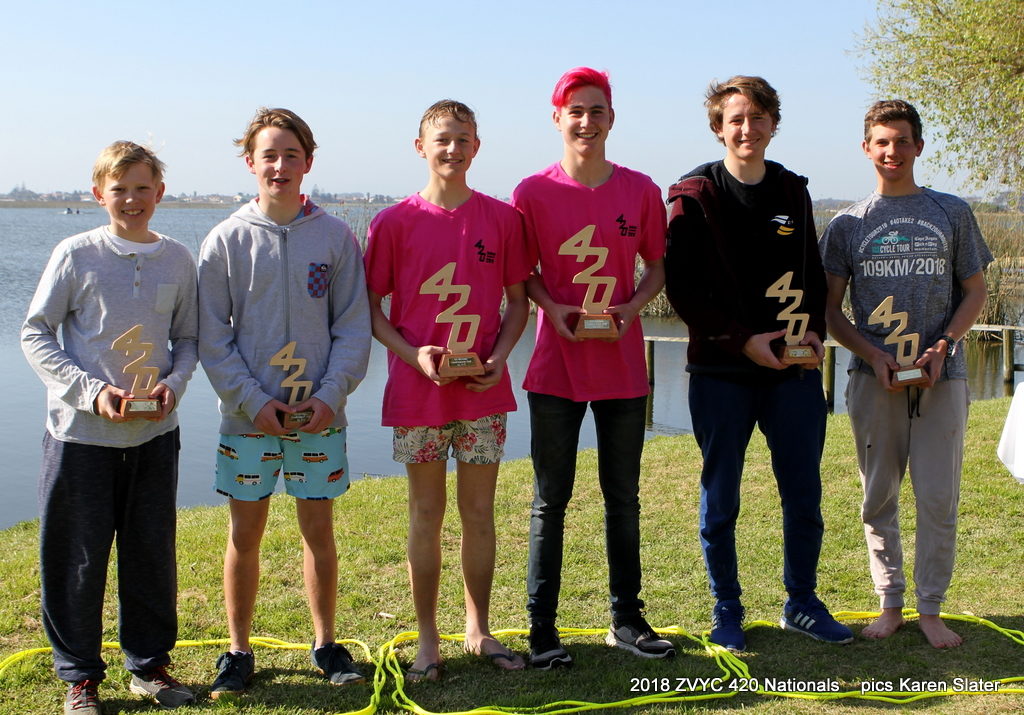 The Monday conditions nevertheless allowed a reversal of fortunes also in the Ladies division, where Jamima Baum with Tammy Bailes managed to invert the previous day’s trend and got their best race results, including a 2nd in the 9th race. This allowed them to climb a step higher on the Ladies’ podium, snatching the title that had been Sara Falcon’s and Chiara Fruet’s up to the middle of the series. Third in the Ladies division were Damita Olsson and Isabella Wright, two Laser sailors who teamed up for the event only two weeks beforehand, and managed to figure out what all these lines were for just before the first start. A Laser only has one sail after all, and it still moves forward.

Consistency is also what positioned Theo Yon and Mornay Harding in 4th place overall. At the end they never quite found that extra spark to propel them just that little bit forward to be a threat to the first three.

Credit has to be given to Mornay Harding, nevertheless, for getting five ZVSC teams on the water. This championship owes him 25% of the attendance. Mornay allocated all the boats he had available to his younger sailors and then borrowed a semi-abandoned boat from a Zeekoevlei neighbour for himself and Theo Yon and spent the evenings before the regatta literally rebuilding it.

Harding was praised for his efforts at the prize giving as were Hamilton Slater, another ex-Optimist sailor of the same generation and group of Ross, Alex, Matt, Oscar, Tristan and Thomas. In the previous months, while everybody else around him was teaming up for the championship with the best possible partner, Hamilton chose Theo Scheder-Bieschen, a young Optimist B fleeter, as his helmsman. For weeks they trained and Hamilton had to organize things in a slightly unorthodox way: for example he was working the mainsheet from the trapeze. It all seemed rather bizarre to most of his peers, but in the end Theo and Hamilton sailed a beautiful regatta and on the 8th race managed a 2nd place, their best result of the series. Had it not been for a broken jib in the 3rd race their overall position could have been higher than their 10th place.

Theo and Elisa Falcon were mentioned as the youngest helms, respectively 12 and 11 years old. There were no prizes for the oldest sailor. It’s more polite this way.

Joe Groenhof and Sebastian Lanz were recognized at prize giving for their Search and Rescue efforts, having diverted from their 6th race to go and capsize over Sara Falcon’s rudder that was floating somewhere beyond the leeward mark. Theirs was a regatta completely uphill. From never having sailed a 420 before, they bettered their results passing from RET to DNC on to DNF to finally have a personal best of 13th in the last race. Should 420 sailing not be in their future career, I think a job in Salvaging can be a certainty! 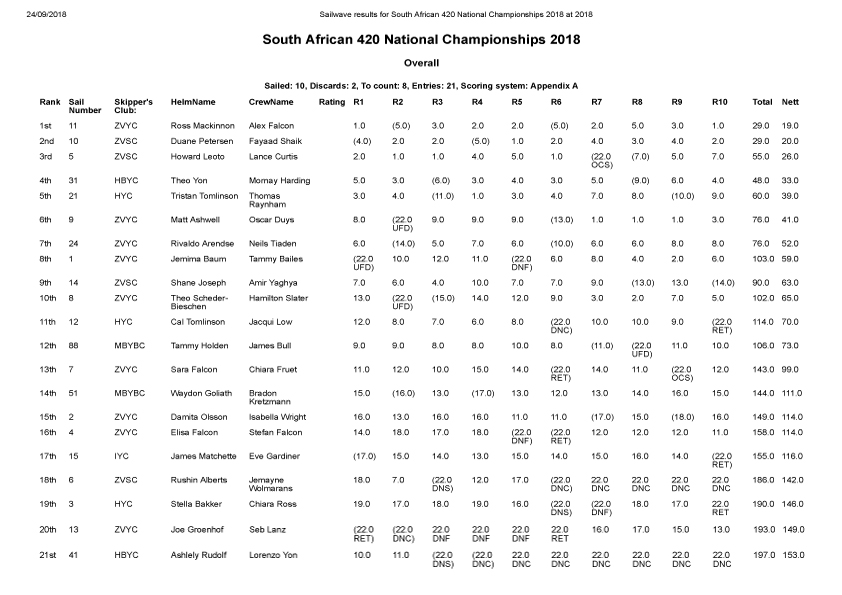 More information about the class HERE