This race is a year away from starting and already 30 sailors have entered to set out from Plymouth to recreate history at the start of a solo circumnavigation in small traditional long keeled yachts using just paper charts, a sextant and wind up chronometer to navigate by.

The Race marks the 50th anniversary of the original Sunday Times Golden Globe Race and the remarkable achievement of Sir Robin Knox-Johnston in becoming the first man to complete a solo nonstop circumnavigation.

More interesting is the fact that 3 competitors have chosen the Lello 34 as their choice of yacht. 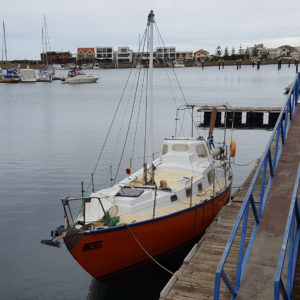 The Lello 34 is a wholly designed and built yacht. She was designed by Brian Lello, founding Editor of SA Yachting Magazine. The exact date of the launch of the first boat is uncertain, although Lello designed her in the early ‘60s.

The Golden Globe Race 50 years ago had 9 starters with just 1 finisher – that being Sir Robin Knox-Johnston.

All competitors have to complete a 2,000 mile proving trial, and these show that the challenges of ocean racing remain just as great now as they did 50 years ago. Several competitors have had problems during delivery or qualifying passages.

Don McIntyre, the race founder says of the dramas. “These events have been a wake-up call for competitors. The 2018 GGR is no more a walk in the park than the original event back in 1968. It will be a race of attrition testing even the fittest and best prepared. Wind vane self steering systems are much better than they were, but are still vulnerable to damage, and those who don’t carry spare parts are likely to be early casualties. Liferafts stowed on exposed parts of the deck have also proved at risk, and some skippers are now adapting cockpit lockers to protect them better and still have them ready for instant use. Skippers will now be re-looking at every part of their boats to reassess what parts could break and plan how to fix them when conditions are at their worst.”

Neree Cornuz, Gustavo Pacheco and Mark John Sinclair have all chosen Lello 34s for the race. 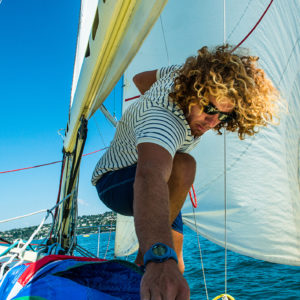 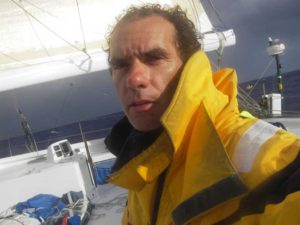 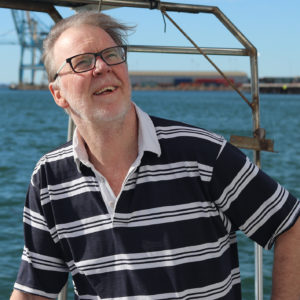 Neree Cornuz (26) was born and raised on his parent’s ketch, and completed his first Atlantic ocean crossing at the age of 2. He has been sailing and racing all kind of boats ever since. For the past 6 years he has been an officer in the Merchant Navy, but has now set up base in Geneva, Switzerland as a sailing instructor. He has purchased a Lello 34 to do the race in and plans to re-fit her over the winter

Nérée is the youngest entrant in the 2018 GGR, and purchased an engine-less Lello 34 in Cape Town.

Gustavo Pacheco (57). This will be his second solo sailing campaign. The first was the 2003 Mini Transat Race in which he finished 27th out of 39 entries, competing in the oldest boat within the fleet. For the GGR, he initially though of building a replica of Suhaili, but has now bought the Lello 34 Double Helix in South Africa. He is refitting her I Cape Town.

Mark John Sinclair (58). Sinclair is passionate about sailing. In 1984, he completed two solo crossings of the Tasman and nowadays is often found sailing his S&S 41 Starwave single-handed around remote areas of Australia’s coastline. Mark was 10 years old when Sir Robin Knox-Johnston became the first to complete a non-stop solo circumnavigation. When he found out about the 2018 GGR, he applied immediately and purchased the Lello 34 class yacht Coconut.

Coconut is a strong, seaworthy Lello 34 class yacht with a narrow beam and a traditional long keel. She was built in Durban, South Africa in 1981.

Long before Sinclair acquired her, Coconut had already circumnavigated the globe once combining a cruise in the Mediterranean and through the Pacific Islands before returning to South Africa. When Sinclair saw a Youtube video of her sailing in the Roaring 40s from Africa to Adelaide he was so impressed that he purchased her for his entry in the 2018 GGR.