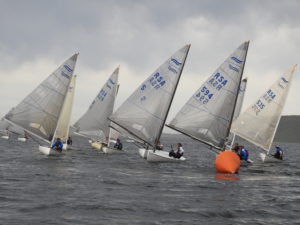 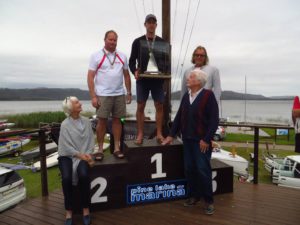 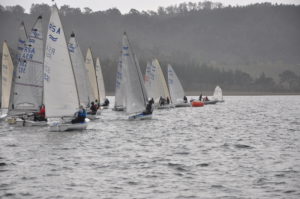 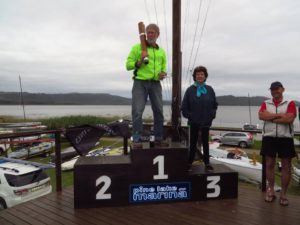 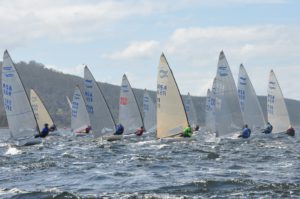 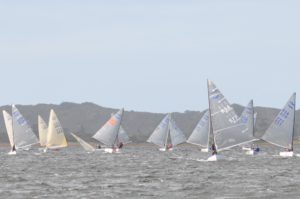 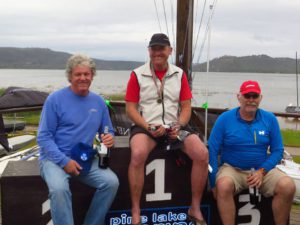 Swartvlei Lagoon in the Southern Cape proved to be a successful choice of venue for the 2017 Finn National Championships – it attracted a fleet of 33 boats. These came from Cape Town, Port Elizabeth, Knysna and Gauteng. The resort of Pine Lake Marina was made available as the regatta centre.

Ten races were completed in the four days of the event. Three races were sailed on Friday afternoon in a strong and switchy south wester that proved challenging for many, and the rescue boats were kept busy. On Saturday, the wind switched to south east and soon built to over 15 knots. Race Officer Ronnie Baer fitted in three good races. The AGM was held after racing followed by a Finn Braai at Greg Davis’ house in Belvidere.

On Sunday, the wind was very light. A light breeze filled in at lunch time and the fleet was sent out. A race was started, but abandoned a while later when it died and never came up again. Monday was the last day of the regatta and a south wester returned. Four windward/leeward races were sailed starting in light conditions and ending in almost 20 knots.

The star of the event was Gareth Blankenberg – he won the first five races on the trot, before blotting his copy book with an OCS in race 6 and having to be content with two seconds in the final two races. Blankenberg, Paul Allardice, Greg Davis and Morgan Evans were the first four in race one and this sequence proved to be also the final overall standings. Knysna’s David Shilton threatened at one stage in the stronger wind, but could not keep up the momentum. Finn Legend Ali Serritslev showed that he still has the skills as he won race 6. There was tough competition through out the fleet.

The grateful thanks of the Finn Class goes to the sponsors of the event, helping to make it the success it was – Perdeberg Wineries supplying a bottle of wine to all helpers and competitors. Harken, Central Boating, North and Ulman Sails for prizes.