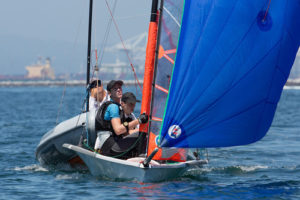 My sailing mentor, a guy by the name of Robin Standing, who crewed for John Sully on FDs way back in the ‘60s, always said, and indeed drummed into our heads, that consistency wins regattas, not just a string of first places.

How true this is, and just looking at the results the dynamic duo of Benji Daniel and Alex Burger have strung together in the first 4 races of the 29er Worlds Gold Fleet (the finals!), they are the epitome of consistency.

3; 3; 2; 4 – are their results after 4 races with their opposition all having a race in double figures. In fact at this point in time, our dynamic duo are the ONLY team to have single digit results.

There’s a ton more racing to come, so there is no room for complacency, nor nerves, as this dynamic duo have so far shown they have the ability and BMT to win the World Championship, or at least be on the podium. They need to be calm, collected and focussed on the job at hand which is to be consistent in their results in every single race from now on.

Here’s how the racing went yesterday.
Despite a half-hour dock hold, before the boats launched this morning, the wind kicked in on this first day of Final Series races, and the competitors dug in, setting the tone for world-class sailing.

The first weather mark saw a parade of athletes proficient in knowledge of their boats and their ability to get the most of out of them. Hard tacks were made with precise steering, and well-executed manoeuvres cleanly launched a colourful array of spinnakers. This was the Gold Fleet; they deserved to be here and just demonstrated why.

Finishing with a 3; 2; 4 on day two, South Africans Benji Daniel/Alex Burger are sticking with their winning game plan and letting it be known that they did not come from halfway around the world not to give it their best.

Principal Race Officer (PRO) Mark Townsend reported that the building wind resulted in seeing racers who had excelled in lighter air fall back, and those more experienced in breezier conditions cross the finish line faster. Race 1 started with a casual 7-9 knots, building to 12-14 for the second, and 16 for the third with gusts to 20.