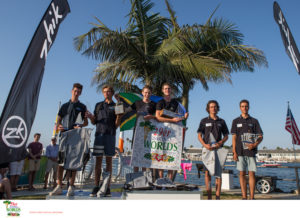 Benji Daniel & Alex Burger led the 29er Worlds for most of the series – finally winning in convincing style.
pic by Matias Capizzano 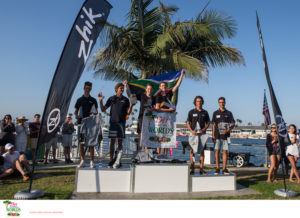 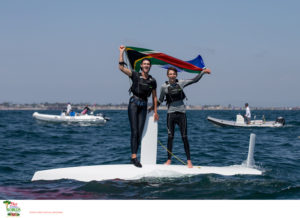 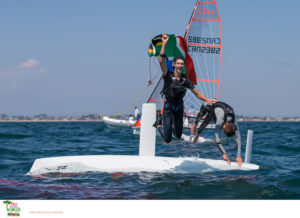 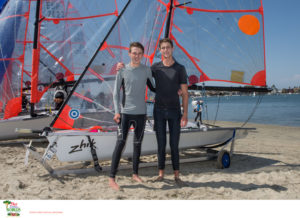 Benji Daniel and Alex Burger are the 29er World Champions. They did not just win this event, they annihilated the rest of the feet to win with 30 points separating them and 2nd place.

They secured victory on the final day with a 3; 33 & 1 to give them the world title after an uncharacteristic bottom-half-of-the-fleet finish in the day’s second race, threatened their success.

Coming into the final day of racing, Daniel said the pair felt confident in their overall ranking; particularly after today’s first race – a third place. ‘So confident, they chose to take a flyer at the start of Race Two.

But their risky manoeuvre didn’t pay off and they finished 33rd. So they didn’t take any chances on the final race, instead, doing what they did best. Sail fast.

At the start, they grabbed the lead and never let go; until Daniel dropped the tiller and slid backward into the water 20 yards beyond the finish line. The two waved in the other competitors and raised the South African flag over their boat, later hoisting it atop the mast, before sailing into the harbor.

“We’ve had worse days,” said Daniel back on the beach. Asked about the last race and he smiled and said, “We wanted to end it in style.” Their nearest competitors were more than double the points behind.

Although the duo has only been sailing together for six months, Burger said other experience helped secure the win. Burger has sailed in other World Championships, and in other boats. He described the 29er as fun and exciting, and said his fellow racers are extremely competitive for a junior fleet. “This is not a kid’s race; it’s physical and it’s competitive.”