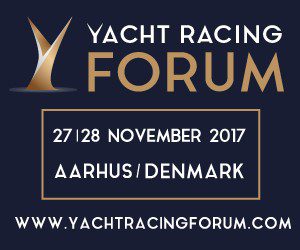 The Yacht Racing Forum is the leading annual conference for the business of sailing and yacht racing.

The sport of sailing has changed dramatically over the five past years: the boats are much faster, the foils sharper, the dangers bigger. Are the sport and its participants aware of this change? Are the classes, event organizers and clubs ready to adapt? What does the sports’ governing body think about it?

The tenth edition of the Yacht Racing Forum, in Aarhus, Denmark (November 27-28) will once again reassemble the sport’s key personalities and actors, including a strong delegation of World Sailing representatives.

This year’s event will include a number of new, exciting features and a world class speaker line-up. The conference and exhibition will address the major challenges in the yacht racing world and reassemble the key players from yacht racing event organisers, sponsors, teams, venues and yacht clubs, agencies and sailors.

Bart’s Bash has joined the Yacht Racing Forum. Tony Bishop and Richard Percy will discuss how a “new, creative approach can contribute to the growth of the sport.”

Kim Andersen
World Sailing President
World Sailing’s President since November 2016, Andersen will present a keynote address whilst other members will contribute to conferences on sustainability, gender equity, racing formats and more. “Those subjects are at the heart of our work”, says World Sailing CEO Andy Hunt. “The Yacht Racing Forum gives us the opportunity to explain our actions and discuss them with some of the sports’ leading influencers.”

Ian Walker
Director of Racing, Royal Yachting Association, UK
Biography: Winner of the Volvo Ocean Race 2014 – 15, Ian Walker (born 25 February 1970 in Worcester, Worcestershire) is one of Britain’s most successful sailors, with two Olympic silver medals to his name. Walker also coached Shirley Robertson and her Yngling Team to gold at the 2004 Athens Olympics. He is a member of Itchenor Sailing Club.

At the 1996 Summer Olympics in Atlanta, Walker received the silver medal in the 470 class along with his sailing partner, John Merricks. At the 1996 470-European-Sailing-Championship he won with his Partner John Merriks the bronze medal.

In 1999, Walker began sailing with Mark Covell. At the 2000 Summer Olympics in Sydney, Walker and Covell won the silver medal in the Star class.

When Britain launched its first bid for the America’s Cup for 14 years in 2000, Walker was named as the skipper. Then, in the 2007 America’s Cup he joined fellow Olympic medallist Iain Percy as the tactician of the Italian team +39 Challenge. His America’s Cup commitments were combined with the highly successful TP52 campaign as skipper of ‘Patches’, owned by Eamon Conneely.

Tony Bishop
Founder of Bart’s Bash
Biography: Tony is the founder of Bart’s Bash, the global sailing event raising funds for the Andrew Simpson Foundation and verified by Guinness World Records as ‘The Largest Sailing Race in the World’. Bart’s Bash is the day when we especially remember and race in memory of Andrew ‘Bart’ Simpson, the double Olympic medallist who tragically lost his life whilst training for the Americas Cup in 2013.

Since its launch in 2014 more than 800 venues, 54,000 sailors across 62 countries have participated, these figures calculated before this year’s event due to be held on 16th, 17th September. Bart’s Bash is open to all sailing clubs, yacht clubs, scout groups, sea cadets, windsurfing clubs, individuals and any venue globally that can host a sailing race and is inspired to take part in this very special weekend.

Following a 25-year career in the fitness industry Tony joined Queen Mary Sailing Club as Club Secretary in 2012, a sailing venue located on London’s largest patch of water just below Heathrow airport. The club introduces and develops hundreds of sailors every year though their large sailing school. It also supports an impressive racing calendar including the iconic ‘The Bloody Mary’ annual pursuit race.

Mark Turner (by videoconference)
Volvo Ocean Race
Biography: Mark Turner was appointed Volvo Ocean Race CEO in June 2016. The Briton, who competed in offshore sailing’s leading international event as a sailor in 1989, and also masterminded the Dongfeng Race Team project in the 2014-15 edition, took up the post after 23 years at the helm of global sports marketing company, OC Sport.

Turner has competed in many of the sport’s leading events including the Transat Jacques Vabre and the solo Mini Transat. He managed Briton Ellen MacArthur’s successful Vendée Globe race in 2001 when she finished second and her record-breaking solo circumnavigation of the world in 2005. Turner went on to launch the very successful Extreme Sailing Series as well as many other leading adventure sports events.

Turner’s sporting vision and business acumen is set to contribute greatly to the future of the Volvo Ocean Race that has one of the most significant global footprint in both media and business-to-business terms, and a fascinating history dating back to 1973. The commitment to the numerous stakeholders, Volvo and the other team and event partners, and also to the sport of sailing in general, is at the forefront of Turner’s commitment.