What the World Has Been Waiting For! Emirates Team New Zealand Launch Their First AC75 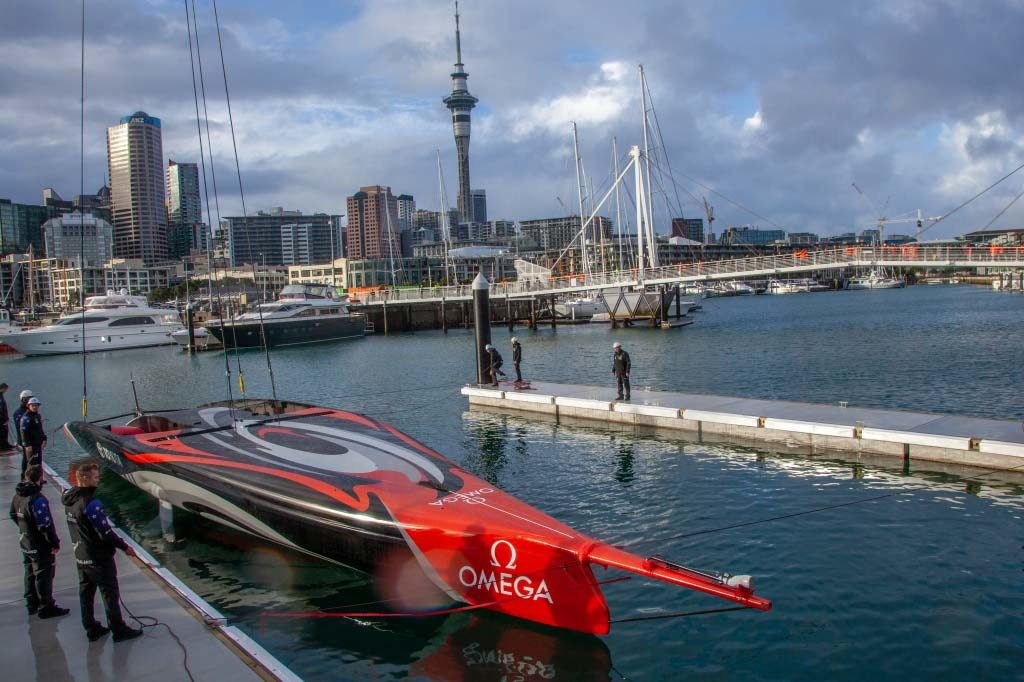 Emirates Team New Zealand has christened their first AC75 at their team base in the heart of the America’s Cup village in Auckland.

The significant milestone was celebrated with the team, their families, sponsors and suppliers. The boat was christened “Te Aihe” (Dolphin) by Marcus Gerbich – member of the MND Foundation – and blessed by Ngati Whatua.

Emirates Team New Zealand COO Kevin Shoebridge, who has overseen the development and launch of plenty of boats over the years, was especially proud to be witnessing the Kiwi AC75 emerge for the first time.

“This is a significant occasion for the team, not just because it is another new boat, but really because when we won the America’s Cup in 2017 we very quickly had to come up with a new concept of boat that would really continue to push the boundaries of innovation and technology in the America’s Cup. So in the relatively short time frame since November in 2017 when we published the concept, to seeing it in the flesh today is an amazing testament to the entire team willing to push things all the way from concept to design to build and fit out” said Shoebridge.

It has taken over 100,000 man-hours to design and build the boat with a group of about 65 people between designers and boat builders who have been working quietly throughout the past year. Sean Regan has led the set up of the team’s bespoke production facility on Auckland’s North Shore from a blank factory floor to producing the first AC75.

“We have had the pressure on since the moment we decided to establish our own production facility very early on in this campaign. We have built up a really great team of 42 fully committed people at the yard who have been working full-on to get this boat out the door,” said Regan. 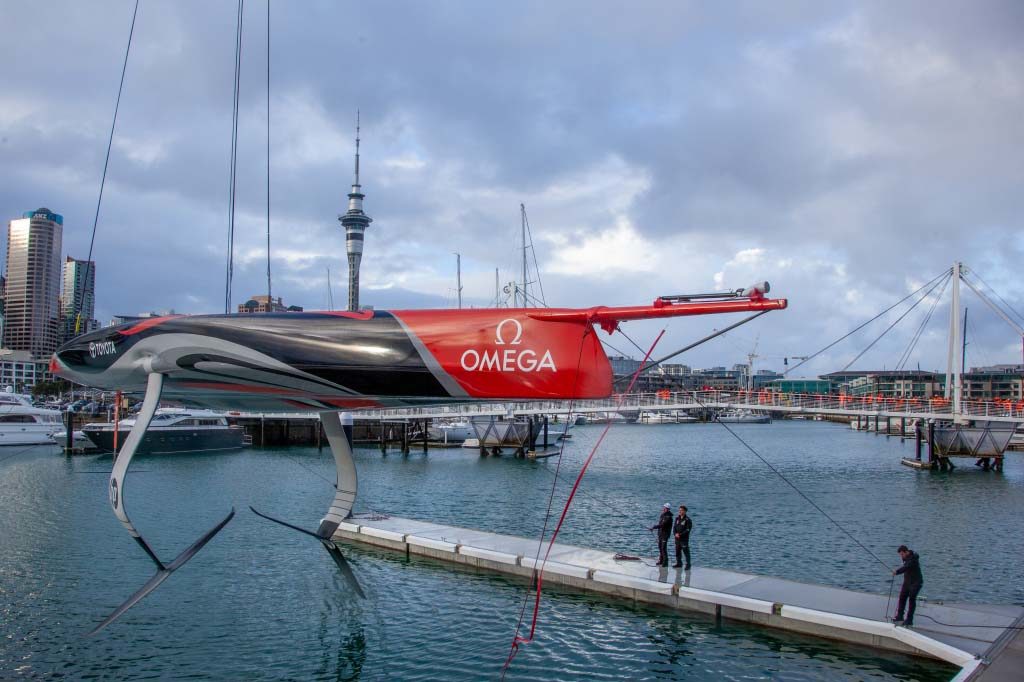 “Even for the most experienced boat builders on the team, this has been a very unique build because it is such a sophisticated boat. But it is really encouraging that for a number of our junior and apprentice boat builders their first build has been on a boat that is really on the cutting edge of complexity in build, design and performance.”

“There’s a huge amount of innovation in the design and build of the AC75 – more than we saw in the AC50’s in Bermuda” said Bernasconi. “The AC75 is a completely new concept and has presented plenty of challenges across many areas – but this is precisely what the Rule was designed to do – to push development to the extreme. We haven’t been conservative in any aspect of our design; it’s not long until we need to commit to the design of our second boat, which we will ultimately race in the 2021 America’s Cup, so we need to test as many of our ideas as possible in the yacht we’re launching today.” 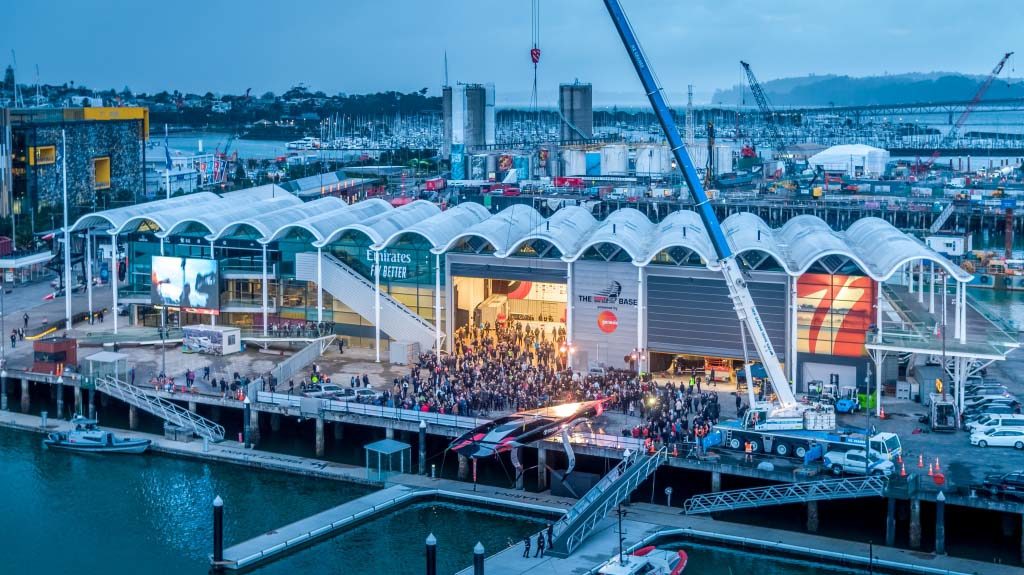 Unlike the other main Challengers, Emirates Team New Zealand has focussed the development of their first boat entirely with their in-house simulator as opposed to building a smaller scale test boat to validate concepts on the water. So once the AC75 goes for its maiden sail, it will be the first time the team has collectively sailed since winning the America’s Cup on June 26th 2017.

“It won’t be without nerves the first time we go sailing, but I am sure that is no different for all of the teams.” said Glenn Ashby

“The AC75’s are big powerful and fast boats so they will be a handful, but from our understanding through our simulations they are inherently a safer boat to sail than what we have sailed in the past two America’s Cups. As with any new boat it is all about slowly getting it up to speed, learning how to sail it most efficiently, pushing the development of the designs and then putting in the hours in getting ready to race for the ACWS Sardinia in April 2020.”

Emirates Team New Zealand will now focus on a busy period of testing on Auckland’s Hauraki Gulf over the spring and summer months having the advantage of developing and training on the race area of the America’s Cup Match which will be raced in March 2021.

Emirates Team New Zealand CEO Grant Dalton concluded: “I wish to thank every single team member for the hard work they’ve done to get us to this day. A special thanks also to all our sponsors and partners for all of their valued support so far and everything they will continue to do during our journey towards the America’s Cup Match in 2021. It is an exciting time, but things are about to get a whole lot more so from now.” About the Name
The name Te Aihe (Dolphin) is based on the whakatauki (proverb):
“Mā te Aihe e tuitui ai I te ngaru moana, mā te Rangatira e tuitui ai I te tangata”.
“As the dolphin sows through the seas so does a leader sew people together”.

Using Technology to Set Precedence
The AC75 Class is a 75 foot, high performance monohull governed by the AC75 Class Rule which was published on 29 March 2018. The Class Rule is open enough to guarantee a wide margin of freedom to the designers but introduces certain one-design elements for cost containment also.

The AC75 supplied parts – identical for all the teams – are the foil arms, the foil cant system and the rigging. The shape and base laminate of the mast is also controlled by the Class Rule.

The AC75 rotating mast is a 26.5 metre long one-design ‘D’ shaped section that weighs about 300kg and serves as the leading edge of the double skinned mainsail.

Emirates Team New Zealand’s mast has been built at Southern Spars in Auckland whereas the rigging package was built at Future Fibres in Valencia.

The two other one-design components are key to make the boat fly.

The foil arms, built at Persico Marine in Italy, are the result of a project led by Luna Rossa Challenge with the collaboration of all the America’s Cup teams and New Zealand based composite engineering consultancy Pure Design and Engineering.

Each 4.5 metre long carbon foil arm has a wing attached to its tip. The foil wings are custom designed and built by each team.

Driving the foil arms is the electronic and hydraulic foil cant system (FCS), another one design supplied part, which moves the arms and wings in and out of the water. The foil cant system was designed by Emirates Team New Zealand and assembled in Auckland before being distributed to all teams earlier in the year.

The rest of the Class Rule is open and being a new concept, leaves the design quite open as no proven path has yet been defined for these types of boats. Any shrouding of the yachts in the 36th America’s Cup is prohibited so teams won’t be able to hide their different design approaches and subsequent developments.

The most visible differences will be seen in the hull shapes and deck layouts. Despite a number of basic constraints such as the length, the hull shape has few significant limits on ¬shape or structure. Design teams will be looking for a shape with minimal drag in light-wind displacement mode while also addressing the stability required to generate thrust for take off.

Evident differences will be displayed also in the foil wings and wing flaps as they are also open to design and, being T-style foils, their shapes have been less explored than the L- foils used in the last two Cups.

The double-surface mainsail – a new innovation of the 36th America’s Cup Class Rule – will be key in the performance of the boat and a lot of hours have been invested in its design.

The hydraulic and electronic control systems, powered and controlled by the crew, operate key components of the boat such as the foils and they have been subjected to important developments as well but will they remain a very guarded secret by each team.