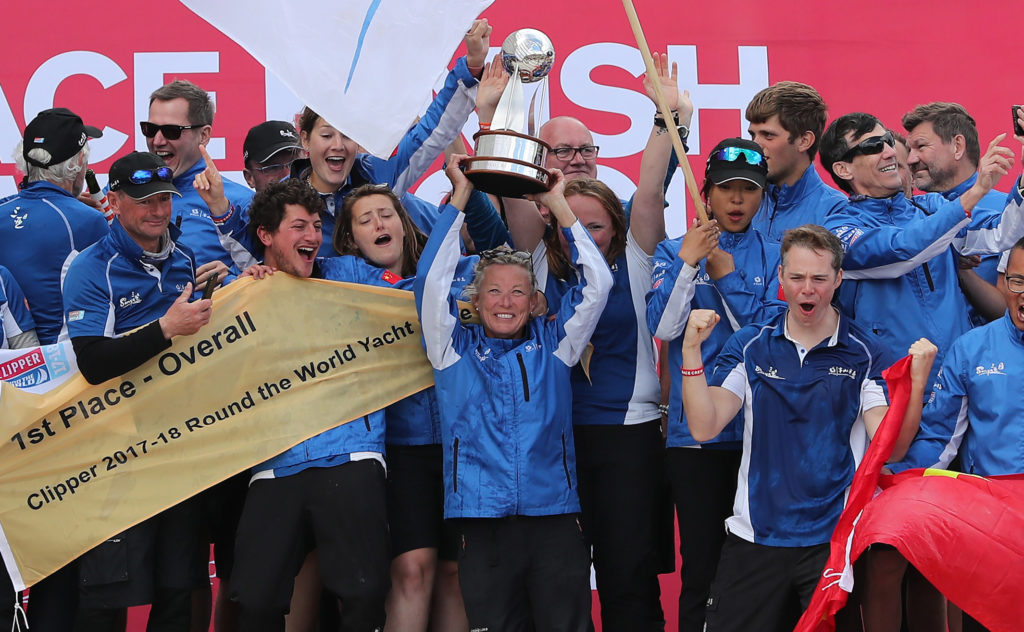 Wendy Tuck and her winning crew.

The Clipper Race Made history in Liverpool on the weekend when Australian sailor, Wendy Tuck, became the first ever woman to win a round the world yacht race after leading her Sanya Serenity Coast team to overall victory in the Clipper 2017-18 Race.

Thousands of people from around the globe flocked to the banks of the River Mersey to watch the spectacular Race Finish Sprint. After an intense 18 nautical mile duel, it was Garmin, PSP Logistics and home team Liverpool 2018 that picked up the final bonus race points in front of Royal Albert Dock Liverpool.

Despite the sprint positions, it was Sanya Serenity Coast that managed to hold the overall lead and in an additional win for women’s sport, second place overall went to British Sailor Skipper Nikki Henderson, 25, the Skipper of Visit Seattle.

Sanya Serenity Coast Skipper Wendy, 53, from Sydney, said: “I can’t believe it. It hasn’t really sunk in really but I am just so happy. It is so, so special.

“I don’t think it’s about being a woman. It’s just do what I do. But I am very proud and even prouder of my team. They are the ones that did all the work and considering many had never sailed before, what they have accomplished is incredible.”

Visit Seattle Skipper Nikki Henderson said: “Congratulations to Wendy and her team – you were just too quick for us!

“We didn’t get the win, but I am so proud of how my team dug deep and kept fighting right until the end. No matter how hard it got, they turned up on deck ready to work and deserve every bit of this success in coming second.”

One of the biggest cheers of the day went to home team Liverpool 2018. The bright pink team entry, which has been flying the flag for the city as it raced around the globe, returned to its home port to a hero’s welcome after double podium success in Race 13, where it finished second, and the Sprint Finish, where it took third place.

On arrival, Liverpool 2018 Skipper Lance Shepherd said: “It has just been an incredible journey, I am so honoured to have been Skipper of the Liverpool 2018 team and I am so proud of the team for everything they have achieved.”

The arrival of the Clipper Race Fleet into Liverpool was followed by a public prize giving hosted by radio presenter Leanne Campbell in front of a jubilant crowd on the steps of the Museum of Liverpool where each team’s achievements were celebrated for one final time.

In total, 712 people representing 41 different nationalities and from all walks of life have taken part in the 40,000 nautical mile Clipper 2017-18 Race, the event’s eleventh edition.