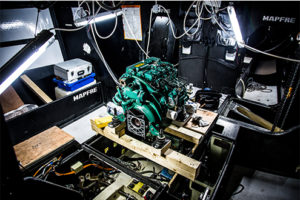 Each Volvo Ocean 65 boat in the race is equipped with a robust Volvo Penta D2-75 engine. As the heart of the yacht, the D2-75 engine provides on board power throughout the race, under the toughest of conditions.

The seven participating teams will circumnavigate the globe for nearly nine months, in arduous conditions and all weathers. The racing boats and engines are the same as for the 2014-15 race, but this time they will need to cover an extra 7,000 nautical miles, thanks to a change in the route.

“The main stress to the engines comes from the enormous G-forces induced by the very high speeds and violent motions of these race boats,” says Jan Dahlsten, manager of technical support and product delivery to Volvo Ocean Race. “These forces sometimes correspond to those that military aircraft are exposed to. This is far above what sailboats and engines normally have to cope with.”

Ultimate Test of Man Versus Nature
The Volvo Ocean Race is known as one of the world’s toughest sporting competitions. It is regarded by many as the ultimate test of man-versus-nature. Physical and mental endurance, teamwork, and sophisticated engineering all have to unite successfully in order to utilize and overcome the powerful forces of the elements. The teams will cover 45,000 nautical miles to complete the race.

“When racing at sea, the boats go to extremely remote places where there is no help available – to places where even helicopters cannot reach – so it’s paramount that the engine is completely reliable,” says Dahlsten. “When they are in the middle of the Southern Ocean, the closest object to them is the International Space Station, so the crews have to have absolute confidence in the engine. The engine is certainly at the heart of the yacht, and is integral to this incredible adventure.” 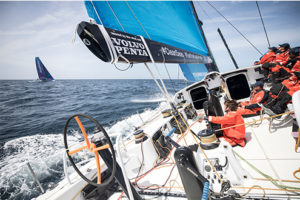 The Volvo Ocean 65 vessels often operate at high speeds, where precision maneuverability is critical in all conditions.
pic by Volvo Ocean Race. 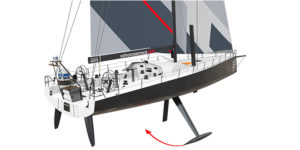 The canting keel is driven by two hydraulic cylinders that use electricity supplied by the Volvo Penta D2-75 engine.
pic by Volvo Ocean Race 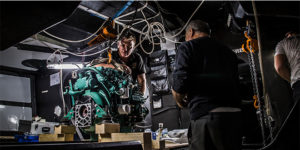 A Volvo Penta’s D2-75 engine is serviced in one of the Volvo Ocean 65 yachts.

Precision Manoeuverability
The 66ft (20.37m) Volvo Ocean 65 has a weight of 12.5 tons, a rig height of 99.4ft (30.3m), and water ballast of 1,900 litres. The boats often operate at high speeds, where precision Manoeuverability is critical in all conditions. This is the sixth time that Volvo Penta has supplied engines to the Volvo Ocean Race, and the D2-75 with Saildrive was again selected to power the vessels for the 2017-18 edition, because it combines high performance, a compact design, and, above all, reliability.

It provides both propulsion and auxiliary power: Propulsion is needed to manoeuver the boats in and out of harbors, for transportation between venues when there is no wind, and, most importantly, for emergencies; while auxiliary power is needed for all onboard electrical requirements, including the communication equipment, computers, lights, heating, hydraulic system that operates the canting keel, and for the ‘water-maker’ that converts salt water into safe drinking water for the crew.

The canting keel is made of a high-strength steel alloy fin and a 3.5 tonnes lead bulb at the end, hinged on the bottom of the hull with a lever into the boat and two large hydraulic cylinders that operate it. It swings sideways +/-40 degrees to increase the stability of the boat.

“The Keel Hydraulic system uses a lot of power,” says Dahlsten. “And the canting keel stabilizes the boat enormously, so it can carry a bigger sail and race a lot faster. The power of the D2-75 makes for fast movements of the keel in the intense In-Port races.”

Dee Caffari is the skipper of one of the seven teams competing, called Turn the Tide on Plastic. “These boats are harnessing the power of nature, but to keep all the systems running you need power, and you need energy. You need the reliability in the harshest of conditions and the Volvo Penta engine is key to that. That indestructible machine will keep going no matter what.”

“This engine is proven to be strong, robust and very reliable,” says Alexandra Range, product manager for the D1 and D2 engine range at Volvo Penta.

“It provides enough power at low rpm for normal propulsion, and so it gives spare capacity to power extra alternators, if necessary. The sailboats it’s usually installed in, of 45-55 feet, use a lot of electrical equipment for onboard comfort, such as TVs, air conditioning, and cooking, and the D2-75 is well suited to deliver the electrical power needed. “If it can be used in extreme conditions for the Volvo Ocean Race, then customers in normal sea conditions can be certain that it will work well for them.”