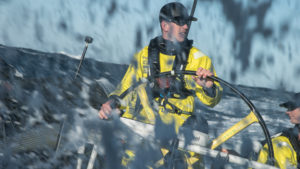 Yesterday the big question was whether ‘west was best’?

Will they ‘follow the leader’ or will there be someone brave enough, or stupid enough, to make a break in an attempt to cut the corner? Time will tell when the next set of position reports come in. 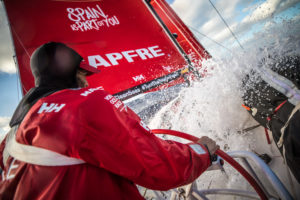 On board MAPFRE.
pic by Ugo Fonolla/Volvo Ocean Race

MAPFRE had a clear plan. “We’re planning another gybe to the west to take advantage of the shifts,” explained Juan Vila, the navigator on MAPFRE as his boat charged south.

And soon enough, the Spanish team made the right turn and was the second furthest to the west. Only Dongfeng had hit the west more aggressively.

“There’s a massive, multi-hundred mile long wind shadow behind Madeira so we don’t want to end up downwind of it,” explained Turn the Tide on Plastic skipper Dee Caffari.

“And if we go further south, towards the Canary Islands, there’s a potential low pressure system that could be trouble. All routing has us headed west of Madeira.”

On Vestas they appeared to be hedging their bets. “We’re keeping our options open,” said Simon Fisher, navigator for Vestas 11th Hour Racing. “We saw MAPFRE a little earlier and Dongfeng as well and we know they appear to be going west… Big picture, the idea is to get west being mindful that it is a 20-day leg, and we want to keep tabs on the fleet so some of this is fleet management as well as weather, so we’ll be watching the next few skeds closely.” 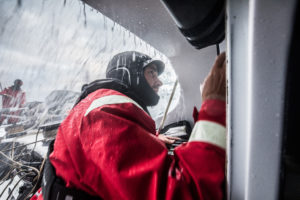 Sam Greenfield, reporting from Turn the Tide on Plastic filed this report. “Saw some crazy things today. A wave threw Bianca off the stack and into the cockpit while she was clipped in. So much water that her PFD inflated. There she was trapped on her back in the cockpit, stuck by her tether taking hundreds of gallons of water to the face. It was scary to watch. Liz got to her quickly and sorted her out.

“I don’t know how they do it on deck in these conditions. When I got down after shooting my mouth was full of salt and my hands were shaking too much to type. I don’t have words to describe the caliber of people I’m surrounded by on this boat.”

Options Abound After Madeira
Last night was another fast night at sea. Abby Ehler on Team Brunel says the past 24 hours has been a gybe-athon, with the teams taking it by turns to make progress south and then west.

And this is how her skipper, Bouwe Bekking described it: 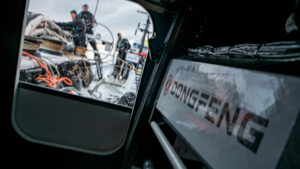 It’s pretty we and miserable aboard Dongfeng.
pic by Jeremie Lecaudey/Volvo Ocean Race

“Good routines now with the jibing, moving all the stack downstairs followed by the sails on deck. And now and then seeing another competitor is always good for the moral. Currently 27 knots of breeze and leaving the island of Madeira quickly behind. Will be interesting to see how the next position report is going to be, as we placed ourselves closely to the northwest part of the island, to use the extra wind compression. the next 24 hour we will have to make a call on how far west we go, before we finally make our turn south, one very critical point on this leg.”

There are a couple of different options according to the weather models, so it could be an interesting day to see whether someone makes a break away from the rest of the fleet.

“Now the goal is to go west and find the good gybing point and choose where we would like to cross the doldrums,” writes Charles Caudrelier on Dongfeng. “Not easy now that the game is completely open in the south Atlantic.”

Dee Caffari, skipper on Turn the Tide on Plastic is looking to the forecast for easing winds as an opportunity to come back into the fleet.

“It seems we can have another 24 hours of this fun sailing before we get some slightly lighter winds. Those in front will get them first allowing us to sail into the back of them, I hope, as we are all too aware that we cannot afford to get left too far behind before the doldrums. He who exits first will gain huge and we will have another case of the rich getting richer.”

With fatigue setting in, decision making and pushing the boat to 100 percent is becoming more and more challenging.

But that’s what ocean racing is all about and why the Volvo Ocean Race is held in such high esteem.