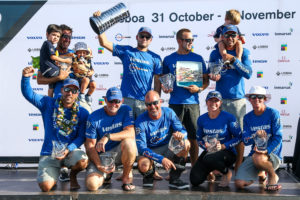 The wind shut down on the final approach, and an early morning lead of 34-nautical miles over second-placed MAPFRE was soon whittled down to 10-miles. The finish line was in sight, but the current in the river was pushing the boat back out to sea in some of the lulls, so much so that the team considered anchoring. 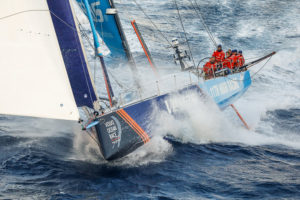 But the crew on the Vestas boat held their nerve, tacking first up and then down, zigzagging towards the line, into agonisingly light headwinds, and finally securing victory with MAPFRE in turn just starting to slow down, still some 9-miles back. 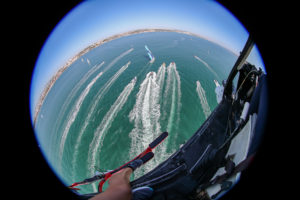 “We have a long way to go certainly, but this was a good way to start,” said skipper Charlie Enright. “SiFi (navigator Simon Fisher) did a great job. He didn’t really make any missteps… But every (results) sked is nerve-wracking, especially when you’re stuck in a river going backwards!

“But we pride ourselves on not getting too high or too low and I think we executed that on this leg… It’s about having confidence in ourselves and committing to the process and now we’re starting to see the results of that.”

Charlie Enright is the third American skipper to win Leg 1 of the Volvo Ocean Race. The others were John Kostecki, on illbruck in 2001-02, and Paul Cayard on EF Language in 1997-98.

Both of those teams went on to an overall victory – so the omens for Charlie Enright are certainly good.

The winners weren’t the only team to have an excruciating finish experience. When MAPFRE was within 1.5 miles of the line, they too ran out of wind and had to watch Dongfeng Race Team rush into the river behind them. With only a small lead as a buffer, the tension for Spanish fans was rising fast. 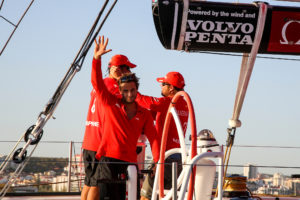 But as Vestas did before them, the MAPFRE crew found a little zephyr of wind to finish 15-minutes ahead of the Chinese team.

“Very pleased with the result. It’s a solid start, exactly what we wanted. We’re very happy,” said Xabi Fernández, the skipper of MAPFRE immediately after finishing. “We have to say Vestas did very well early on and we didn’t see them again… But then we had a strong 12-hours after Gibraltar and we stepped it up there.”

The experience and desire of the MAPFRE crew was on full display in the 30+ knot winds they had pushing out of the Mediterranean on the second night. Fernández and his team put in more manoeuvres than the rest of fleet to stay in a narrow band of strong winds and emerged from the experience in the second place slot they would never relinquish.

Dongfeng Racing Team skipper Charles Caudrelier made an excellent recovery on Leg 1, needing to scratch and claw for every inch, after falling to the back of the fleet on the approach to Gibraltar. And fight they did, slowly reeling in the fleet and finally recovering to pass team AkzoNobel with only 220 miles to go, to complete the podium.

“It was very difficult and complicated,” Caudrelier said. “The weather was often different from the forecast so that was interesting.”

Third place on the 1,650-nautical mile leg from Alicante to Lisbon may not have been what Charles Caudrelier’s Dongfeng had in mind when he started the leg.

But given that the boat had slipped to seventh and last place at one point during the early stages of a leg that saw everything from 30 knots to flat calms, getting up to finish on the podium behind leg winner Vestas 11th Hour Racing and second-placed MAPFRE, was a good result.

An exhausted but happy Caudrelier congratulated his team on what he called a “good effort” minutes after Dongfeng docked at the official Race Village in the Portuguese capital.

The Frenchman revealed that he and his crew had to contend with a series of setbacks including two collisions. “We had a very good start and a very good first afternoon with good speed, but we hit something at the end of that day and after that we had a big problem with the speed,” he said.

“Everybody came back on us and passed us on the left and the right. We were quite slow and after that we started to make bad decisions because when you are slow it does not always make you clever.”

Caudrelier added that in the critical hours after exiting the Gibraltar Strait Dongfeng had another collision, this time with a big fish which required the crew to back the boat up to free it from the keel.

Bowman Jack Bouttell said it had been an exhausting race. “It was a hard leg with a lot of sail changes and a lot of manoeuvres,” he said. “The last couple of days it was changing sails every few hours and interrupted sleep which is pretty hard work.”

He revealed that early in the leg a fitting ripped out of the foredeck, requiring running repairs to stop an ingress of water. “We basically ripped one of the deck fittings out of the deck lines, so we had a hole of about 10 millimetres. When we were going downwind quite fast there was a lot of water coming into the boat so we temporarily patched it and then repaired it the next day when we had light winds. It was all good in the end with a nice repair,” he said.

The French Vendee Globe star Jeremie Beyou enjoyed his first proper racing in the Volvo Ocean Race and noticed the intensity with which he and his colleagues sailed at all hours of the day and night.

“It is very different to the Vendee Globe,” he said. “In that race you manage yourself throughout the race and you know you can’t be 100% all of the time so you try to push when you need to but know that sometimes you need to go a bit slower. In the Volvo Ocean Race it is 100% all of the time and if you do not perform at that level then you will lose metres and then you lose places.

“Maybe at the beginning of the race we weren’t 100% and the other boats were,” he added. “We came out of the Mediterranean last but even then nobody gave up and every trimmer and every driver did a very good job to make the boat go fast. Metre after metre we gained one place, then two places then three places and finished third which I think is good when you see where we were earlier in the race.”

Team Brunel finished sixth in the first Leg of the Volvo Ocean Race. Until the finish line it was a tight battle with Turn the Tide on Plastic. But Team Brunel managed to keep them behind.

Race veteran Bouwe Bekking is disappointed with the result. “The synergy within the team is good. But the result is very frustrating. We really missed speed, especially in the second part of the leg. At the moment we don’t know what the problem is. But the race is still long, the team is good and we’re focussed on getting the boat back in shape.”

Under 30, Carlo Huisman said: The first Leg went alright, but it’s a bummer that we couldn’t get the speed to catch up with the rest of the fleet. We did race through the Strait of Gibraltar with 30 knots! That was awesome! The first Leg in the Volvo Ocean Race was a great experience.

Peter Burling: It was a tough one. It was good fun. We did a lot of things really well. It was a struggle to find the speed. That’s a bit of a shame. Luckily we managed to beat Turn the Tide. It was a tough leg though, but we will be back!