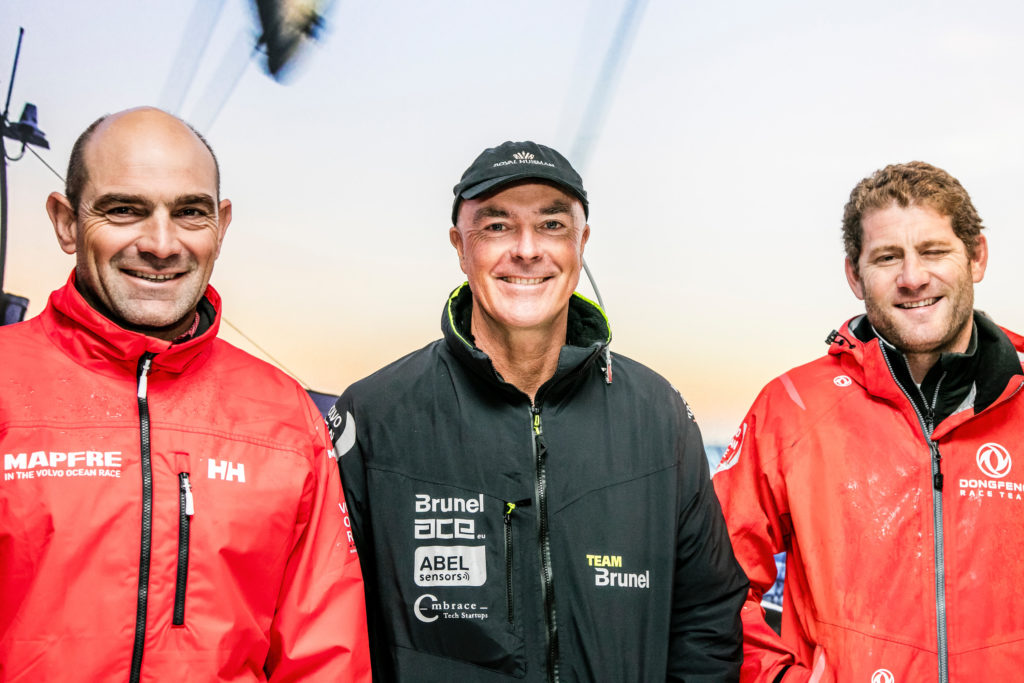 Three teams will start Leg 11 in a few hours time – the final 700 nautical mile sprint leg of the Volvo Ocean Race – in a virtual tie for the lead, setting up an epic, dramatic and unprecedented denouement.

After racing over 44,000 nautical miles around the world, two teams now sit tied at the top of the overall leader board on 65 points – MAPFRE and Team Brunel – with Dongfeng Race Team currently just one point behind them on 64.

However, if Dongfeng beats the other two in Leg 11, it means they will also be positioned to receive the bonus point for the shortest elapsed time around the world. This has effectively created a three-way tie that will only be settled by the result of this final leg.

The race around the world will now be decided by a 700-mile sprint around Denmark. Never in the 45-year history of the race has the competition been so close heading into the final leg.

There Can Only Be One Winner
“It’s amazing to see three boats on the same points,” said Charles Caudrelier, skipper of Dongfeng Race Team during the press conference on Wednesday. “I think one of these three teams deserve to win the race. Now it’s up to us to push harder to be ahead of these guys in The Hague. We know it’s going to be a big fight, it’s good for the race and we’re excited and ready to go.”

Xabi Fernández, the skipper of MAPFRE, has led the race for more stages than any other team. Now he’s pushing to bring victory to Spain for the first time in the history of the race.

“We are in an amazing situation now, we have three boats, equal points, one leg to go. I am very happy to be among these three boats and fighting,” Fernández said. “But we know that only one will win. We have one mission, we have to beat them.”

Bouwe Bekking’s Team Brunel has already made a tremendous comeback from being in sixth place in Auckland to now having the overall title within their reach, if only they can keep up their recent form.

“We’re in the flow,” Bekking said, brimming with confidence. “If you look at the leader board, we’re going faster on every leg. Last leg we found some new gears and I think that’s a good thing. And I think we have ended up with a team that we’re really happy with. Last but not least, I’m sailing in my home waters. I’ve lived in Denmark for more than 25 years. And of course the place where we finish, I’ve grown up over there. We have all the ingredients to win the race.”

Further down the leader board, Dee Caffari’s Turn the Tide on Plastic, has pulled into a position to overhaul David Witt’s SHK/Scallywag, with just one point separating the pair in sixth and seventh place.

“It would be huge to get past them,” she said. “For a team coming in late, with a young, inexperienced crew, everyone had written us off completely. But we’ve been much more competitive than everyone thought we would be in our sailing, and to not finish at the bottom would be the cherry on the cake for our team. It would be a huge achievement and I’d be very proud of them. But he (David) isn’t going to let us get it easily – I know that!!”

For Vestas 11th Hour Racing skipper Charlie Enright, his position on the leader board is locked in with a fifth place finish overall, not where he’d wanted to have finished after winning the first leg.

“Had things bounced a different way maybe we’d be talking about four boats at the top,” Enright said. “But we are where we are. We’ve grown stronger as a group and I probably have grown as an individual as well, given the adversity we’ve faced. I’ve learned a lot… I’m proud of our team and everything we’ve accomplished on the water in the face of adversity.”

The final leg brings the fleet into The Hague and with two Dutch skippers in the race, the reception is expected to be epic.

“What we can expect in The Hague is something we’ve never seen before in the race, even going back to the Whitbread,” said team AkzoNobel’s Simeon Tienpont. “There might be up to one-million visitors expected in that week and I think that shows what kind of event this is in the sporting world and especially in The Netherlands.”