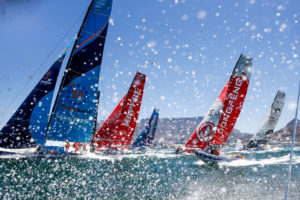 As an indication of things to come for the Volvo Ocean Race fleet, and a real time indication for the landlubbers in Cape Town, the famous ‘Cape Doctor’ did its thing on the weekend with steady 40 knots of winds on Saturday gusting up to 20 knots more. As a result the race village had to be closed for safety reasons.

By Sunday the wind had moderated slightly getting the fleet off in winds of 25-plus knots.

“It’s going to be full-on for the start,” said Vestas 11th Hour Racing navigator Simon Fisher. “Very strong south easterlies and then when we get offshore it will be a decent sea-state we’re banging into as well. It will soften a bit but then we’re quickly into the westerlies and it’s the proper Southern Ocean. It’s going to be an intense leg in general.” 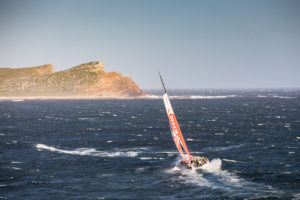 The start was spectacular, not only due to the performance of the boats, but also due to the large fleet of spectator boats seeing the fleet off.

There were “oohs and aahs” aplenty aboard the VIP boat full of landlubbers that I was on as Dongfeng and MAPFRE took and early lead and reached past the spectator fleet at full speed towards the light wind transition zone before picking up the breeze again and hot-footing it towards Cape Point. 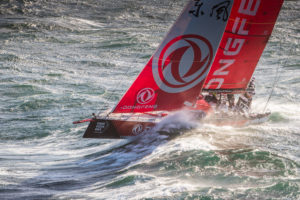 It was just the thing the landlubbers wanted to see, and they got plenty of it.

This is a tough leg as it takes in the Southern Ocean where temperatures plummet and the pressure of the wind is at its highest due to the cold conditions. Plus it’s an area where the seas are unhindered by any land mass, so the swells build up significantly. Despite all this it’s what the competitors are looking for and the conditions they thrive on.

Leg 3, from Cape Town to Melbourne, Australia is 6,500 nautical miles. The routing takes the teams down into the ‘Roaring Forties’, the area south of 40-degrees latitude where storm systems circle Antarctica, unimpeded by any land mass. Towering waves, steady gale and storm force winds, and ice-cold temperatures are a daily feature here.

“It could be very windy for the first week and very high speed,” agreed Charles Caudrelier, skipper of Dongfeng Race Team. “I think it’s going to be a fantastic leg.”

“We should remember it’s late spring, just the beginning of summer and the winter has just passed in the Southern Hemisphere so the water is still bloody cold,” said race veteran Bouwe Bekking, the skipper of Team Brunel.

“I think the most frightening thing is that the depressions are still so strong… the amount of pressure that is in the air is just humongous. And of course, the water temperatures – hopefully with the ice limits we don’t encounter any ice – but if the water is just a few degrees above freezing and you get a southerly breeze, you might be having icicles off the mast some times. We’ve experienced it in the past… When we did this leg in the old days, this was the leg when the most damage appeared. The boats today are stronger than before, but still things can break.” 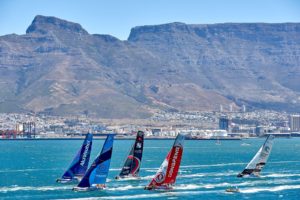 The start off Cape Town.
pic by Thierry Martinez/team AkzoNobel

Deciding when to push for speed and when to throttle back to protect crew and equipment is a delicate balance. The stakes are even higher as this is the first double-point leg.

“I think we have a lot of experience on our boat and we have to trust that experience in the Southern Ocean,” explained Charlie Enright, skipper of Vestas 11th Hour Racing talking about finding the balance of how hard to push. “It not just about the points, it’s the fact we don’t haul-out in Melbourne, it’s the heavy conditions in the Southern Ocean, because you don’t want to break anything…To finish first, you must first finish.”

For Xabi Fernández, the skipper of MAPFRE, the race leader, the stopover in Cape Town provided a much needed opportunity to recharge.

Already 120nm from the start and doing a modest 11-plus knots of boat speed, the fleet is using this opportunity to get back into synch for the heavy conditions that should reach them in the next few days. Leading the charge (as of the 03h00 positions this morning) across the Indian Ocean is MAPFRE followed by Brunel and Dongfeng.

Regular coverage will follow this report as the action will hot up considerably as the temperatures plummet.

Race Control: Safety First
Safety on the open ocean is a primary concern of the Volvo Ocean Race team. We spoke to Race Expert, Rick Tomlinson at Race Control in Alicante about how the team use B&G technology to keep a close eye on the sailors.