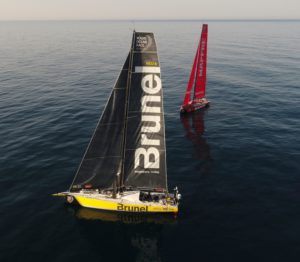 On board Brunel.
pic by Rich Edwards/Volvo Ocean Race

The images of Volvo Ocean Race boats in near calm conditions during the first 24-hours of the Prologue leg from Lisbon to Alicante may give the impression of a relaxing cruise down the coast to the gates of the Mediterranean.

The reality is the contrary. Light, variable conditions are a nightmare for the sailors, who end up agonising over every tack or gybe in search of each little zephyr. Sails are adjusted, course corrections are a constant, and eyes strain at the horizon looking for any sign of a change.

During the first 24 hours of the Prologue, a critical decision faced the teams.

The early returns are decidedly in favour of the coastal route, with MAPFRE and Team Brunel marching out to a 40-plus mile lead over the rest of the fleet who stayed 30 miles further west.

“There was a big choice to make at the end of the night,” explained Jérémie Beyou on Dongfeng Racing Team. “Do you stay offshore like we did, or do you try to escape the light air by the coast?” 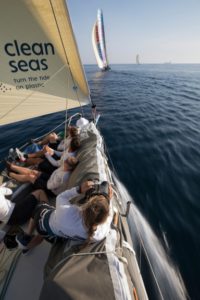 On board Turn the Tide on Plastic.
pic by Sam Greenfield/Volvo Ocean Race

But the entire fleet now needs to navigate past another big light patch, before finding stronger conditions near Gibraltar.

“It’s going to be a long one,” said a frustrated Liz Wardley from Turn the Tide on Plastic, noting it would normally take about three days to complete the leg.

Her boat was trailing the fleet on the Monday afternoon position report, but making twice the speed of the four boats immediately in front, so there is still plenty of opportunities.