Volvo Ocean Race. Setting Up for A Thrilling Finish 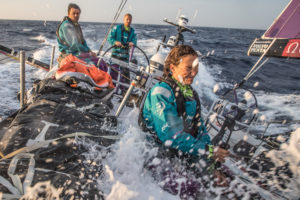 Vestas 11th Hour Racing led the fleet around the Porto Santo North Waypoint during the night, and has increased here lead over second placed MAPFRE to 26.6nm – this despite MAPFRE pulling back a gain of 6.4nm between the 6-hourly position reports. 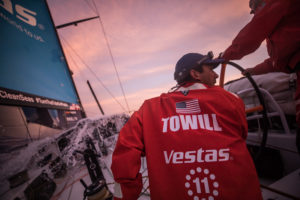 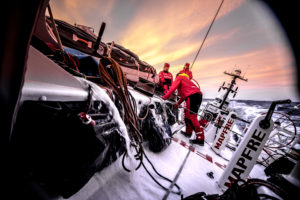 The whole fleet is now around that waypoint and setting course for the finish in Lisbon – and speeds are up as the fleet heads downwind.

Simon Fisher, the navigator on the Vestas boat, said: “It’s about three in the morning I think, and we’re just coming to the rounding (Porto Santos) now. We’ll be going back downwind now and pointing almost at Lisbon.”

The latest position reports and stats on each boat show that the best 24-hour run was put in by Vestas 11th Hour Racing with 262.4nm. Next was Dongfeng with 258.6nm, while MAPFRE could only record 249.9nm.

Vestas 11th Hour Racing, having survived a scare during the night when a ballast tank hose failed, dumping 800 litres of water in the bilge.

“Ironically, I came down here to do some performance analysis because the boat didn’t feel right,” explained skipper Charlie Enright. “When I sat down at the nav station I could here some sloshing around at the back of the boat. And the water ballast hose had let go, so we had 800 litres sloshing around in the bilge. That explained the performance issue!”

“Conditions are pretty nice,” said Rob Greenhalgh on MAPFRE. “20 knots of wind, and making about 20 knots of boatspeed, but everyone has good speeds and good wind now.

Positions in the chasing pack remain in flux. Less than 10 miles separate fourth from seventh place. Every mile gained is hard-earned. Any lapse is punished.

“The subtleties of racing these boats is something we’re still working on,” said Steve Hayles, the navigator on Sun Hung Kai/Scallywag. “At times we’re quick, but at other times, our pace is lacking.