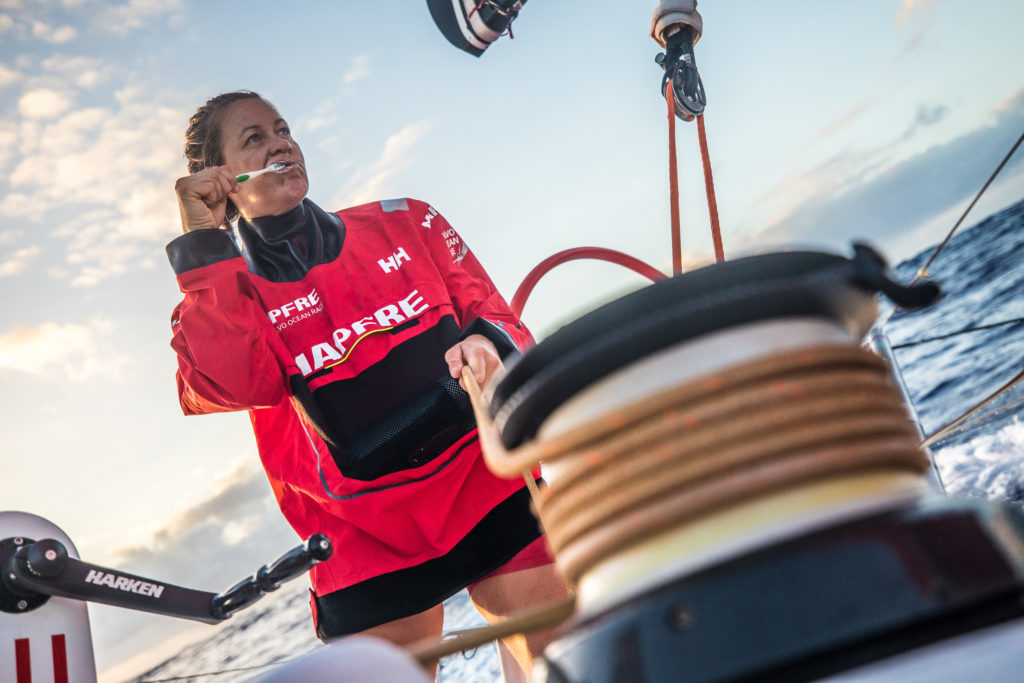 Life on board MAPFRE when you don’t have enough time for yourself! Sophie Ciszek catching some personal time while on watch.
Photo by Ugo Fonolla/Volvo Ocean Race

Team Sun Hung Kai/Scallywag were showing no signs of relinquishing their grip on the Leg 4 lead as they went under the 1,000-miles-to-go barrier.

Hell-bent on arriving in their home port of Hong Kong as heroes, Scallywag have maintained their comfortable lead of 73 miles over closest rivals Vestas 11th Hour Racing as the action reaches fever pitch.

The only team not to lose miles to Scallywag in the six hours leading up to the position report was third-placed Dongfeng Race Team, who managed to claw back half a mile. Since then Dongfeng has played her ‘Stealth Mode’ card.

Charles Caudrelier’s men will have to pull something bigger out of the bag if they want to overhaul Scallywag at this stage of the race – however Vestas 11th Hour Racing, at 14 miles ahead, may present a more realistic target.

If Dongfeng can overhaul Vestas and finish second behind Scallywag, the significance of boats from Hong Kong and China atop the table at the first ever stopover in Hong Kong would be massive. 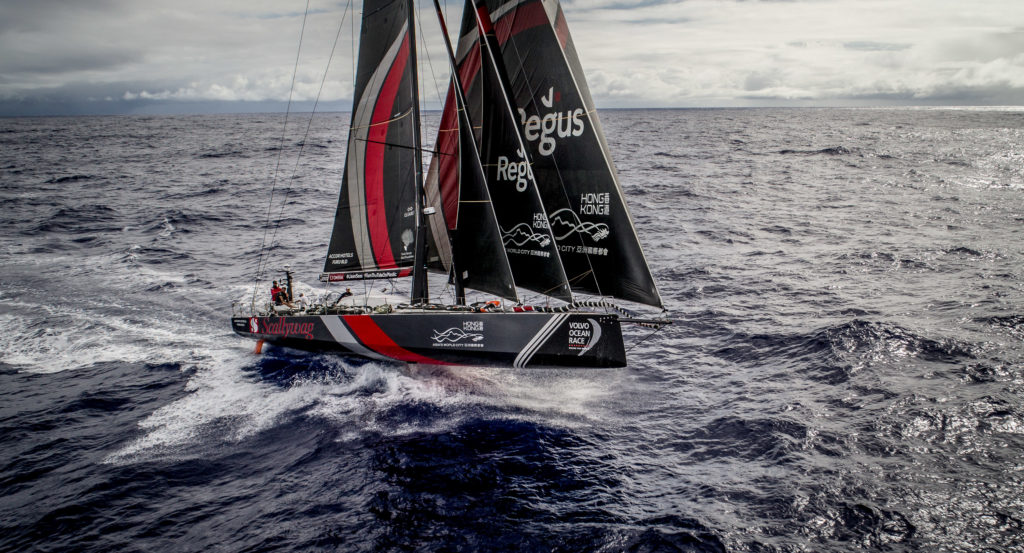 The sea state has changed and Scallywag is flying off the waves.
Photo by Konrad Frost/Volvo Ocean Race

“It’s a new experience for us, but it’s a good one,” Scallywag skipper Dave Witt said. “We’ve only got 1,300 miles to go, so we’re looking ok. We’re in a pretty strong position, and we’re going to get further ahead at the moment. The weather pattern suits us, but the others are going to fall out of it. I expect us to extend our lead.”

Witt revealed the main threat to their impending victory was not from the other crews but from the weather. His crew is currently facing head-on seas of up to four metres, with boat speeds of more than 20 knots.

“We’ve just got try not to break the boat,” he added. “Providing we can keep the boat in one piece we’re going to have a nice lead going into Hong Kong. We’re really looking forward to it.”

Another 70 miles behind the trio of teams desperately trying to hunt down Scallywag, Leg 2 and 3 winners MAPFRE were having to consolidate their fifth place, conscious of attack from Turn the Tide on Plastic and Team Brunel in sixth and seventh.

While Scallywag make the most of continuing breeze, winds at the back of the fleet are set to drop to around 14 knots, further hampering any hopes of catching up with the group in front.