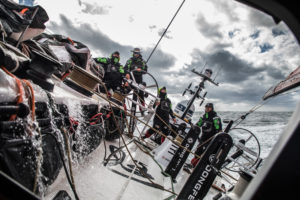 Few of us landlubbers know what it’s like to experience the tough conditions of the Southern Ocean. For some of the crew in the race this will be their first time, for others they will have done it before – some as many as 8 times!

Despite the number of ‘Southern Ocean Badges of Honour’ they wear, each and every crew member has total respect for this inhospitable ocean. Yet it brings some delight in terms of the graceful Albatross as well as much fear and trepidation in terms of the wind pressure, big seas and of course extremely cold conditions.

This leg is all about risk and reward as the Melbourne is just 5 days, and then another long 6000-plus nautical mile leg starts, so any serious damage to a boat or its equipment could spell disaster in two consecutive legs. 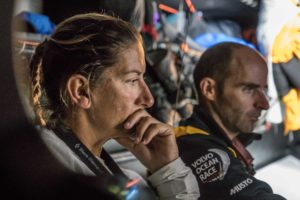 A trade-off between speed and safety was playing out among the Volvo Ocean Race fleet on Tuesday as the teams geared up for their first real taste of Southern Ocean brutality as a huge depression was forming west of the fleet with winds of up to 60 knots at its centre – and it is moving so fast that the seven Volvo Ocean 65s will not be able to outrun it. 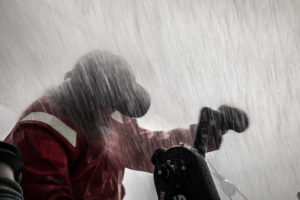 Rather the teams had to make tough decisions about where to position themselves in relation to the storm, which is set to strike today. A more southerly route will see faster sailing over the next day or so but with it comes the danger of being closer to the centre of the depression.

What’s more, a virtual exclusion zone to keep the fleet north of Antarctica’s ice fields will prevent teams diving below the low to escape its strongest conditions.

On the other hand the northerly option appears safer as it will put the teams further from the storm’s centre, easing the huge pressure on the boat, but it will undoubtedly prove slower.

A split appeared in the pack with current leg leader Dongfeng Race Team, MAPFRE, team Akzonobel and Team Brunel choosing to go south, while Team Sun Hung Kai/Scallywag, Vestas 11th Hour Racing and Turn the Tide on Plastic are opting to stay more to the north.

“There’s a certain amount of risk being further south and straight in front of the depression,” explained Simon Fisher, Vestas’ navigator.

“If we can be further north and making good progress that would certainly be a more seamanlike way to go about it.” 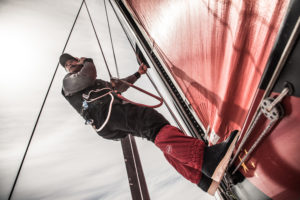 On board Dongfeng. Kevin Escoffier going up to check the rig before the storm.
Photo by Martin Keruzore/Volvo Ocean Race

Knowing when to put the hammer down and when to choose the more conservative option is vital to glory in the Volvo Ocean Race, and Fisher is an expert at these kind of decisions – after all, he guided Abu Dhabi Ocean Racing to victory in the 2014-15 edition.

“It’s going to be an interesting couple of days,” he added. “It’s going to be a fine line between sailing as fast as you can on optimal course versus sailing in a safe place, looking after the boat and not putting yourself somewhere that you can get run over by the low.

“We want to sail as fast as possible but we have to be careful we don’t get into an area of the low pressure where the wind heads, the sea state is terrible and we get pushed against the ice gate.” 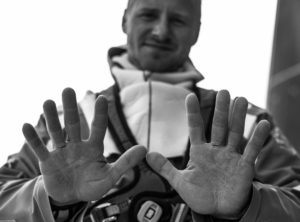 The harsh realities, remoteness and the isolation of being in the Southern Ocean and away from civilisation and family is captured in this note from Race HQ: Perhaps the only sailor not entirely consumed with thoughts of the impending weather was Brunel skipper Bouwe Bekking. The Dutch sailor’s father sadly passed away, and his funeral is today.

Bekking, among the race’s most experienced sailors with seven previous editions under his belt, admitted his mind was elsewhere in an emotional dispatch from onboard.

“We knew that it was just matter of time and we agreed beforehand that I would race, but I’m not feeling happy about it,” he wrote.

“The only comfort what I get is that my dad reached a very nice age, the oldest so far in the family history and he had a good life. He always supported my choice to become a professional sailor: just live your life and enjoy it 100 per cent.

“So, even though we are racing hard, today my thoughts are with my old man, who I will miss tremendously.”

The north-south divide resulted in separation of more than 200 miles. 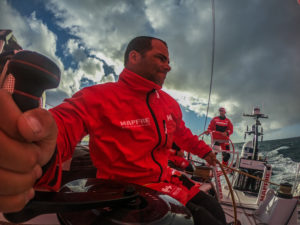 In a bold break from the rest of the fleet, British skipper Dee Caffari opted to take her young Turn the Tide on Plastic crew furthest to the north in the hope of dodging the worst of the system’s howling winds and forecast for enormous seas.

This is in contrast to the strategies of leg leader Dongfeng Race Team, MAPFRE, team Akzonobel, Team Brunel and Team Sun Hung Kai/Scallywag, who have chosen to roll the dice and take the southern option.

Caffari, one of the world’s most experienced and respected offshore sailors, is known for her seamanship – and as most of her team have never faced the Southern Ocean before, she and navigator Nico Lunven have picked a route that gives them more options, including not needing to throttle back as much as her counterparts in the south.

But as the storm is more than 400 nautical miles wide and moving quickly east, being swallowed up by it is inevitable – and it has been playing heavily on Caffari’s mind.

“I have had bad guts for 24 hours and I was thinking it may have been something I have eaten or drunk, but that is highly unlikely,” she wrote to race headquarters in a blog post.

“If I was honest it may be the responsibility sitting heavy on me to make the right decision and get boat and team through the next 48 hours unscathed. It is turning my stomach in knots, something I have never experienced before.” 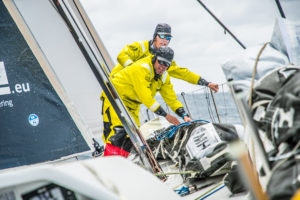 Meanwhile those on the southern route are facing challenges of their own. When the front hits they will almost certainly experience stronger winds, and unlike Turn the Tide on Plastic to the north they have less options to escape.

A virtual exclusion zone south of the fleet has been implemented by race control to keep the fleet away from Antarctica’s ice fields, and the leaders are likely to gybe along the ice limit as they skirt the exclusion zone.

“I don’t think we will be doing any racing over the next few hours,” Dongfeng skipper Charles Caudrelier said. “We want to sail fast but the main priority is not to break the boat or the crew.”

Around 75 miles north of the leading pack Vestas 11th Hour Racing were also bracing themselves for a battering. At 1300 UTC Charlie Enright’s crew were by far the fastest in the fleet, notching up 22.5 knots compared to Dongfeng’s 16.3.

“Feels like we’re manning battle stations and preparing for war,” navigator Simon Fisher said. His team may have chosen the best option, a middle ground to the north of the pack, but still in touch and with more options.

Wind speeds are now up to 25 knots and forecast to build. The next 48 hours will be crucial to success in Leg 3.