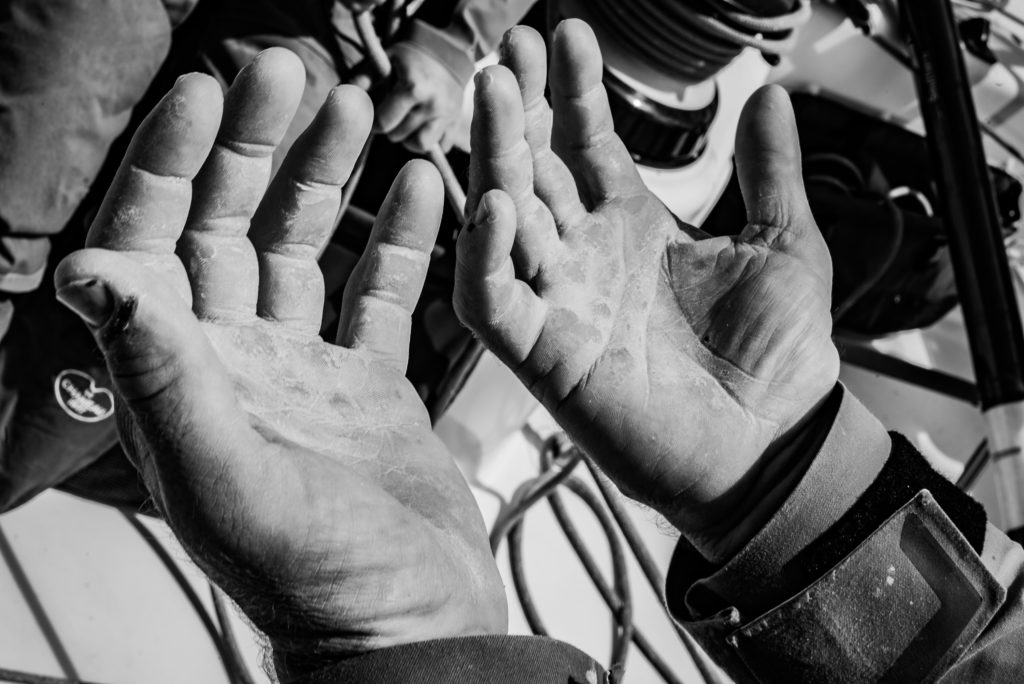 The knarled, cracked and rough hands of an AkzoNobel crew.
Photo by James Blake/Volvo Ocean Race

The Southern Ocean leg starts on Sunday at 01h00 UTC.

Seven Volvo Ocean Race teams will embark on one of the most classic legs in offshore racing from Auckland, New Zealand.

Leg 7 of the Volvo Ocean Race is an iconic Southern Ocean challenge; a 7,600 nautical mile race through “Furious Fifties”, the inhospitable, remote waters south of 50-degrees latitude that circle Antarctica, around Cape Horn and up to Itajaí, Brazil. 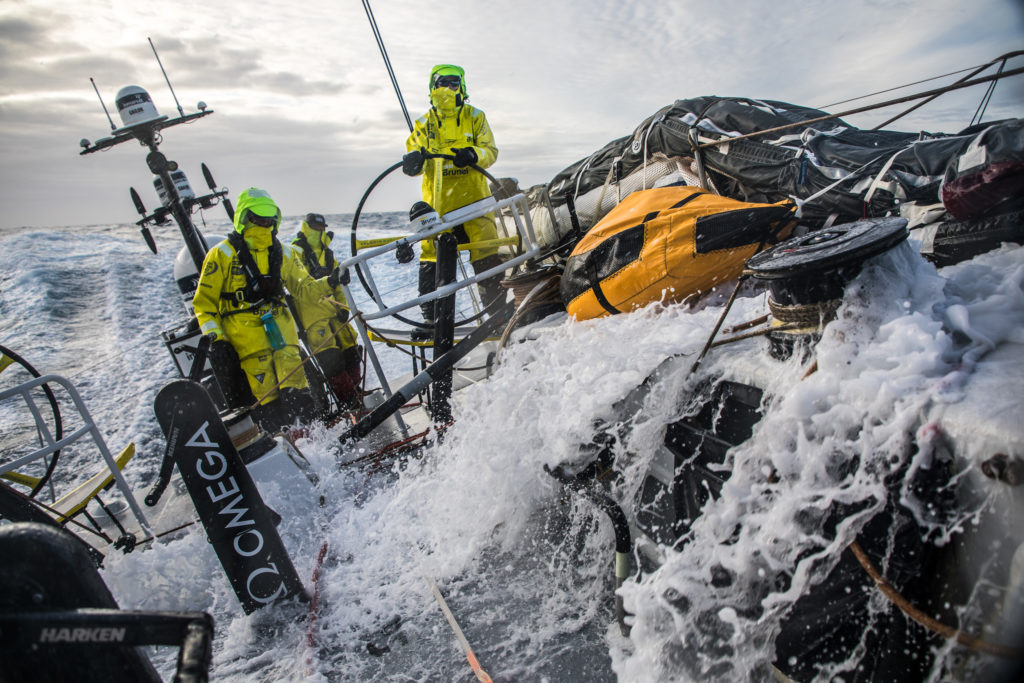 Aboard Brunel, Peter Burling stearing, Louis at the aft pedestal, Abby at the antena.
Photo by Ugo Fonolla/Volvo Ocean Race

“It’s going to be bloody cold,” said Bouwe Bekking, the skipper of Team Brunel, who is on his eighth lap of the planet. “It’s probably the best sailing you can get. We know the boats so well at this point in the race, we will be pushing 100 per cent.

“And going around Cape Horn is a big psychological boost as you know the Southern Ocean is behind you, every mile you go north it gets warmer. So it’s a funny thing, there will be moments when you hate it, but you know better times are ahead and when you arrive in Brazil, you forget the bad parts and the good parts stay with you.” 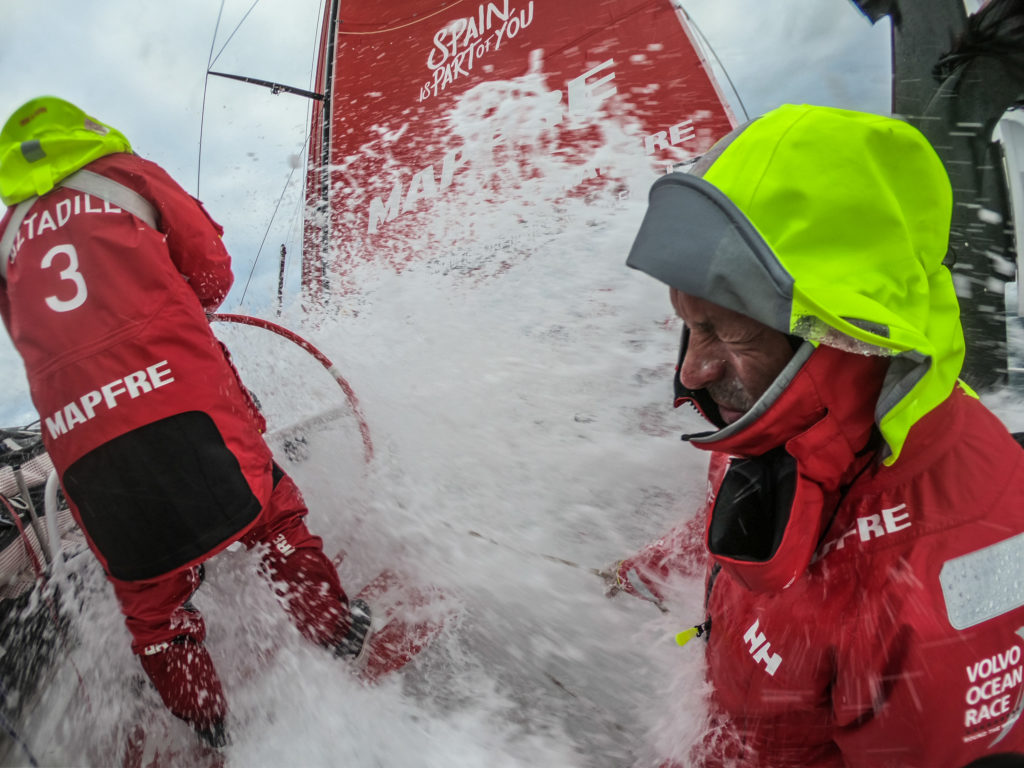 Leg 7 is a double-point scoring leg, with an additional bonus point awarded to the first boat to pass Cape Horn. With so many points on offer, this classic Southern Ocean leg, a return to the roots of the race, has the potential to be decisive on the leaderboard.

MAPFRE is the overall leader following six legs, but after a fourth place finish and late charge to get on the podium on the leg into Auckland, the team’s position at the top doesn’t appear as secure as it was early on.

“Of course I feel like they are coming closer and faster, but we can only do one thing – push the boat, sail well and try to win this leg,” said MAPFRE skipper Xabi Fernández, who has six previous roundings of Cape Horn to his credit.

“If we can win this leg, it’s a big step forward. There is nothing to change, we just need to sail a little bit better than the others and push a little bit harder.” 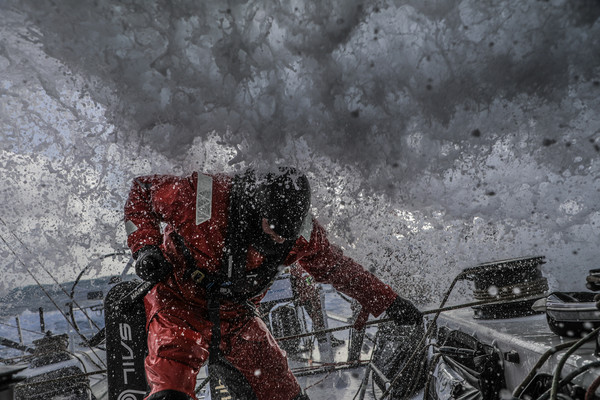 Another shower on board Sun Hung Kai/Scallywag.
Photo by Konrad Frost/Volvo Ocean Race

Scallywag is one of the teams putting pressure on the leaders. The team is coming off one-two finishes on the last two legs, vaulting up the leaderboard to third place. Skipper David Witt was succinct when asked about his approach to this Southern Ocean leg.

“We’re going to win the leg or drop the rig. That’s the mentality,” Witt said. “This is a big chance for Scallywag to stay up there and do something or drop back towards the back of the pack… We don’t care what goes wrong or what breaks… We’re just going to send it.”

Another team making a push up the leaderboard is team AkzoNobel. Skipper Simeon Tienpont led his team to victory on the race into Auckland, and now he’s determined to continue the charge.

“You always have to look at the race as a whole and there’s more than 50 per cent to go in terms of points. It’s been a big improvement and a big learning curve. We’re working unbelievably hard and we want to keep the momentum going. The leg win into Auckland proved we’re on the right track and gives some confidence.” 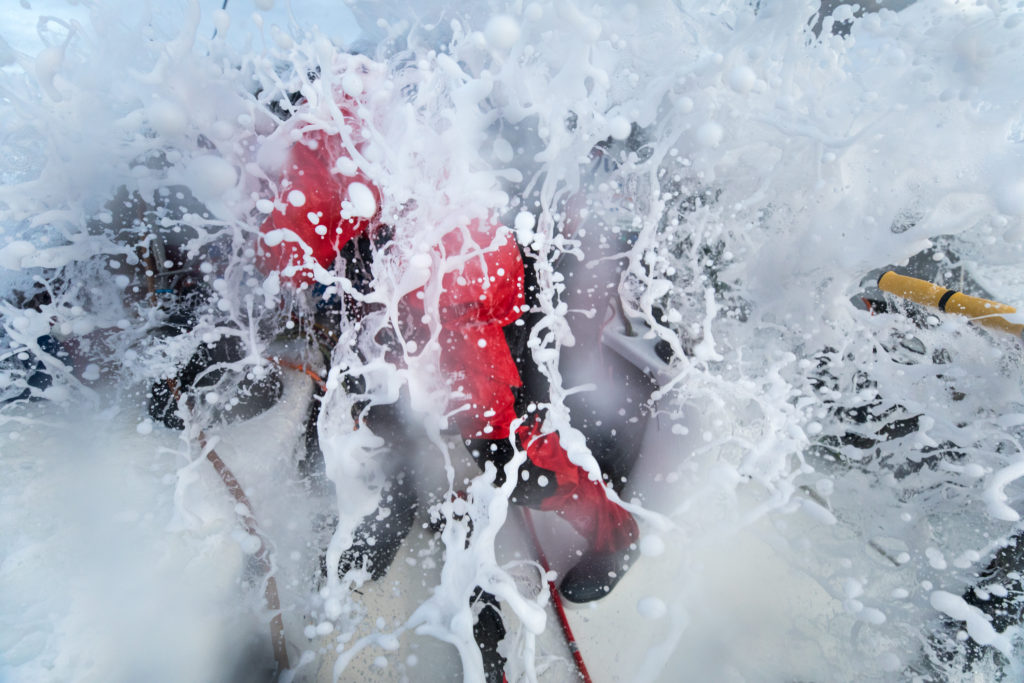 The Ice Exclusion Zone for Leg 7 is set very far south, at points diving as deep as the 59-degree south latitude line. In theory this will shorten the distance the boats need to sail, and speed up the leg. But it comes at a cost – more bitter cold and towering seas, in wind and waves that circle the planet unimpeded. The challenge isn’t lost on the sailors.

“You can’t ignore where you’re going and the responsibility that lies with the skipper,” said Dee Caffari, the skipper of Turn the Tide on Plastic. “But we have already had Leg 3, from Cape Town to Melbourne. Everybody has had a taste of how wet, cold and windy it can be. We’re not going down into the unknown, which gives you a lot more confidence.”

Dongfeng skipper Charles Caudrelier can speak first-hand about how challenging this part of the world can be.

“It’s a difficult leg for sure. Sometimes you have to forget the race and take care of the boat and the crew,” he said. “I know this very well. I’ve done this leg twice and never finished with the mast up! And Pascal (Bidégorry) did this leg twice and he’s never made it past Cape Horn!! So that is one of our goals, make it past Cape Horn and finish with the mast up!”

Re-joining the fleet is Vestas 11th Hour Racing after missing the last two legs with damage sustained in a collision near the end of Leg 4. Skipper Charlie Enright says his team is eager to get racing again and resume challenging the leaders.