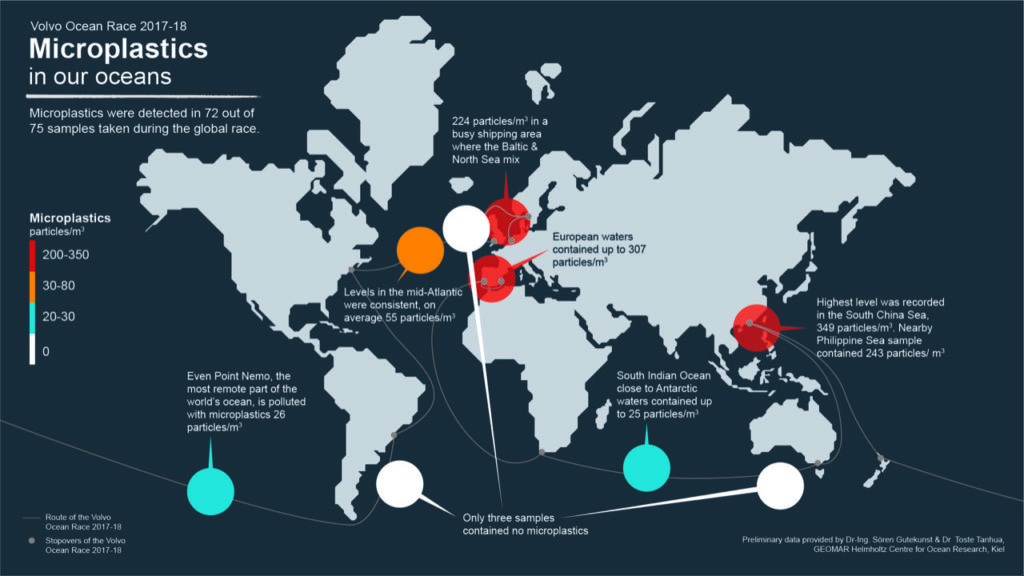 Following the completion of the sailing event, the groundbreaking science element of the Sustainability Programme revealed the spread of microplastic pollution.

Only three of the 75 samples collected during the race, south of Australia, east of Argentina and west of Ireland, have been found to contain no microplastics.

The most recent data collected, before the race finale in The Hague, by scientific devices on board Team AkzoNobel and Turn the Tide on Plastic boats, found particularly high levels of microplastics, 224 particles per cubic metre, in Skagerrak, a 150-mile strait that runs between Norway, Sweden and Denmark where the outflow from the Baltic Sea meets the Atlantic Ocean.

Even close to Point Nemo, the furthest place from land on Earth, where the nearest humans are on the International Space Station, between nine and 26 particles of microplastic per cubic metre were recorded.

The seawater samples were collected during the course of the 45,000 nautical mile, eight-month race, which passed six continents and 12 landmark Host Cities. The race began in Alicante last October, finishing in The Hague in June. 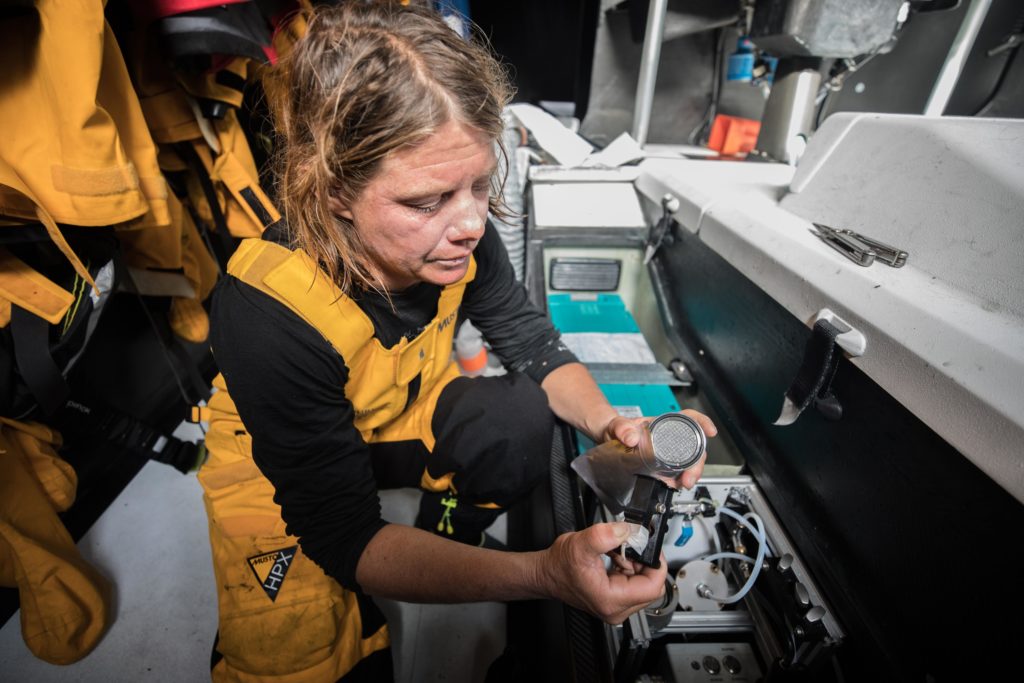 Leg 3, Cape Town to Melbourne, day 10, on board Turn the Tide on Plastic.
Photo by Jeremie Lecaudey/Volvo Ocean Race

Anne-Cecile Turner, Sustainability Programme Leader for the Volvo Ocean Race, said: “We have used a sporting event to collect groundbreaking scientific data to provide a global map of microplastics concentrations – even finding them in some of the remotest places on Earth. The stark findings give a clear mandate for positive and decisive action from national governments, international organisations, business and individuals to stop plastic polluting our seas.

“Our ambition is that the data will provide a new benchmark for our understanding of the spread of these ubiquitous particles and offer a template for future scientific methodology.

“With the continuation of the Sustainability Programme, we will continue our mission to inspire, engage and act as a pioneer, with the aim of restoring ocean health.”

Dr. Toste Tanhua of GEOMAR Institute for Ocean Research Kiel, funded by the Cluster of Excellence Future Ocean, analysed the preliminary microplastics data at their laboratory in Kiel, Germany.

The data has been then uploaded to a National Oceanic and Atmospheric Administration (NOAA) database where scientists are able to access it open source.

Dr. Tanhua said: “Volvo Ocean Race Science Programme has contributed enormously to the understanding of microplastic contribution around the world, and has contributed to a global map of CO2 uptake by the oceans. The race has showed that the race yachts and sailors can be excellent science supporters.”

The boats also collect other oceanographic data measurements including temperature, dissolved CO2, salinity, algae content (as chlorophyll a) that gives an indication of levels of ocean health and acidification and supports quantification of the ocean’s uptake of CO2. In parallel, 30 scientific drifter buoys, deployed during the race, are transmitting data that is essential for forecasting of weather and climate changes, in both the short and long term. This is being utilised by the World Meteorological Organisation and UNESCO’s Intergovernmental Oceanographic Commission.

Stuart Templar, Vice President of Sustainability at Volvo Cars, said: “Volvo Cars is proud to have funded the Science Programme, which has produced an unprecedented picture of the health of our oceans. In particular, this clearly shows the extent of the global problem of micro-plastic pollution.

“Decisive action needs to be taken, including by business. That is why Volvo Cars has made a number of pledges during the Race, including removing single use plastic by the end of 2019 and ensuring that at least 25% of the plastic in new Volvos is made from recycled material by 2025.

“The Volvo Ocean Race has set the standard for other major sporting events to follow in terms of practising and promoting sustainability. We look forward to supporting the further development of the Sustainability Programme.”

Microplastics are often invisible to the naked eye and can take thousands of years to degrade. By collecting information on their levels, the Science Programme is helping scientists gain insight into the scale of plastic pollution and its impact on marine life.

To build upon the programme’s sustainability achievements, it will be embedded at the heart of the race going forward and in the run up to the next edition, the programme will continue to organise a range of international Ocean Summits, further expand the Education Programme and continue to pioneer a Scientific Programme focussing on ocean plastic.

It will collaborate with a range of innovative partners, including 11th Hour Racing and UN Environment, to help deliver a lasting legacy and drive real change for a healthy planet.

The Sustainability Programme also convened a post-race workshop with key global stakeholders from science, academia, the private sector and other institutions, including UN Environment and Mirpuri Foundation, to identify the gaps to fill in order to advance our understanding of these issues and to align our missions.

Fiona Ball, Head of Responsible Business at Sky Ocean Rescue, said: “The data that Turn the Tide on Plastic collected throughout Volvo Ocean Race highlights the critical state of our oceans. By supporting the Turn the Tide on Plastic yacht, Sky Ocean Rescue aims to raise awareness and inspire everyone to make simple, everyday changes to stop our oceans from drowning in plastic. We can all play our part and turn off the plastic tap, now is the time for fundamental change to protect our planet.”

Volvo Ocean Race Sustainability Programme is a partnership in collaboration with Sustainability Partners 11th Hour Racing, the Mirpuri Foundation and our other main partners, Volvo, AkzoNobel, Ocean Family Foundation, Stena Recycling and Bluewater. The Turn the Tide on Plastic boat was supported by Sky Ocean Rescue.

UN Environment #CleanSeas campaign, which partners with the Race, aims to encourage governments, businesses and individuals to make changes in their own lives to reduce their plastic footprint.