Volvo Ocean Race. On their Way to Cape Town 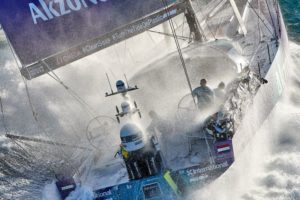 Stunning wet sailing at the start of leg 2.
pic by Thierry Martinez/team AkzoNobel 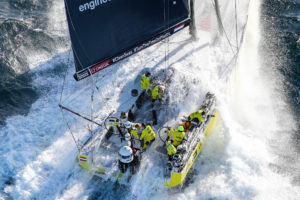 Aboard Brunel after the start of leg 2.
pic by Ainhoa Sanchez/Volvo Ocean Race 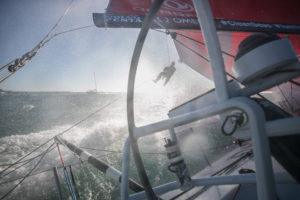 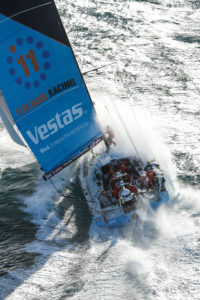 Vestas in a hurry to get to Cape Town!
pic by Ainhoa Sanchez/Volvo Ocean Race 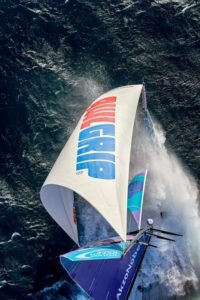 The leg out of Lisbon was fast – very fast.
pic by Thierry Martinez/team AkzoNobel

Dongfeng Race Team converted a strong start into an early lead as the Volvo Ocean Race fleet embarked on Leg 2, a 7,000 nautical mile race from Lisbon to Cape Town.

Conditions were perfect for the start, with bright blue skies, and a 15-20 knot Northerly breeze that allowed the fleet to reach up and down the Tagus River past the city front of Lisbon.

After exiting the river and heading offshore past the protection of Cascais, the wind built to over 30-knots, with a heavy ocean swell near 4-metres – so the first night was fast and challenging as the teams charge to the southwest.

“It’s going to be fast,” said Dongfeng skipper Charles Caudrelier. “We have been preparing for this, training in strong winds for six months, so I hope we are ready. We have some good drivers in these conditions so I hope we will be fast.”

And indeed, within 15-minutes of clearing the mouth of the river, the fleet was already seeing over 30-knots of wind and Dongfeng Race Team recorded a boatspeed of nearly 33-knots.

Charlie Enright, the skipper of race leader Vestas 11th Hour Racing was in a strong position early, but appeared to be caught out with too much sail up for the final stretch down the river, and fell back to fifth place.

“We’re confident, but not cocky,” Enright said before the start. “We want to take what we’ve learned and apply it to leg 2. It’s going to be a much different leg. It will be a lot more boatspeed oriented and we’re looking forward to that.”

“The real race starts now,” said Xabi Fernández, the skipper of MAPFRE. “Today we will sail for a couple of days in heavy winds. Everyone will be competitive so we’ll need to go as fast as we can.”

This leg is different to previous races as the tactical options on the leg have been opened up this year by the removal of a traditional waypoint, the island of Fernando de Noronha, about 170 nautical miles off the coast of Brazil.

On this leg the teams transition from the North Atlantic, through the Doldrums, into the trade winds and may even dip a toe into the Southern Ocean before the finish in Cape Town, which has already been a stopover host 10 times.

While teams often sail far west to pick up the tradewinds earlier, it adds hundreds of miles to the route to Cape Town. Without this island as a mark of the race course, the shorter, but normally slower option of sailing further east, down the coast of Africa, may be in play.

“It’s a very interesting one, maybe more interesting than in the past,” said Charlie Enright, the skipper of Leg 1 winner, Vestas 11th Hour Racing. “You usually have to go nearly all the way to Brazil… ‘West is best’ as they say…”
But it’s not clear that will be the case this time.

“I think (taking out the waypoint) changes things a lot,” said Sun Hun Kai/Scallywag skipper David Witt. “I think this will be an interesting leg and I think you might see the biggest split you’ve seen for a long time in the Volvo Ocean Race. But we’ll see what happens.”

“For sure you can go more east,” agreed Dongfeng Race Team skipper Charles Caudrelier. “The difference is huge, but it’s a danger (tactically). It’s always a balance and it’s always difficult to know where to go. It will be a nightmare for the navigators.”

“Let’s see. Hopefully the others will go the short way and we’ll keep going west,” said Xabi Fernández. “It’s hard to know. It will be busy for (navigator) Juan Vila. But we trust his instincts and his work and hopefully we have a good crossing of the equator.”

For many of the rookie sailors spread across the teams, Leg 2 will be the longest they have been at sea, and a new experience of true offshore sailing.

“We have crew on board who have never been at sea for longer than six or seven days at a time,” said Turn the Tide on Plastic skipper Dee Caffari, who is shepherding some rookie offshore sailors through their first big ocean experiences on this leg. “So they will be on a steep learning curve. This is the first one where you get a little taste of everything.”

Bouwe Bekking, sailing his eighth Volvo Ocean Race as skipper of Team Brunel, will take World Sailor of the Year and reigning America’s Cup winning skipper Pete Burling on his longest offshore sojourn, including a first Doldrums crossing that traditionally calls for a visit from King Neptune.

“We’re racing, but this is part of the tradition of the race, and that’s important,” Bekking said. “Someone like Peter Burling, there will be some nice footage of him, probably with a mohawk haircut or something like that… We have some extra items on board so that Neptune welcomes these guys properly.”