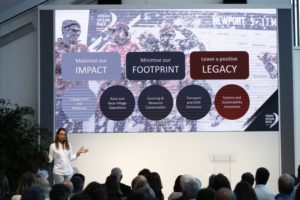 “Our oceans are under attack” – Wendy Schmidt

The Volvo Ocean Race has used the first of seven Ocean Summits it is hosting around the world in 2017-18 to launch a unique programme that will gather data from parts of the oceans that are otherwise inaccessible to scientists – while the Spanish government pledged its backing for UN Environment’s Clean Seas campaign.

Wednesday’s Ocean Summit in Alicante – held four days before the start of the 2017-18 edition of sailing’s 45-year-old race around the world – brought together politicians, scientists, business and sport to tackle the problem of ocean health, with a specific focus on plastic pollution.

As the world’s 14th largest economy, Spain’s declaration of support is a significant boost to the UN’s global campaign, which now boasts 32 member states and aims to ‘turn the tide on plastic’ by inspiring action from governments, businesses and individuals. 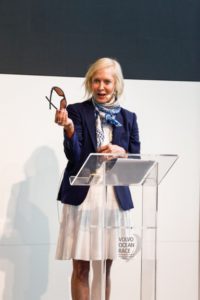 ‘Over the past six years we have been developing Spain’s new Marine Strategy, and one of its main goals is to tackle marine litter,’ said Raquel Orts Nebot, Spain’s Director General for Coast and Sea Sustainability. ‘In this regard, I confirm that Spain is joining the UN Clean Seas Campaign, with the firm purpose of supporting this global initiative and contributing to its impact worldwide.’

Head of UN Environment, Erik Solheim said: “Spain’s engagement in this campaign sends an important message across the Mediterranean region and the world. Our oceans are fundamental to our survival that we must do everything we can to protect them.”

Mayor of Alicante Gabriel Echávarri promised that there would be no plastic bottles at any event he attends in an official capacity. He also announced an education campaign on plastic in all schools in the city.

Wendy Schmidt, President of The Schmidt Family Foundation and Co-founder of 11th Hour Racing, told the Ocean Summit that the oceans were ‘under attack’.

“11th Hour Racing has been working since 2011 to engage sailors and the maritime industries to become advocates for a healthy ocean and we’ve seen a lot of conferences where people tell each other what they already know,” said Schmidt.

“What was special about this Volvo Ocean Race Ocean Summit is that this was a conference full of very creative thinkers. We’re all looking for answers. There are large companies here, small start-ups, NGOs and philanthropists, and everybody is trying to explore how to intervene with an innovative approach. 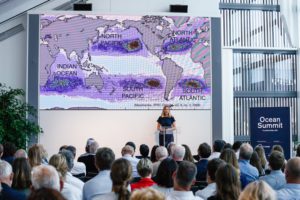 “We have to create a new plastic economy, develop new strategies, new technologies and new industries. Our goal is to make sure that this conversation happens everywhere. It doesn’t matter who you are or what you do, the oceans are our life support system.”

This sentiment was echoed by Kerstin Stranimaier, Director, Planet Possible for AkzoNobel: “We all need to open our eyes to new opportunities.”

The Science Programme is key to that goal of creating action to tackle plastic pollution, based on accurate data.

The Programme – made possible thanks to the support of Volvo Cars, and a consortium including NOAA (National Oceanic and Atmospheric Administration), JCOMMOPS (UNESCO-IOC), GEOMAR and SubCtech – is comprised of three elements.

All of the racing yachts in the 2017-18 edition will send data back from the oceans every 10 seconds – recording temperature, barometric pressure, wind speed and direction. This data will be passed on to NOAA and the European Centre for Medium Range Weather Forecasts. It will contribute to more accurate weather forecasts and climate models.

Secondly, during the four most isolated legs in the race, all seven yachts will carry drifter buoys equipped with satellite communications to transmit information on ocean composition and currents.

Thirdly, the Turn the Tide on Plastic team skippered by British yachtswoman Dee Caffari will carry instruments onboard to test salinity, dissolved CO2 and Chlorophyll-a (algae), and for the first time ever, microplastics, directly in the sea water around them.

These key metrics for ocean health will be logged in order to create a complete snapshot of parts of the world’s oceans scientists rarely, if ever, get to study.

“Volvo Cars is proud to support the Volvo Ocean Race Science Programme and help improve our understanding of the health of the oceans,” said Niklas Kilberg, Volvo Cars’ Senior Manager for Sustainability. “This innovative project means that the boats are not just sailing in a top-level sporting competition, but they’re also undertaking scientific research.

“By collecting data from the remotest parts of the oceans they’ll be collecting vital information which can be used to help improve marine health, including tackling the growing problem of plastic pollution.”

“We believe that the Race is a global platform that allows us to communicate simultaneously our message and the message of the Ocean Summits to millions of people around the world. The Volvo Ocean Race Ocean Summits are a very powerful tool for the Mirpuri Foundation and for all of the sustainability partners here today.”

The next Ocean Summit is scheduled for 7 December at Cape Town.

“Partnering with the Volvo Ocean Race is a great opportunity, to accelerate ocean understanding through sport, science and innovation,” Schmidt concluded. “In this race, which crosses 45,000 nautical miles and touches 12 iconic Host Cities, the sailors can bring stories of the ocean everywhere, giving us a strong platform to engage new audiences all over the world.”