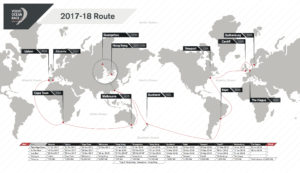 The Volvo Ocean Race starts on Sunday 22 October in Alicante, Spain, with the fleet heading for Lisbon and then Cape Town.

The 4 teams we now meet are:

vor Guide to TURN THE TIDE ON PLASTIC

Did you Know?
Two crew members will act as onboard medics , trained to clear air-ways, apply dressing and plaster casts, perform skin suturing, insert intravenous fluids and in dentistry.

About 1,000 people work on the race from the Organising Authority, to the teams, Host Cities and stakeholders.

The crew follow three or four-hour cycles, known as watch systems of being on duty or off duty – depending on the number of crew on board. But that doesn’t mean the crew won’t get interrupted when they are off duty – any major sail change or manoeuvre can require all the crew on deck.

The sailors will burn 5,000-6,000 calories a day. Even then sailors have reported losing up to 11kg on just one leg of the race. The diet consists mainly of freeze-dried, highly calorific meals plus regular snacks and vitamin boosts.

The water maker on board can produce 50 litres of drinking water per day – if it breaks, it can be a serious issue if the crew can’t repair it. Only the rain brings the luxury of a shower.

The maximum wave height recorded in the 2011-12 race was 16.3 metres by CAMPER during the first leg to Cape Town.

The maximum wind speed recorded was 70 knots (hurricane force) in the Southern Ocean in 2011-12.