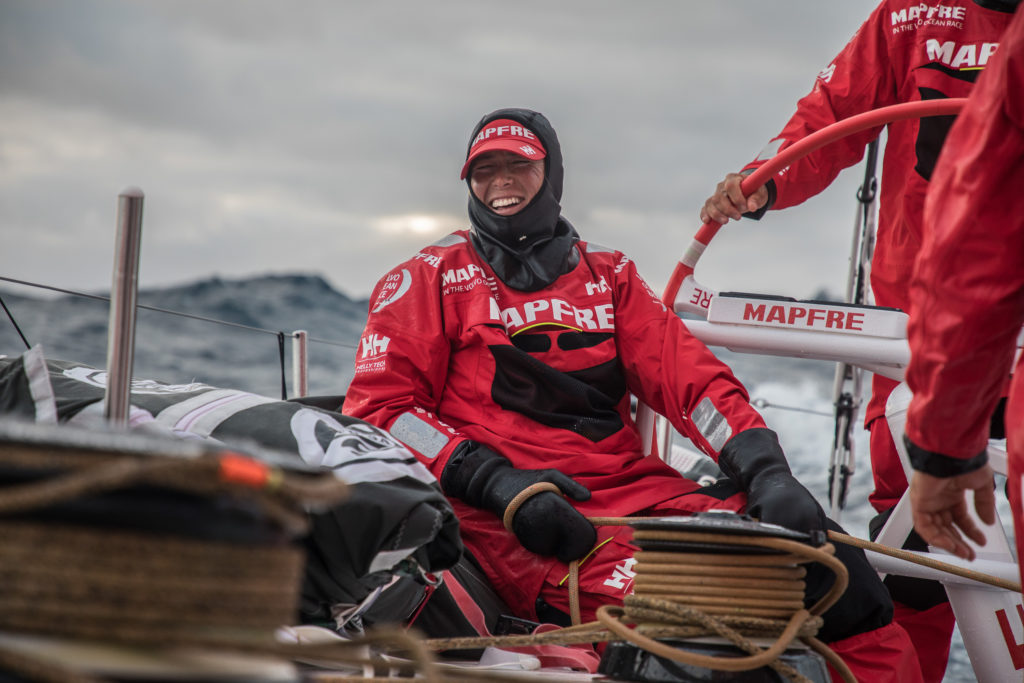 Tamara Echegoyen on board MAPFRE – enjoying being at the front of the pack.
Photo by Jen Edney/Volvo Ocean Race

Now that AkzoNobel has finished the leg from Cape Town to Melbourne after some damage early in the leg, it’s worth just stepping back and taking a look at MAPHRE’s great victory, how the fleet finished and what changes the teams are making for the next leg to Hong Kong.

MAPFRE slaughtered this Southern Ocean leg, and the opposition too, and she did it in style and without significant breakages.

Xabi Fernández and his crew sailed the leg hard, but had to work even harder for victory. They shadowed Dongfeng for much of the leg, and when they felt Dongfeng were flagging, piled on the pressure, opened the gap and never looked back. 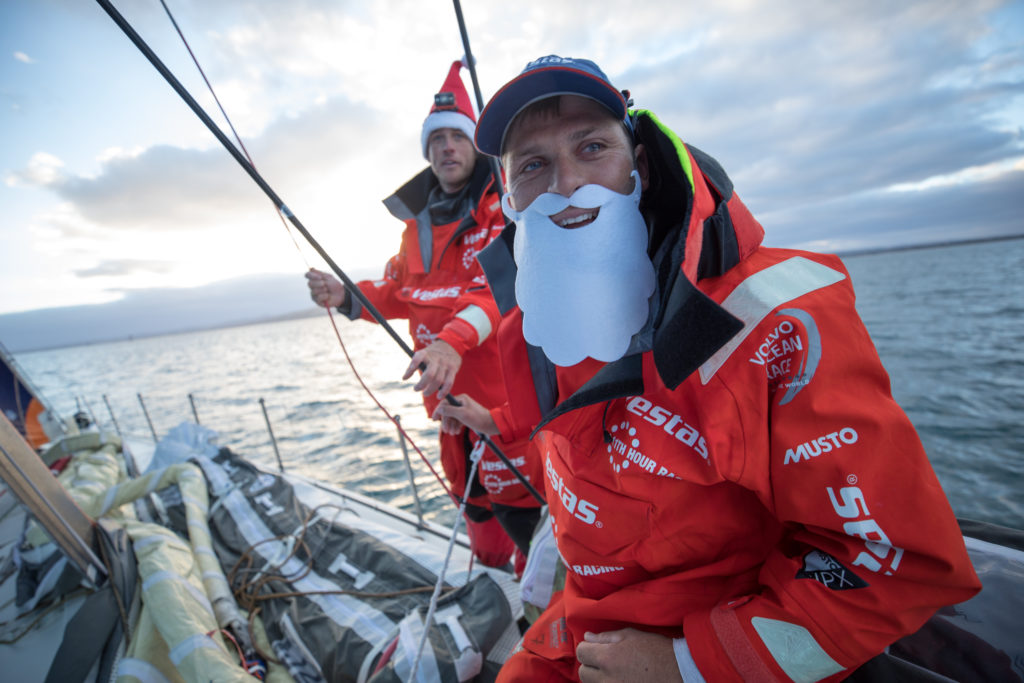 They threw in a series of gybes on the edge of the ice exclusion zone that would have broken most crew, sometimes doing more than one an hour. But her exhausted crew knew that once they had broken clear, they would be able to tap off and relax ever so slightly, and that their reward would be the honours for the leg. They accepted the challenge and reaped the rewards in fine style. 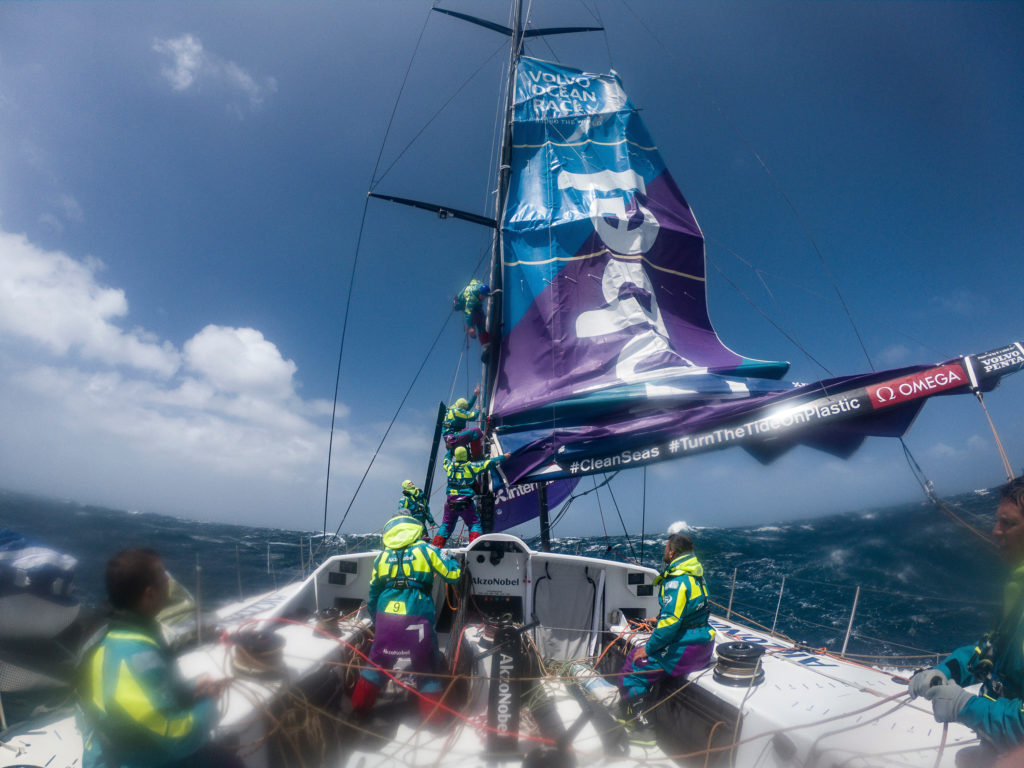 The damage to AkzoNobel.
Photo by James Blake/Volvo Ocean Race

This has to be one of the most impressive performances ever on a leg in this race.

“We had to fight very hard for this victory,” skipper Xabi Fernández said moments after crossing the finish line. “There’s so much of the race to go. But for now it’s looking good and we’re very happy of course.”

But of all the teams on Leg 3, MAPFRE had the highest work rate in terms of manoeuvres, which allowed them to stay in more favourable conditions for longer than their opposition. It was a powerful statement by a very strong crew. 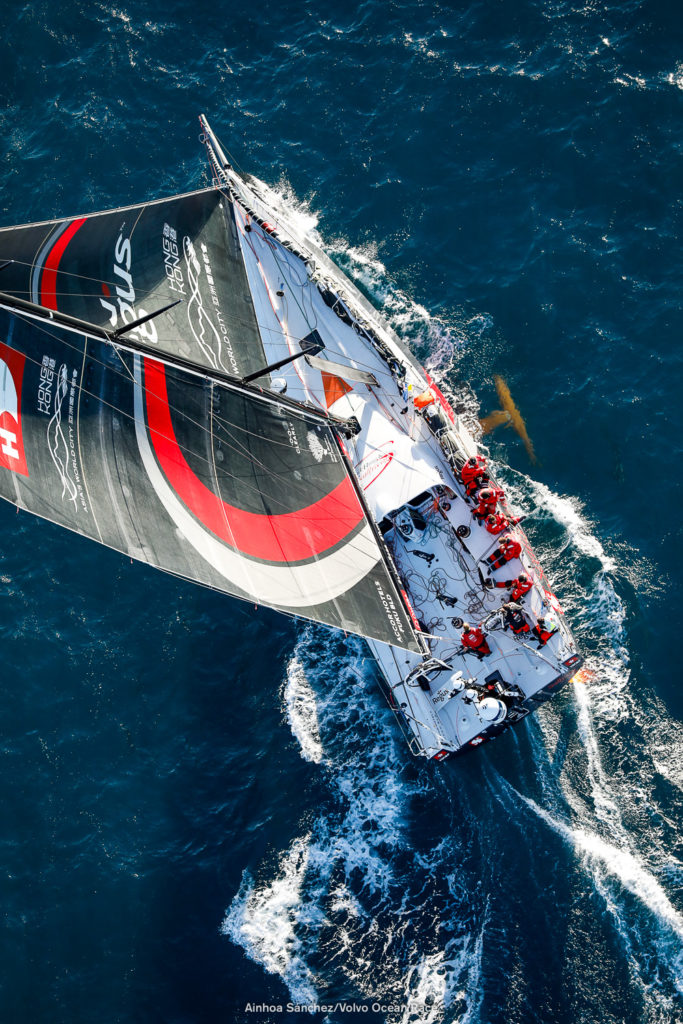 Dongfeng was able to fend off a late charge by Vestas 11th Hour Racing and Team Brunel to secure a second place finish on Leg 3, despite suffering damage to its keel system withing a day of the finish. 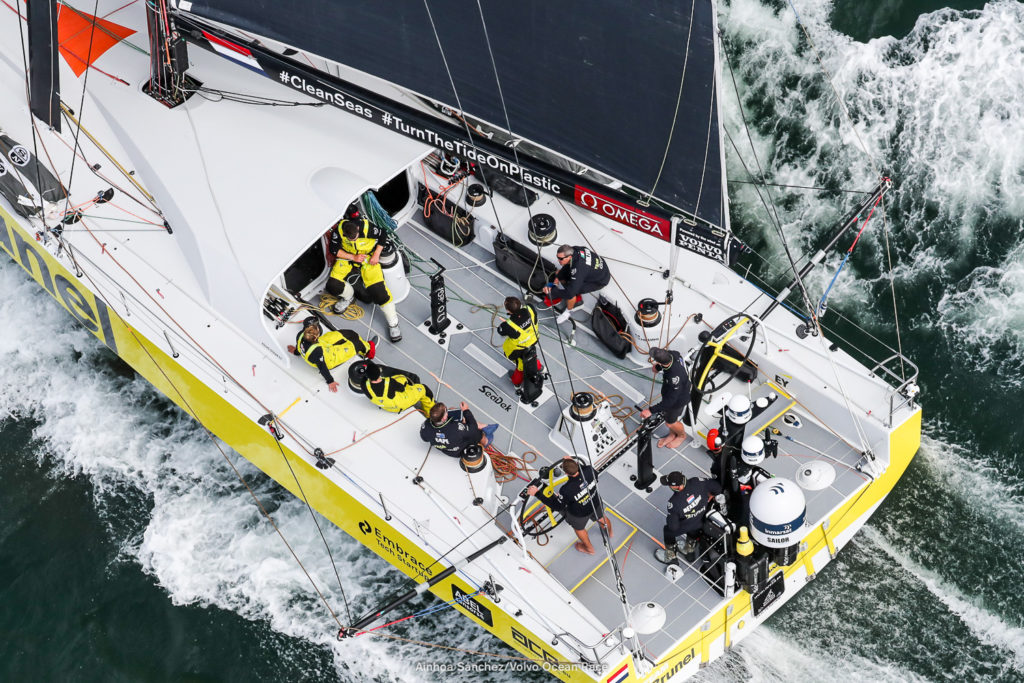 “This was the toughest leg I’ve ever done,” Caudrelier said. “We had this big fight with MAPFRE for most of the race and then a big problem on board just before the finish. A crazy section of gybing around the ice limits, it was a very, very difficult leg.

Vestas was third, followed by Brunel.

Mark Towill, team director and co-skipper acknowledged the scale of the achievement by Vestas: “It was a tough leg. We’re happy to be on the podium again. It’s great to be in on Christmas and I know we’re all looking forward to getting ashore. It was a difficult leg, hard on the bodies, but everyone has held up well.”

For Team Brunel, this is a second consecutive mid-fleet finish. Skipper Bouwe Bekking knows it keeps his team in touch with leaders, but time is running out to make a charge for the podium on the overall leaderboard.

“It’s been a really hard leg. We always expected it would be tough and it lived up to that,” Bekking said. “Plenty of breeze and some awesome sailing as well. “We don’t have any big issues. We could start for Leg 4 in 10 minutes! The boat has done incredibly well.”

Some conciliation is that Brunel set a 24 hour record with a distance of 538.10 nautical miles on December 24. “We had a fantastic day on board, a lot went well. In the end it was just not enough to catch Vestas and get on to the podium. But we have really shown that we continue to give everything until the last. We are getting closer to the stage” said Bekking.

Brunel crew member, British sailor Annie Lush, who was injured on leg 3 will not compete in the leg to Hong Kong, and is replaced by American Sally Barkow. 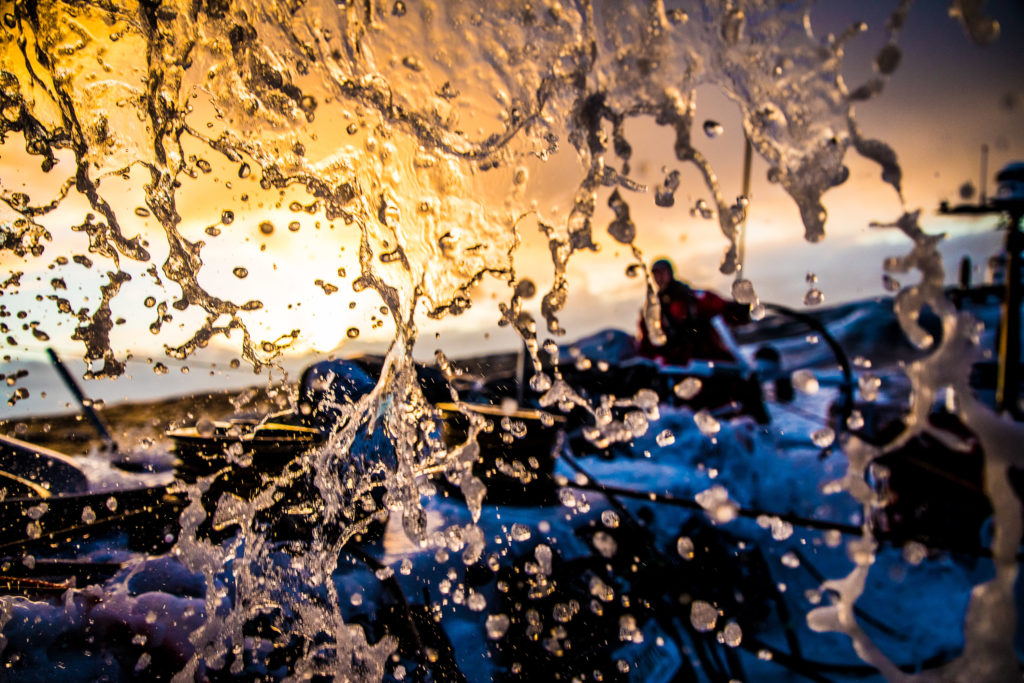 An understated caption indicated it was a bit wet aboard Sun Hung Kai/Scallywag.
Photo by Konrad Frost/Volvo Ocean Race

Lush was examined at the hospital on the 25th of December after arriving in Melbourne. The research had shown that she has broken two bones in her foot and one in her back. An operation is not necessary, rest is sufficient.

Lush said: “The doctors expect fractures to mend with 4 to 6 weeks of rest. In the end it’s not too bad, at least there’s no surgery needed. It’s hard to not be able to join the team for the upcoming leg but I have no choice. The only thing I can do now is focus on my recovery and make sure I get strong and back to the team as soon as possible (with perhaps a bit of spying on the other teams from my laptop)!.” 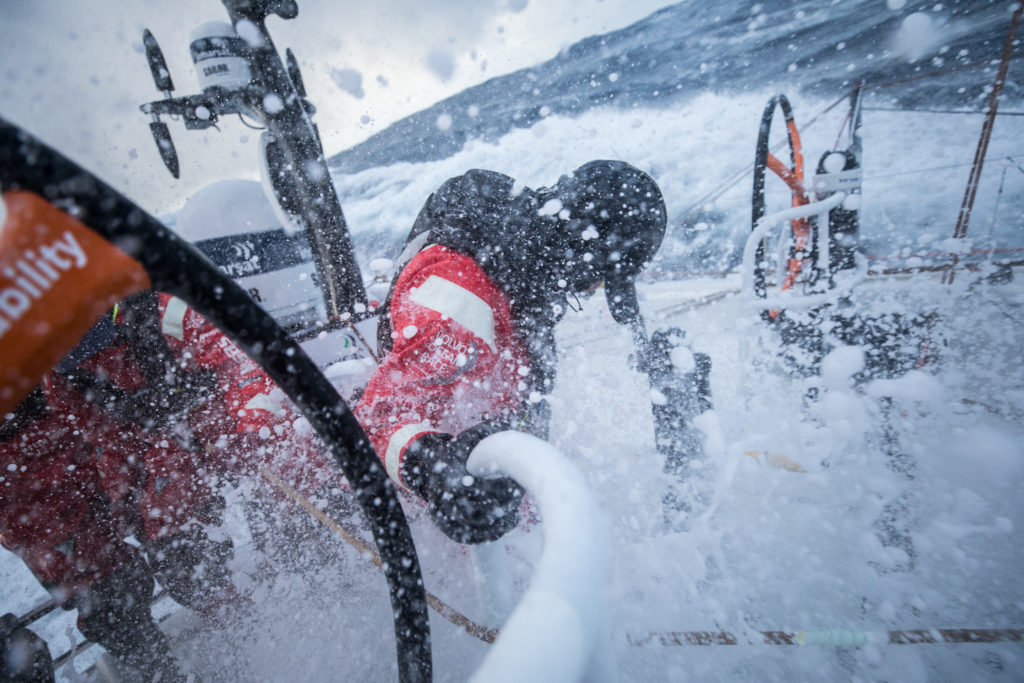 At the time of the incident, Lush was standing at the rear grinder, with Pete behind her trimming the main, when the boat hit a wave. Lush and Burling were swept against the rear guard. Lush ended up on the deck and was unable to stand up independently.

Lush: “When I was there, I knew I would not wash off because I was clipped on, but I could not do much more than stay there. Pete called up Bouwe and Alberto who quickly arrived on deck and helped drag me to the cabin hatch, where I was lifted through and carried into a bunk by Carlo and Kyle. Strangely enough it all went exactly as we had trained before the race in our medic course. Everyone was in the same position even the hatch and bunk were on the same side. This kind of preparation really pays off. I did not feel unsafe for a moment and the boys did a great job keeping my back straight and the pain minimal, not an easy feat when the boat’s doing 20+ knots in big seas!” 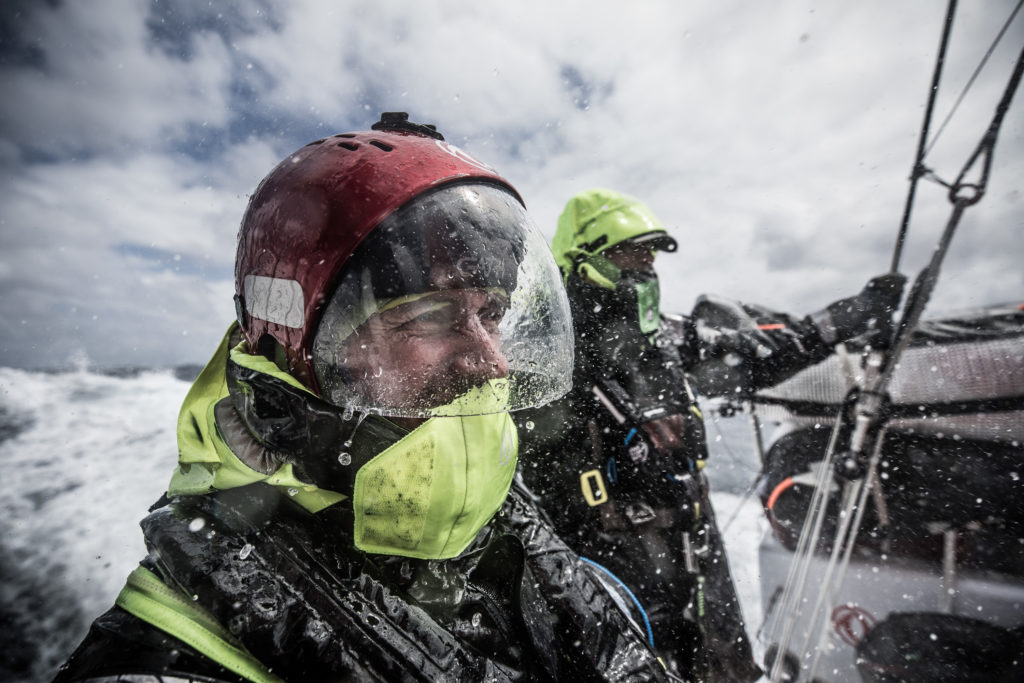 Dongfeng has called up the highly talented Swiss female sailor Justine Mettraux for Leg 4 from Melbourne to Hong Kong.

The selection of Mettraux is part of a planned rotation of crew in the Dongfeng Race Team squad with French sailor Marie Riou taking a break for this leg. Riou, a four-time Nacra 17 world champion, who sails as a trimmer and grinder on Dongfeng, will return to the team for Leg 5 from Hong Kong to Auckland.

Also returning to the crew for this leg is Kiwi mainsheet trimmer and watch captain Daryl Wislang who has made a good recovery from a back injury, French Vendee Globe star Jeremie Beyou, who was rested on Leg 3 and now replaces Stu Bannatyne, and Chinese sailor Chen Jinhao/Horace who is back in place of Xue Liu/Black.

Following an injury to Dongfeng navigator Pascal Bidegorry, the skipper has called up Franck Cammas, one of the stars of French sailing. Cammas is standing in at the last minute as replacement for Bidegorry who sustained a rib injury on Leg 3.