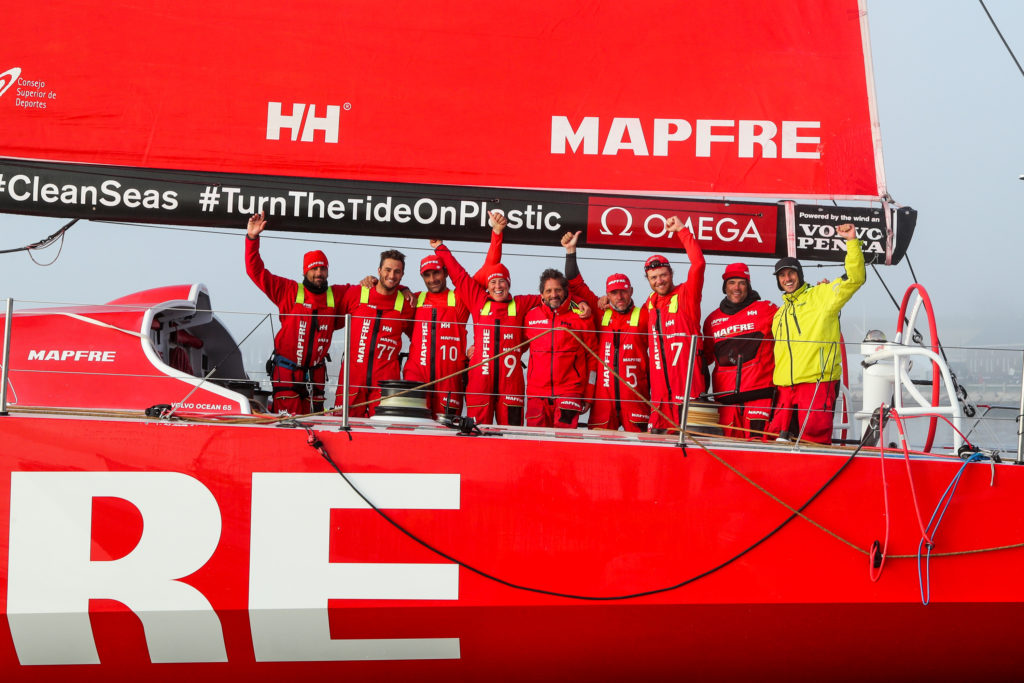 The Spanish team MAPFRE stunned the Volvo Ocean Race fleet on Tuesday morning by stealing a win in Leg 8, with a shocking come-from-behind victory into a foggy Newport, Rhode Island.

One day before the finish, with just 300 miles to go, MAPFRE was in fifth place.

As Tuesday morning dawned, and with the fleet ghosting towards the finish line in extremely light and shifty winds, Xabi Fernández’s team was among the leading quartet, battling in slow motion with Team Brunel, Dongfeng Race Team and Vestas 11th Hour Racing.

And even when the leaders were just 500 metres from the finish line, MAPFRE was still trailing Team Brunel as the pair emerged from the fog within sight of the spectators at the Fort Adams Race Village.

But on approach to the final turning mark, MAPFRE picked up a zephyr of wind to sneak past Brunel and claim what just moments earlier would have been seen as a very improbable leg win. The margin after nearly 16 days of racing was just 1-minute and 1-second.

“This is unbelievable,” skipper Xabi Fernández admitted moments after crossing the finish line. “I can’t be happier. We were always hoping to come back a little bit, but to be honest we were not expecting to win this leg, so we’re super happy.

“Our hopes were always that there would be a compression so we could catch someone… Last night has been crazy how much everything has closed up and everyone on board did an amazing job.”

Bouwe Bekking’s Team Brunel, who had been leading for most of the past week after the equator crossing took a well-deserved second place finish.

“A bit disappointed,” said Bekking when asked about the finish. “But we sailed a very good leg and we can be happy with our performance and how we were going. It’s time to get on top of everything but I think the last couple of legs we’ve showed what we stand for.” 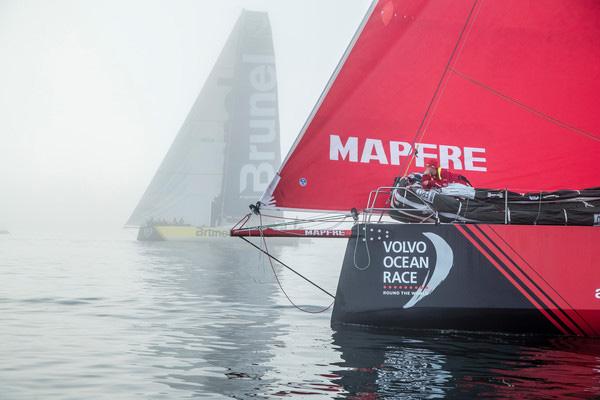 Brunel in the background watched hopelessly as MAPFRE used her advantage of a small puff to snatch the leg 8 honours.
pic by Jesus Renedo/Volvo Ocean Race

Dongfeng Race Team, who had been ahead of the fleet on the approach to the east coast overnight Monday night, suffered the cruellest fate over the final miles.

Every break seemed to go against Charles Caudrelier’s team and after being in position to claim the leg win, the team had to settle for fourth place with Vestas 11th Hour Racing storming past Caudrelier’s crew in the final mile of the leg.

“This leg has had its ups and downs,” said Charlie Enright, the skipper of Vesta 11th Hour Racing. “We didn’t start great but we feel like we sailed pretty well for the middle two-thirds of the leg… Then with some positive input from some local knowledge, we end up back on the podium which is great.”

Newport is a homecoming for Enright and Nick Dana on Vestas 11th Hour Racing as well as Mark Towill who did his college sailing nearby.

“It’s awesome here,” Enright said. “It’s 06h00 local time here and the amount of boats out is absurd. The amount of effort put in by Sail Newport and the stopover here is amazing.”

The final hours were painful for the exhausted sailors, but extraordinary to watch. With the wind nearly shutting down overnight on the approach to Newport, the fleet found itself pushed around by the tide and currents near shore, at times even drifting backwards, away from the finish line.

This meant there was a high degree of uncertainty. Positions were never secure until the finish line was breached by MAPFRE. No one suffered more in the final miles than Dongfeng’s Caudrelier.

“We’re very disappointed,” he said. “We were dreaming about a victory here… But it makes me angry and I will be better on the next one. I am already focussed on the future and I promise Dongfeng will do a fantastic job on the next one.” 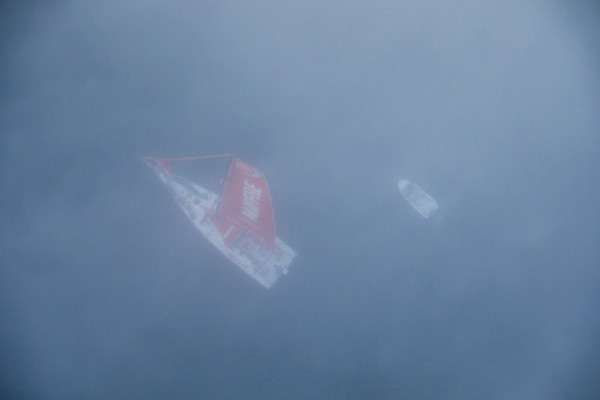 Somewhere in that fog is MAPFRE.
pic by Ainhoa Sanchez/Volvo Ocean Race

The shocking win by MAPFRE has a huge impact on the overall race leaderboard where MAPFRE has regained the lead from Dongfeng, and now sits three points clear at the head of the table. Brunel retains the third podium position.

Fifth across the line was team AkzoNobel, who passed Turn the Tide on Plastic just moments before the finish.

“It was a tricky leg,” said AkzoNobel skipper Simeon Tienpont. “We had moments where we were going well, but we had a few crucial moments where struggled against the other guys. But we’ll learn from that. The upside is the team worked unbelievably hard and that’s good motivation for the rest of the race.”

A sixth place finish was disappointing for Dee Caffari’s Turn the Tide on Plastic, who led for several days early in the leg, and were in the fight with the leading group right up until the last hours, when they slipped back on the final approach.

“We had a really good leg and we thought our battle would be with some of the other boats until out of the fog came team AkzoNobel,” Caffari said. It was a good race, but a disappointing finish… Although it’s great to arrive in Newport.”

The light winds near the finish resulted in a massive compression in the fleet, all the way back to SHK/Scallywag who were trailing the leaders by over 130 miles just one day ago. But as MAPFRE crossed the finish line on Tuesday morning, David Witt’s team was less than 20 miles behind.

“We’re really happy to be here,” Witt said. “The last thing that was important for us was the result. The important thing was to be back in the race after the tragedy (with John Fisher) and all stay together. We couldn’t be more proud of the team… We probably sailed the best we’ve sailed in the race and got the worst result, but we’re glad to be back!”