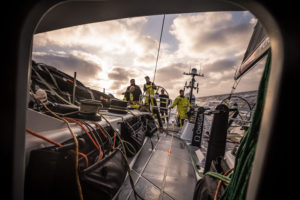 The fleet has not even been racing for 3 days, yet I find the early skirmishes, tactics and the whole aura of the race fascinating.

After the first 65 hours of racing Vestas 11th Hour Racing still occupies the top spot, with MAPFRE and AkzoNobel the only two close enough to be a threat – at this stage. 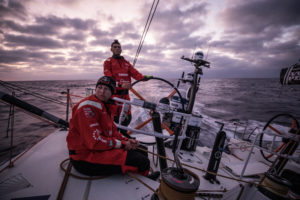 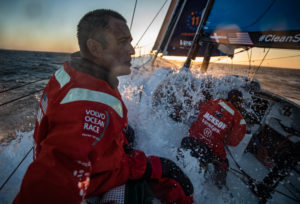 Those who follow ocean racing will know that anything can happen out there, and usually does, so the other 4 boats cannot be considered as ‘also rans’ just yet.

It’s fascinating that the courses of Vestas and MAPFRE diverged significantly yesterday as their navigators sought the fastest course. MAPFRE did pull a few miles back, but at the last position update she was the slowest in the fleet with a true wind speed of just 3.8 knots and a boat speed of 4.8 knots – very slow considering that the fastest boat on the water at that reporting time was AkzoNobel with 9.8 knots of boat speed in 9.2 knots of true wind speed.

Yet MAPFRE had the longest 24 hour distance of 177.4nm with AkzoNobel next at 166nm.

The racing has been tough with MAPFRE putting in 11 gybes in one night!

It’s a navigators race at this point as they begin to line up for the turning mark of Porto Santo which is close to Madeira. Lying between them and Porto Santo is an enormous wind hole 100 nautical miles wide which the navigators must carefully pick their way through before turning and heading strait to the finish in Lisbon.

Selected Comments from the boats
Vestas. “We had a good night overnight, getting fired out of the Gibraltar jet,” Vestas 11th Hour Racing navigator Simon ‘SiFi’ Fisher said. “We were happy to wake up to see that all of the boats are behind us and mostly on our line.”

MAPFRE. “It was tough conditions with winds up to 35 knots, and we had to throw in some gybes,” explained MAPFRE navigator Joan Vila. “Right now we are waiting for the shift to gybe to port, and then we know it will become very tricky and light. To be honest, anything can still happen in this leg.”

Turn the Tide on Plastic. “It got pretty hairy last night and we ended up with 36, 37 knots of breeze downwind gybing through the Strait, avoiding the traffic separation zone,” said Liz Wardley. “But we got through it pretty well mid fleet, and now the breeze is slowly dying out. In a few hours’ time we’re probably going to have a very different breeze of five to seven knots. We’ve had a few transitions to go through and we’re just crawling back into the fleet now after a few losses last night. We’ve got good speed on the guys around us so we’re looking good.”