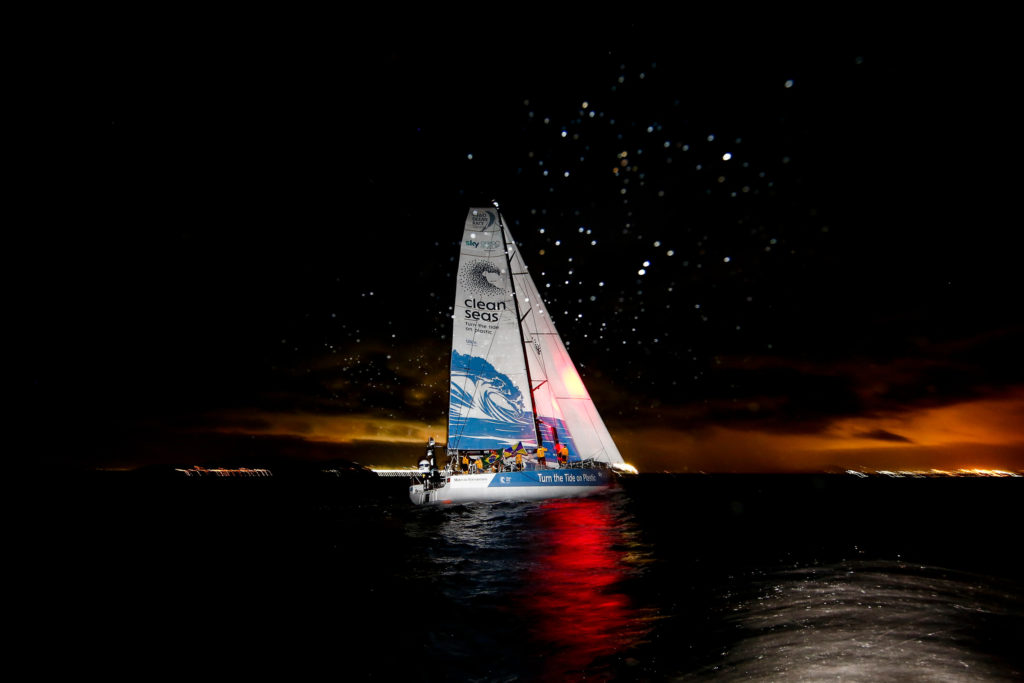 This was always a leg billed as the toughest, yet the one crew were most looking forward to.

It was also the leg in which a man was lost overboard and in which Vestas was dismasted. Plus, MAPFRE had mast damage which she chose to affect temporary repairs too just shy of Cape Horn, and having suspended racing for 13 hours, she ruled herself out of the running for the leg.

And then, after the leading two finished within 15 minutes of each other after 7600nm of racing, the wind appeared to shut down, making progress painfully slow for the rest of the fleet.

“It is unbelievable how slow we are going and how difficult this high pressure is to cross,” wrote skipper Xabi Fernández. “Finally we see a bit of light at the end of the tunnel as we now have 10 knots from the northeast, which is promising.” 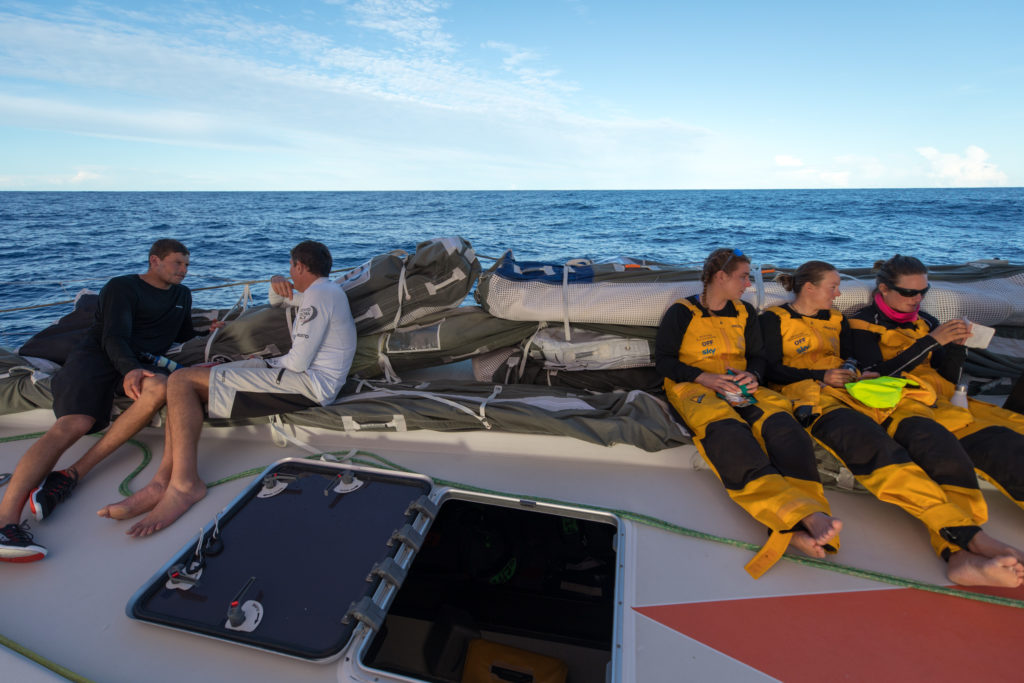 The light winds allowed the crew of Turn the Tide on Plastic to relax a little and take time over their meal.
pic by Sam Greenfield/Volvo Ocean Race

When Dee Caffari’s Turn the Tide on Plastic ghosted across the finish line in fourth place they posted their best result to date, demonstrating the growth of the youngest and most inexperienced team in the race.

“It’s been a monster leg and we’ve come through and we had to work hard for that finish,” Caffari said moments after crossing the finishing line. “But it’s been like that the entire leg. It’s been hard work and these guys really deserve all the credit for coming in fourth place. I’m so proud of them.” 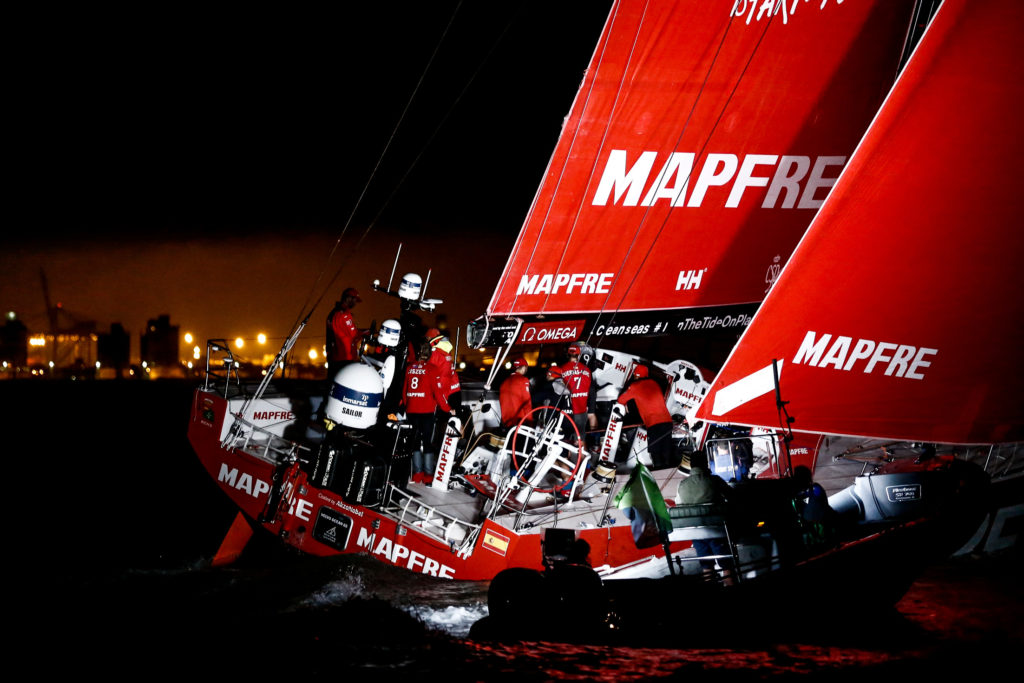 Turn the Tide on Plastic had a good start to Leg 7, taking an early lead and then battling with the leading group all the way through one of the most difficult Southern Ocean legs in memory.

But after passing Cape Horn, the team noticed an issue with its rig – one of the spreaders had moved out of position, putting the mast in jeopardy.

After slowing down for repairs, the team found the leading trio had escaped and the goal became securing a fourth place finish, ahead of MAPFRE. The light conditions over the final days made for an agonisingly slow end to the leg, but the end result was a strong one for Turn the Tide on Plastic.

“The team is growing every leg,” Caffari added. “We proved it in the last leg in the lighter winds and flat water and now we’ve proved it in a big wind, big waves condition as well. These guys can take anything on and I back them 100 per-cent every time.”

When MAPFRE crossed the finish line in 5th spot they handed the overall lead in the race to Dongfeng – with just a single point now separating them at the top of the leaderboard.

“It’s been difficult for all of us,” Fernández said. “We were expecting much better, but it’s not the end of the world, it’s not so bad. 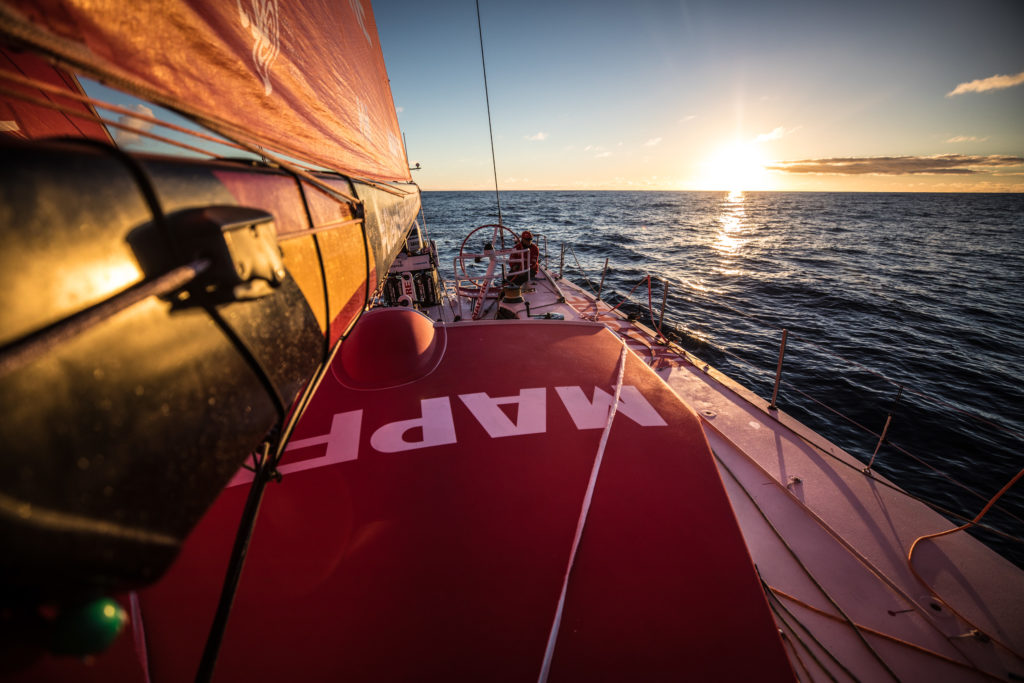 The sun setting behind the transom of MAPFRE as light winds plagued her in the closing stages of Leg 7.
pic by Ugo Fonolla/Volvo Ocean Race

“We were compromised this leg with technical problems, but it’s nothing to do with the crew work or the trust we have in each other. We’ve been going very well up to this moment and I’m pretty sure we’ll keep going well in the future.”

While MAPFRE was able to hang on to the leaders through the gales and hard miles of the Southern Ocean despite a damaged mast track, a torn mainsail at Cape Horn subsequently forced a 13-hour stop for repairs.

Team Sun Hung Kai/Scallywag has now departed from Chile with a delivery crew on board and making a dash for Itajaí.

Meanwhile, Vestas 11th Hour Racing is working hard to get the boat from the Falkland Islands to Itajaí, most likely under motor.