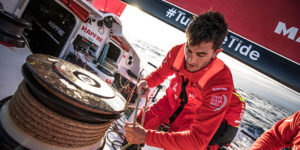 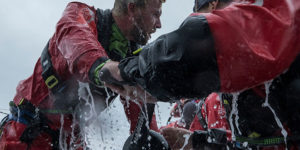 Brad Farrand and Martine Grael at the pedestal onboard team AkzoNobel during Leg Zero.
Pic by James Blake/Volvo Ocean Race 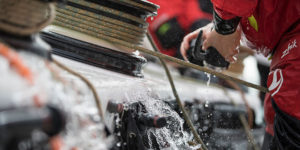 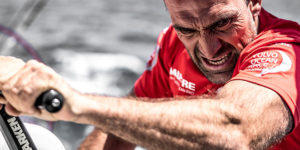 Harken has been named official supplier of winches, blocks, traveller systems and mast car systems for the 2017-18 edition of the Volvo Ocean Race.

It is the second consecutive race that the USA and Italy-based manufacturer has equipped the One Design Volvo Ocean 65 fleet with some of the most advanced deckware products on the market. The agreement ensures Harken hardware will continue to be a fixture of the racing boats when they line up in Alicante on 22 October 2017.

“We’re delighted that the Volvo Ocean 65s will once again feature a wide range of Harken products in 2017-18,” said Neil Cox, Head of the Boatyard, the Race’s shared services maintenance centre, which travels around the world alongside the fleet to keep the boats in tip top shape.

“With the fleet set to sail three times more Southern Ocean miles than in recent editions, the gear will really be put to the test – and we have faith that Harken’s products can withstand the most extreme conditions on the planet.”

Harken has a long and successful history supplying many Volvo Ocean Race teams before officially linking up with the event when the race moved to a One Design fleet ahead of 2014-15, and will supply carbon fibre racing winches, TTR2 Air® blocks, CRX roller bearing travellers, and Battcar systems in 2017-18.

“The Volvo Ocean Race is the toughest test for a team in offshore professional fleet racing. There is no better showcase for our grand prix winches, gearboxes and deck hardware tuned for this extreme event, that we’re very proud to service,” said Andrea Merello, Managing Director Harken/Italy.

In addition to hardware, as it did in the previous edition of the race, The Harken Tech Team will again provide expert assistance to The Boatyard. Assembled from Harken offices around the planet, The Tech Team expertly maintains the Harken winches and hardware at maintenance stopovers throughout the eight-month race.

“When the teams finish a leg, The Harken Tech Team’s race begins. Our best technicians work round the clock to be sure these precisely matched Volvo Ocean 65s are ready for the next leg’s start,” said Mark Gardner Custom Project Manager Harken/UK.

Watch the Video: ‘How to Build A Harken Winch’ HERE