Volvo Ocean Race. Feeling the Sting of the Southern Ocean 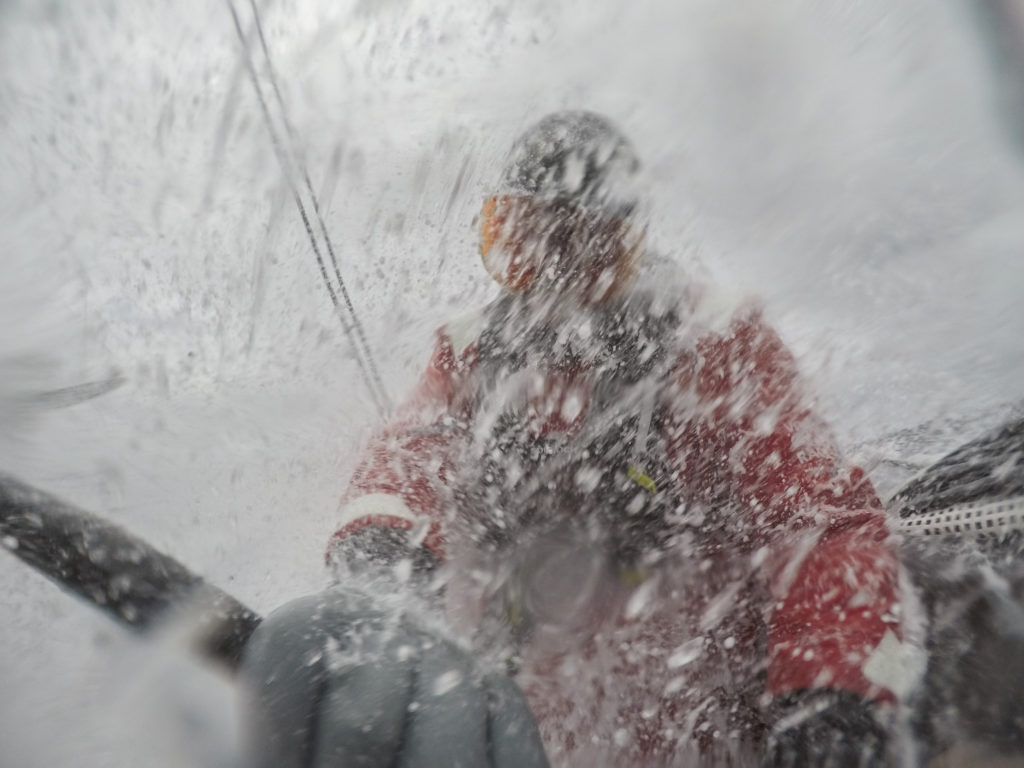 David Witt is in there somewhere on the wheel on board Sun Hung Kai/Scallywag.
Photo by Konrad Frost/Volvo Ocean Race

The Volvo Ocean Race teams were feeling the full strength of the Southern Ocean on Thursday as they were pummelled by winds gusting as high as 50 knots and surfing down mountainous waves. 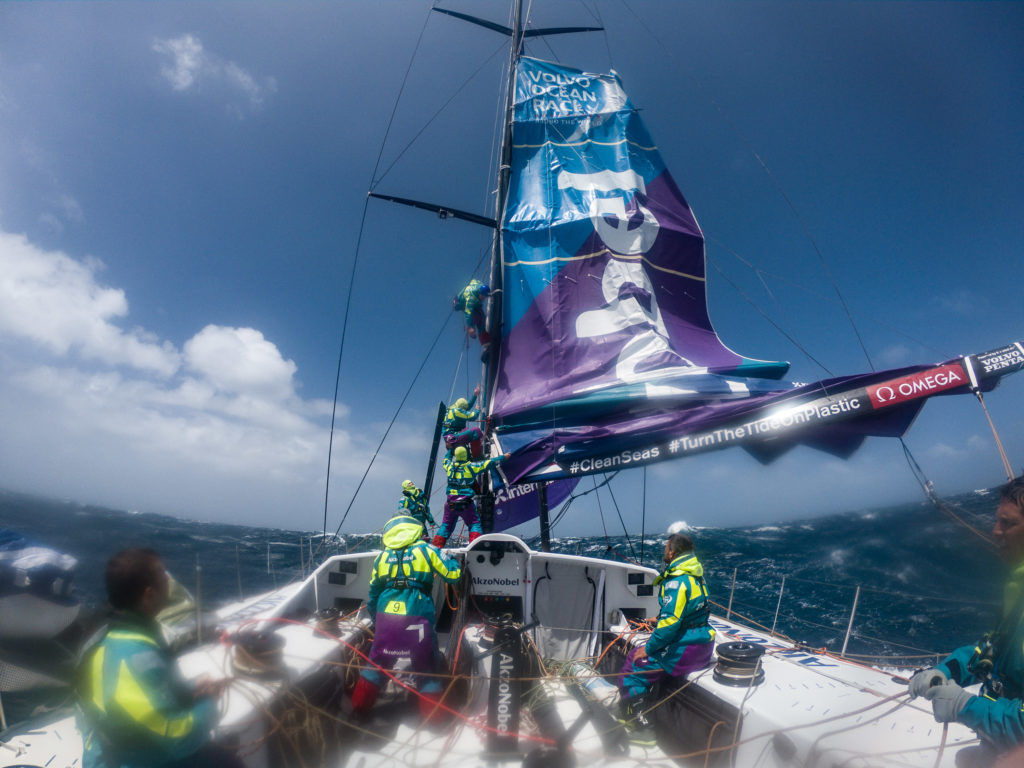 The deep low-pressure system that has been forming for the past few days has now engulfed the seven crews, forcing them to switch from all-out racing to a more conservative mode.

Nevertheless, boat speeds rocketed to an incredible 38 knots as the Volvo Ocean 65s were launched down the faces of enormous Southern Ocean rollers. 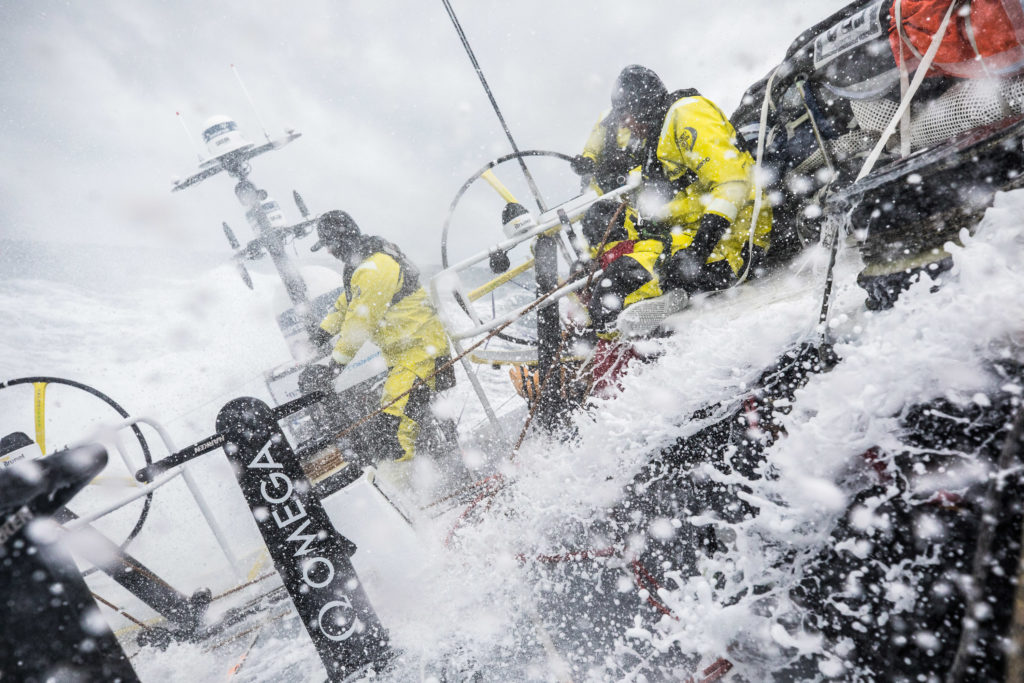 On board Brunel, Alberto Bolzan at the helm, Kyle Langford holding the mainsheet and Carlo Huisman at the aft pedestal – Southern Ocean Mode ON.
Photo by Ugo Fonolla/Volvo Ocean Race

The low pressure system responsible for the hammering is vast, stretching almost 1,500 nautical miles from the tip of South Africa to just a few hundred miles north of Antarctica.

It represents the biggest challenge so far in the 2017-18 Volvo Ocean Race, and, although Leg 3 from Cape Town to Melbourne is still in its early stages, the decisions the teams make now could have serious consequences on the results.

Ten miles to the north MAPFRE continued the chase, with Vestas 11th Hour Racing filing in around 50 miles behind them.

“Conditions are full on,” Vestas 11th Hour Racing helmsman Mark Towill said as the crew reported seeing gusts of 53 knots of wind overnight. “We’ve had 30 to 40 knots for 24 hours now – we’re rocketing downwind. It’s full on Southern Ocean conditions but good fun. We knew what we were coming down here to find, and we’ve definitely found it.” 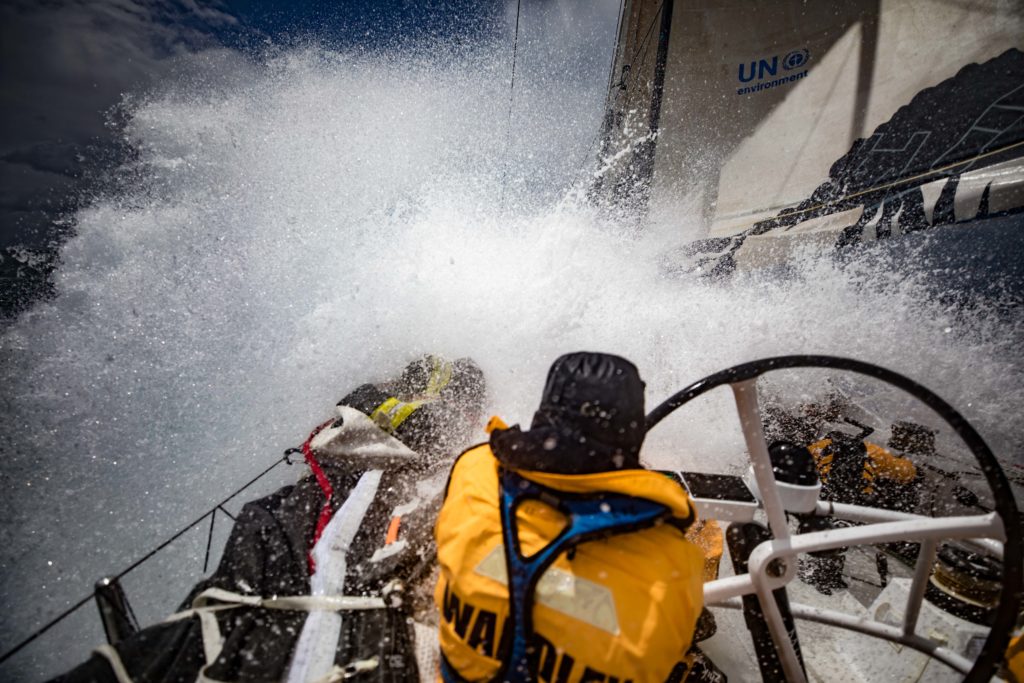 Eighty miles behind MAPFRE, Simeon Tienpont’s team Akzonobel were forced to hit the brakes after suffering damage to the track attaching the mainsail to the mast.

Navigator Jules Salter reported that the damage occurred as the crew were gybing in 35 knots of wind and big seas.

“During one gybe from starboard to port the mainsail track on the mast was damaged in two places,” read a statement from the team. “The sailors were able to lower the mainsail and turn the boat away from the AIEZ and are continuing to race using the boat’s forward sails only.

“There are no reports of any injuries on board as a result of the damage and the crew is liaising with Volvo Ocean Race’s race control staff and the team’s land based technical shore crew to establish what repair options are available to them.”

Almost 250 miles to the north, Team Sun Hung Kai/Scallywag were avoiding the worst of the weather having practically swapped positions with Turn the Tide on Plastic – but even they haven’t been able to completely escape.

“Why do we all rave about coming down here?” skipper Dave Witt questioned, half-jokingly. “Do we think we’re tough or something? I don’t get it. We’re all ‘Southern Ocean, Southern Ocean’. I’m over the Southern Ocean.”